Everybody wants to know the secrets of the 87-year-old “Flying Granny.” Did McHugh just get lucky with good genes? Or has her running somehow helped shield her body from the normal effects of aging? Madeleine Cummings explores the life of Canadian Betty Jean McHugh, the world’s fastest female octogenarian. 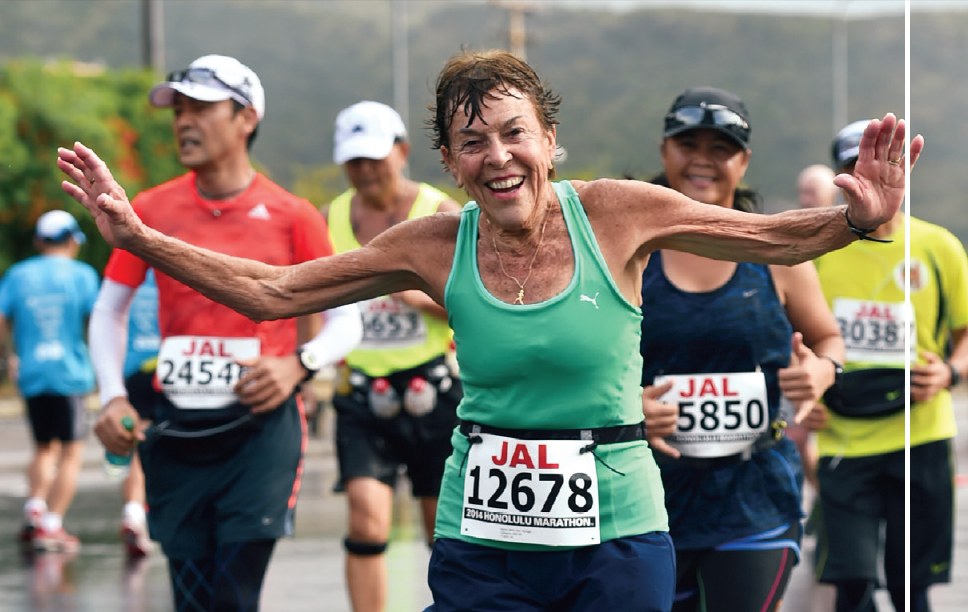 “I’m not one to sit a lot,” says Betty Jean McHugh, no doubt standing as she talks to me from her North Vancouver home before she’s about to go for a run. While other older women’s bodies have weakened, McHugh’s has somehow retained the muscled appearance of someone at least 20 years her junior. But at 87, she not only looks decades younger than she is – she also runs faster than anyone even close to her age on the planet.

According to the Association of Road Racing Statisticians, McHugh holds 17 world single-age records in distances ranging from 8k to the marathon. She earned her latest at Vancouver’s First Half-Marathon by running 2:43:30, a time that buried the previous record by over 30 minutes. 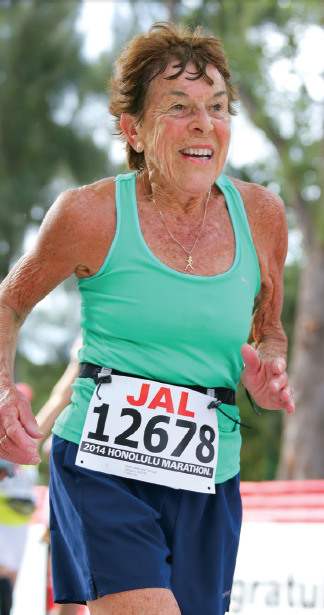 McHugh has been running and quietly setting records for nearly 40 years, but her speed and longevity in a sport long derided as detrimental for aging athletes has only intensified recently. Exercise physiologists brought her into their lab at McGill University a few years ago in order to study her remarkable fitness. Media requests flood her email inbox with growing regularity. And ever since she ran away with a new marathon record in Honolulu last December, more people than ever have been flocking to her Facebook fan page. After that race, women approached McHugh and asked to shake her hand. “It’s been insane ever since,” she says. Many of them are older women who tell her, “If it wasn’t for you, I wouldn’t be here.”

McHugh has been stopped so many times on the street that she’s taken to carrying a copy of her memoir with her
wherever she goes.

Everybody wants to know the “Flying Granny,” but more specifically, they want to know her secret. Did McHugh just get lucky with good genes? Or has her running somehow helped shield her body from the normal effects of aging? Though both are probably true to a certain extent, McHugh’s success has proved to generations of women – in Canada and abroad – that athletic accomplishment doesn’t have to end at age 50.

McHugh didn’t even become a runner until she was 50, though she was always athletic. She hauled bales of hay with her father on the farm she grew up on near Campbellford, Ont. She spent the first 50 years of her life playing tennis, skiing, hiking and cycling. While she was working as a nurse at a Vancouver hospital, a patient in her ward offered to take her skiing once his injury healed. She agreed and eventually got married to Bob McHugh, settling in Vancouver for good, regularly spending weekends on the slopes.

McHugh didn’t push her children to succeed in sports but she did place a high value on being active. Her son Brent recalls a strict television limit of one hour per day. “The rest of the time we weren’t even allowed in
the house,” he now jokes. McHugh’s insistence that her children be active paid off – her daughter Jennifer swam for Canada at the 1972 Olympics. 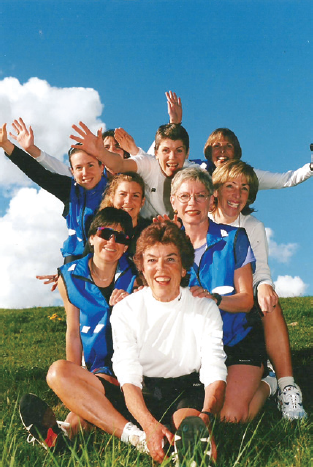 While Jennifer was at her early-morning swim practices, McHugh passed the time by slapping tennis balls against a black board at the Stanley Park courts. After a policeman showed up one day to admonish her for using the courts before they opened at 7 a.m., McHugh moved over to the Seawall, where she walked briskly and ran on occasion. This was the 1960s, though, and running for no reason felt like something she shouldn’t be doing. She didn’t know anybody who ran. She just knew she preferred moving around outside than spending her early mornings sitting in a car, waiting. Even now, when faced with the choice of walking or driving somewhere, McHugh almost always chooses to use her feet.

She started running more regularly when the rest of North America did, just as the jogging craze took hold in the early 1970s. She was in her 50s, and taking a fitness class that included a running warm-up. Not long after discovering that she liked jogging and she had some speed, she signed up for her first 10k. “I ran it in tennis shoes,” she recalls. “I didn’t know anything about jogging shoes.”

Most athletes’ bodies start to decline in middle age, but McHugh’s seemed to only get stronger. By 60, she was regularly pounding out 44-minute 10ks and even besting times she had ran six or seven years earlier. She sought out
races that offered prizes for runners who won their age categories and became outspoken against race organizers 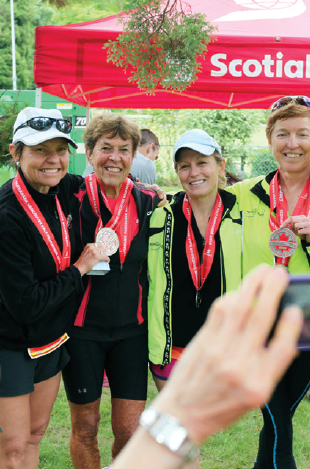 who didn’t offer men and women the same prizes. In Vancouver alone, she suspects she ran almost one 10k a month between 1980 and 1984 – at a time when women couldn’t yet compete in that distance at the Olympics. In 1988, she ran 14 races between March and November, and felt, as she wrote in her memoir, at peak fitness and in the best shape of her life. This was just the start of her success.

Unfortunately, this period also marked the start of her husband’s struggle with dementia. Bob was a loving husband who spent many mornings cheering for his wife from the sidelines of races. As his mind deteriorated and the situation increasingly painful, running became McHugh’s much-needed release. Though she never minded caring for Bob, she would use running in order to cope with her sadness and anger of slowly losing her partner. After he eventually moved into a long-term care facility, she would visit and the two would walk together
every day. In December of 2012, four months after Bob
died, McHugh went on to set another world record at the
Honolulu Marathon.

When researchers from McGill University invited McHugh to Montreal to take part in a study on “super seniors,” Margaret Webb documented the experience in Older Faster Stronger, her own book about striving to become a better athlete later in life. Webb watched, stunned, as McHugh spun feverishly on a stationary bike, scoring a 46 on a VO2 max test. Her result was twice as high as most women her age and about the equivalent of a university-aged student.

It’s easy to write McHugh off as a genetic freak. But there’s plenty of evidence out there that suggests regular
exercise, and especially high-intensity activities like running, can reverse some of the effects of aging. One
American study found that athletes who did activities such as interval running lost about five per cent of their 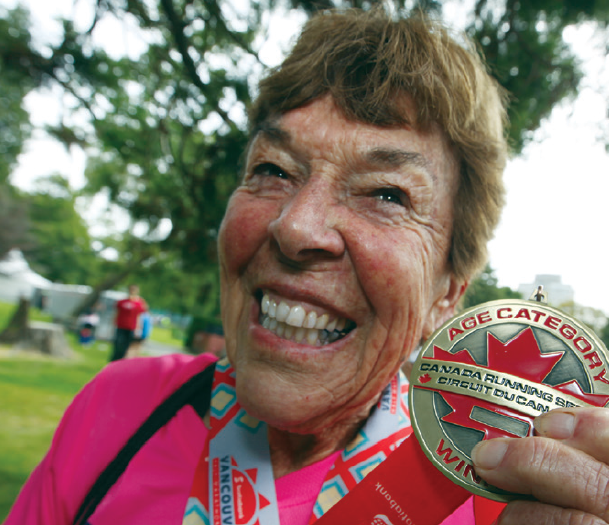 endurance capacity per decade. Sedentary adults, on the other hand, lost twice as much. A study from the Stanford University School of Medicine, which followed 500 older runners for over 20 years (and compared them to a similar group of non-runners) found that elderly runners had fewer disabilities and lived longer.

Running forms the bulk of McHugh’s exercise regimen but over time she’s also become dedicated to cross-training. In addition to running about 60k a week (including track intervals, hill repeats, and a long run on the weekend), she spins (cycling was also a big part of her training until a bad fall made her worry about injuries), does yoga, and lifts weights. In May, she spent two weeks walking the 200-plus-kilometre Camino de Santiago from Porto, Portugal to Santiago, Spain.

It sounds like a lot and it is, but those who know McHugh insist her approach to running is actually quite casual. She doesn’t have a coach. She’s not a relentless goal setter or fanatical about getting in a certain number of kilometres per day. She prefers halfs to marathons. For years she skipped the Vancouver Marathon because it coincided with her wedding anniversary. It’s not uncommon to find her sipping a glass of wine the night before a big race.

She’s also not immune to the ills that plague even the most diligent among us: a pesky hamstring, freak injuries that lead to months of cross-training, and even a lack of motivation. Though her training partners know she has a “no-whining policy,” (her rule: no matter how awful you feel, you finish the race, unless you have an injury) she sometimes wakes up in the morning and wishes she could fall back asleep instead of getting up to go running. She almost always gets out of bed anyway. “If I don’t,” she says, “I find I procrastinate during the day.” 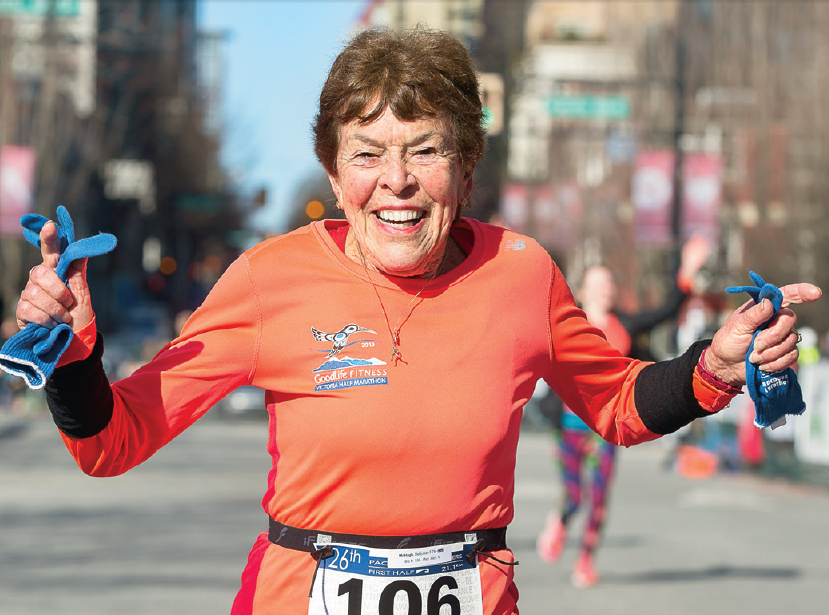 There’s a lot to find inspiring in McHugh’s life, which is less a ref lection of luck and genes than it is an accumulation of repeated good habits: walking everywhere instead of driving, varying her athletic activities, and paying attention to what she eats (admittedly, “a lot of salads,” but also the odd bowl of vanilla ice cream).

But for female runners, especially, she’s the ideal role model – not because of all the records she’s amassed but
because she’s proof that a little time outdoors can go a long way towards lengthening and enhancing life.

Best of all, “she is not one of those sanctimonious fitness freaks,” says Robin Pascoe, a longtime fan who first spotted McHugh lifting weights in her local gym almost 20 years ago. Even in a place like North Vancouver, where Pascoe likens fitness to a religion, “she’s not trying to convert anyone, just set a great example for us.”