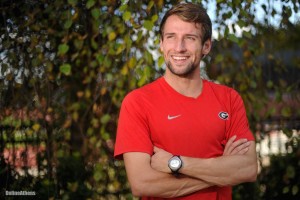 Most Canadians will know the name Rob Watson, who is predicted to be the fastest Canuck to finish the Chicago Marathon on Sunday, but one of his training partners is also looking to make a name for himself in the Windy City.

Brandon Lord is making his marathon debut in Chicago after several years tearing up the track and cross-country at the University of Georgia. He recently moved to Charlottesville, Virginia to train with Rob Watson under the guidance of Rob’s brother Pete.

We caught with Lord on his way to the Windy City (he was driving to the airport in Richmond, VA to catch a flight to Chicago) to chat with him about his training.

CR: Tell us a bit about yourself and how you arrived at running the Chicago Marathon.

BL: I was born in Sudbury, Ont. but moved to Tennessee when I was five and spent many years living back and forth between Canada and the U.S. I started running track and cross-country in high school then spent five years representing the University of Georgia (Bulldogs). After using up my college eligibility, I reached out to Pete Watson in Charlottesville and starting training while attending grad school (working towards a Masters in Business/Commerce). Pete was debating between Berlin and Chicago for Rob so it made sense that I go along too. Chicago also made more sense as it gave me a bit more time to train, is a fast course and also means I don’t have to skip much school.

CR: How has your training and build up for Chicago gone?

BL: After coming back from the World University Games, I knew it was going to get tough and we would be putting in some serious training. Aside from a single workout early in the season when I struggled and felt sluggish, I’d say I was 95 per cent able to keep up (with Watson) and felt really good. I didn’t run the mileage that Rob does but hit all the major workouts. All in all, I’m feeling really fit.

CR: What are your goals or desired outcomes for Sunday’s race?

BL: Ultimately I want to have a positive first experience at the distance. Originally, I didn’t have a time goal in mind but I’m now feeling confident I can run somewhere between 2:15 and 2:20. Honestly I’d be thrilled to run 2:15 high. Chicago attracts a deep and competitive field and there will be a bunch of guys gunning for the U.S. Olympic Trials standard of sub 2:18 so I should have some good company for a good deal of the race.

CR: Do you have any long-term plans or what’s next for you?

BL: I’m really enjoying the road running scene and I feel it fits to my strengths as a runner. I have been told that I am a marathoner so will hopefully find success at competing at the longer distance stuff. In the short term, I’m planning to run the Houston Half in January and depending on how that goes, will look to compete at the World Half Marathon Championships in Wales in March.

CR: Thanks again for taking the time to chat with us and all the best in Chicago on Sunday.