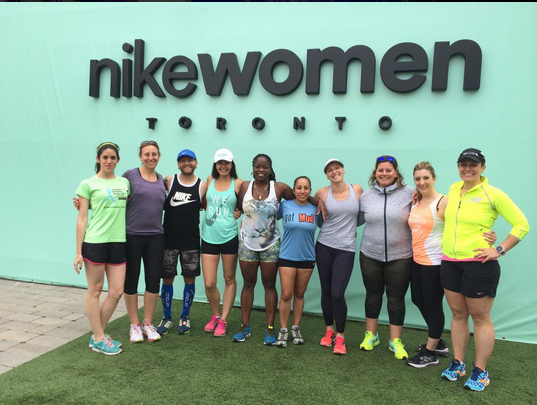 Today Toronto’s islands were taken over by women runners racing the Nike Women’s 15K. The Nike series is the largest women’s race series in the world and has grown to be quite the popular event. Around 10,000 women raced today.

Many Canadian women may have looked towards the San Francisco running community with envy in years past. This is the first year the event has come to Toronto. Prior to today, San Francisco’s race was the closest for Canadians.

The 15K route took runners along all three islands passing beachy views, the airport and stretches of boardwalk. It started and finished at Toronto’s Centre Island.

In first place was Edmonton runner Paula Findlay. Findlay ran 53:40. Second was Waterloo, Ont. runner Erin McClure who ran a 53:59. The third place runner was Melanie Myrand from Pierrfonds, Que. She ran the 15K route in 55:17.

The weather was rainy for most of the race today but finishers were happy to receive a Tiffany & Co. necklace as their race medal. Below is a gallery from the race today.

I’ve run the Island many times but this view from the tarmack was a first! Awesome #nikewomen15k! #niketoronto pic.twitter.com/tCaVaaDojt