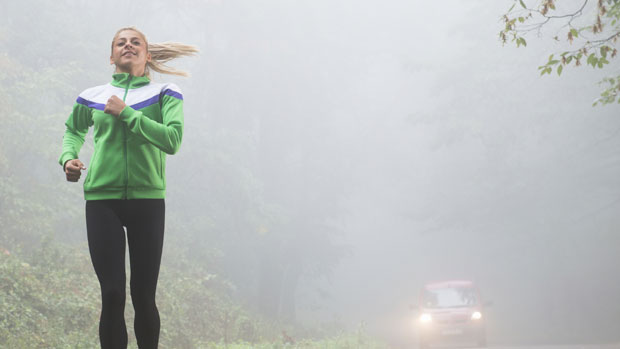 As runners (along with our cardio-happy companions, cyclists), we often find ourselves complaining about drivers that disregard our right of way in certain situations, or are simply oblivious to our presence. In fact, I was once bumped (very lightly) by a woman who rolled through a stop sign; that was when I learned to never assume a car is going to stop. In the case of car versus runner, the car almost always wins.

What I want to talk about right now though, is an inverted situation that I found myself in recently. While I am a runner, in this case, I was the driver and was shocked by the behavior of a runner towards me.

The situation: I was stopped at a stop sign, about to turn right, a group of runners approaching in my rearview, running in the middle of the road. Since I run this area myself, I knew they were running on the road because the sidewalks are a skating rink of ice. Due to the size of the snowbanks the usually-two-lane street had been essentially reduced to one and there wasn’t room for us al.

As I continued driving, I was stunned a fellow runner would behave that way. Had I crossed the line into the territory of evil drivers who think they own the roads?

I went over what had happened again in my mind. I knew if I had been part of the running group, I would have stepped up onto the sidewalk like the rest of the group did. I recalled back to when I was bumped two years prior, recalled that, even in that situation, I did not give the woman the finger, or smash my fist on her car.

We share the roads, but we’re are also not cars. Both drivers and runners need to be considerate of each other; run with drivers in mind and drive with runners in mind, and keep your fingers in your gloves. That driver might be a runner themselves.