The host of Toronto’s Metro Morning started running every day on Jan. 1, 2015. He ran 365 consecutive days to fulfill his running resolution. 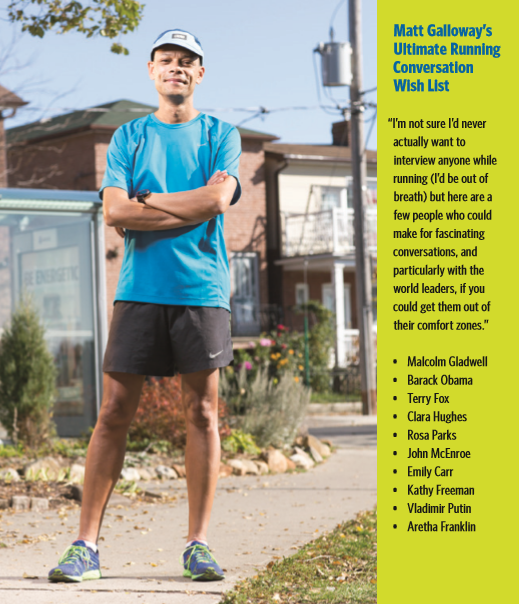 When you’re the host of a morning radio show, your day actually starts in the middle of the night.

Matt Galloway’s workday starts at 3:00 a.m. By 5:30 a.m. he’s on-air, talking about what’s going on in his city, the country and around the world. He bikes in the darkness to the CBC headquarters and is done work before most employees go for their morning coffee break.

Several years ago, Galloway decided he needed to challenge himself to do something constructive with the time he had in the afternoon, particularly after his kids reached school-age. A few years ago, he mastered baking bread from scratch. “The following year, I got pretty good at playing the ukulele,” he tells me from his home, before he’s about to go for a run on an October afternoon. Even through a long, demanding federal election campaign, Galloway managed to get at least a 30-minute run in. The 45-year-old has made running — every day for a year — his 2015 project. He hasn’t missed a day yet.

RELATED: Matt Galloway on his 2015 resolution and running in Toronto

“My brother was the athlete in school,” Galloway says, reflecting on his late discovery of the one sport he truly loves. “I was the nerdy book guy.”

It all started four years ago, when he was discussing the marathons in Toronto on his show. “We were discussing how exciting it is, but I couldn’t figure out the joy that runners were getting out of it,” he now admits. So, that Sunday of the race, he and his wife and two daughters stood out in the rain and cheered the runners as they passed by. He came back inside and knew he had to try running.

“When I first started, I’d never run before, so it was awful and painful – but it was fun,” Galloway laughs, looking back on the painful progression in the first few weeks. “Then I ran a 5K and went from there.”

As 2014 was coming to a close, Galloway started brainstorming his 2015 afternoon project. “I thought, ‘What if I ran every day? What if I went out tomorrow morning and started running and didn’t stop?’ It seemed like an insane idea – it still does,” Galloway says, laughing at himself.

But for Galloway it’s turned into a personal epic. His show Metro Morning focuses on what makes Toronto an interesting place.

“Because of this, I spend a lot of time with my day job exploring the city,” he says. “With running, you see things differently.” But for Galloway, his post-work run is mostly his time to wander in his thoughts, disconnected from his life in the media. “I love running in Toronto’s ravines. I run up to the Cedarvale ravine, to the Beltline Trail. At certain points, I forget where I am,” he says. “I don’t bring a phone; I’m not ‘on’ and I’m seldom thinking about work. It’s a window for myself.”

Rules of the resolution

Each day for all of 2015, Galloway committed himself to at least 5K of running. “That was sort of the rule. I haven’t been injured and I haven’t been sick,” he says, fully aware that he’s had a fortunate streak of good health, perhaps in part because of the positive effect running has on the immune system. “Friends said at the beginning, ‘Well just run a minimum of 1K.’ But I feel like I haven’t actually gone for a run in that case,” he says. On weekends, he goes longer, usually 10–15K.

RELATED: Should I start a running streak?

Throughout the year, Galloway’s running streak led him to see places during his travels differently than he would have without his daily commitment. “I was in Vegas and went for a run at dawn down the strip. That was wild. Most people are coming back from a long night out. I even ran through a casino.” Later on that trip, in the Arizona desert, Galloway got completely lost on an array of trails. “I thankfully took a phone at the urging of my wife, and was able to track back.”

Through all of this, Galloway says that the single biggest challenge has been one that every runner faces. “The hardest part every day is just deciding to get outside and run.” Galloway’s trick for motivating himself is equally as simple and relatable: “I always remember that, when you finish a run, you can’t believe that you weren’t going to do it in the first place.”

And what’s next for Galloway now that his 2015 run streak project has come to an end? “I think I’m ready to run a half-marathon in 2016,” he says with excitement in his voice. “And after New Year’s Day, I’m going to just keep running.”

Editor’s note: This feature appeared in the January/February issue of Canadian Running.