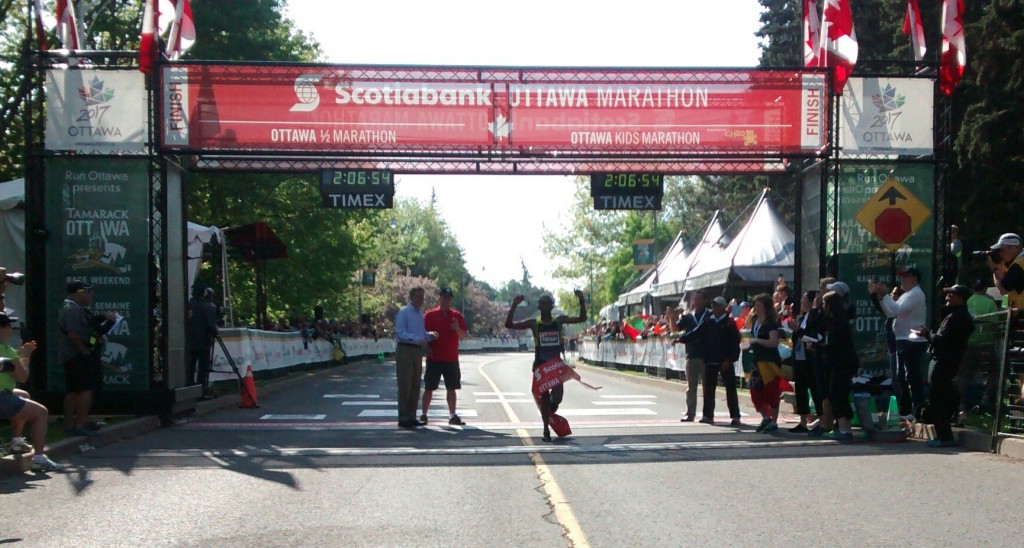 Both men’s and women’s course records were sliced down by large margins on Sunday morning at the Scotiabank Ottawa Marathon by a pair of Ethiopian elites.

On a day that many worried may be too hot for running marathons, there were plenty of fast times. A thick fog — at times so thick you couldn’t see the Ottawa River below while crossing bridges which span it — kept the sun off racers backs helping them through the race.

Yemane Tsegay raced to a 2:06:54 to smash a previous course record of 2:08:04 set last year by compatriot Tariku Jufar. The mark also betters the Canadian soil record, breaking the previous mark of 2:07:05 set last fall at the Toronto Waterfront Marathon.

Tsegaye holds a PB of 2:04:48, making him among some of the fastest runners of all time. He recently also broke the course record at the Daegu Marathon last month.

There was a group of seven runners, including two pacers, who went through the halfway mark in 1:02:47 but the 29-year-old broke away from the group, along with his pacer, shortly after. A few kilometres later the pacer also doropped off leaving Tsegay alone for much of the second half of the race.

“I had, after 30K, a little bit of pain. After 30K I was on 2:05 pace.” said Tsegay after the race. “The weather conditions were not great with lots of fog and the course is up and down; lots of hills. But I ran 2:06 for the course record and I am happy to get the record.”

The Ethiopian will take home a nice prize purse of USD$40,000 and a new Hyundai Sante Fe. The prize breakdown is $20,000 for the win, an extra $10,000 for breaking the course record and another $10,000 plus the Sante Fe for breaking the Canadian soil record.

The top Canadian male was Eric Gillis, running 2:13:46 to be the eighth overall finisher.

“Whenever you get a Canadian championship it’s a nice treat,” said the 34-year-old. “I was consistent out there in the race and even split it with some of my faster kilometres towards the end.”

The Guelph-based athlete was paced in the early stages of the race by his training partner, Reid Coolsaet, but Coolsaet fell off earlier than anticipated at 15K. Gillis managed to run with another pacer from a group ahead after closing the gap after Coolsaet slowed down.

Ethiopian Tigist Tufa smashed her own personal best and the course record by running 2:24:32. Her pervious fastest time was 2:28:04 from Los Angeles last year.

“After this race, I will improve my time,” said Tufa after the race, confident she can run faster still. “The weather was really nice and the people were really nice.”