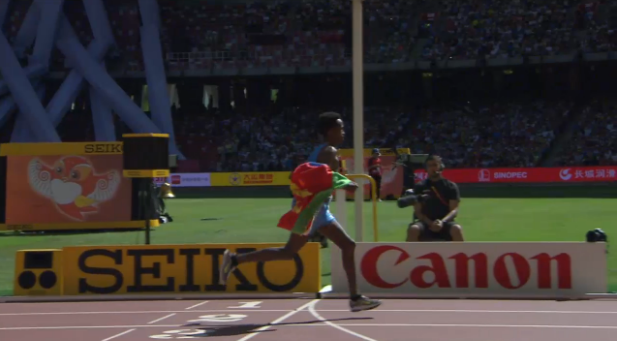 Beijing, Aug 22, 2015 (AFP) – Unheralded Eritrean teenager Ghirmay Ghebreslassie claimed the first gold of the Beijing worlds when he sprinted away for a comfortable victory in the men’s marathon on Saturday.

The 19-year-old took the lead from Lesotho’s Tsepo Ramonene Mathibelle on the 36K mark and saw off pressure from Ethiopian Yemane Tsegay for a memorable win at Beijing’s iconic Bird’s Nest stadium.

Ghebreslassie, racing just his third marathon, clocked 2hr 12min 27 seconds, with Tsegay, fourth in 2009 and eighth in Moscow two years ago, taking silver in 2:13.07 and Munyo Solomon Mutai of Uganda claiming bronze (2:13.29). It was Eritrea’s second ever world medal after Tadesse Zersenay’s silver in the 10,000m in the 2009 worlds in Berlin.

Mongolia’s Ser-Od Bat-Ochir had his moment of world fame when he took the lead for a few early kilometres, quickly swept up by the chasing pack, Bahrain’s Ethiopian-born Shumi Dechasa setting much of the early pace. The runners swept through the 10km mark in 31:51, and a surge through the following 5K saw the pack string out with Dechasa up front, Uganda’s defending champion Stephen Kiprotich just 5sec off the pace in the chasing
pack.

A definitive break predictably saw the Ethiopian trio of Lelisa Desisa, Tsegay and Berhanu Lemi, Ugandans Kiprotich, Mutai and Jackson Kiprop, and Kenyan trio Dennis Kimetto — the world record holder, Wilson Kipsang and Mark Korir all eyeing each other up.

Eritrean duo Ghebreslassie and Amanuel Mesel were also in the mix as Italian team captain Daniele Meucci shot out to the front on the picturesque course around the streets of Beijing in clear, hot conditions with temperatures around 27 C.

Meucci, the 2014 European marathon champion, went through 20K in 1:03.23, teammate Rugero Pertile taking up the running. The Italian duo struck out on their own, but were sucked in on the 25K mark, Lesotho’s Mathibelle sprinting away after 90 minutes of running and building up a 25-second lead.

Ghebreslassie set out after Mathibelle, overtaking the flagging Lesothan on the 36K mark. Tsegay was on his heels, with Mutai in third, the Eritrean nervously looking at his watch and over his shoulder as he tried to pace himself through the final few kilometres under an increasingly hot sun. The duo were neck-and-neck as the approached the Bird’s Nest, but Ghebreslassie produced one last kick, punching the air and snatching his country’s flag as he entered the stadium for the final 100 metres.

There was no luck for Kiprotich, who missed out an unprecedented three consecutive global championship marathons after previously winning golds at the London Olympics and the Moscow worlds. The Ugandan eventually finished sixth (2:14.42), with Kenya’s Kimetto, the world record holder after setting 2:02:57 in Berlin last year, pulling up after 1:38.