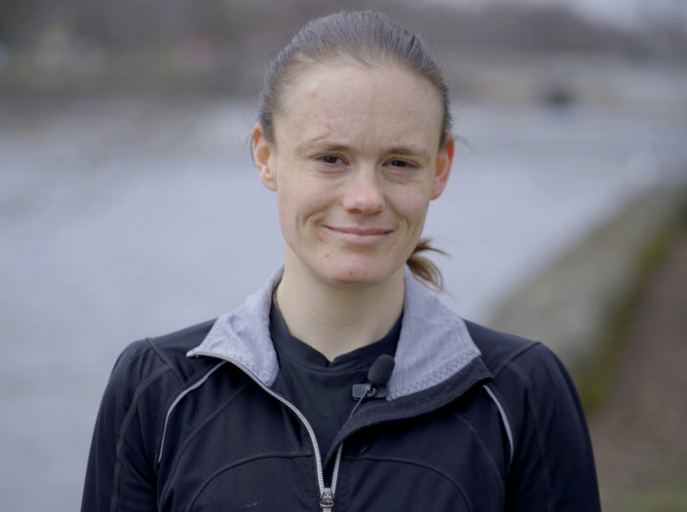 Late last week, we released our 2016 special feature on Jennifer-Lynn Schneider, a story about recovering addict who just raced the 2016 Boston Marathon. For five years, Jennifer-Lynn Schneider struggled with a crystal meth addiction in Guelph, Ont. Living on the streets, she discovered her talent for running when she had to run to work one day– or be late.

>> Boston 2016 Special: I left my meth addiction behind for running

She ended up in the racing scene in Ontario still addicted to the drug and eventually ran the Waterloo Marathon, won it and qualified for the Boston Marathon. That’s something that many recreational runners aspire to be able to do. These days, Schneider is using the sport to help her stay away from drugs and on Monday, April 18, she ran the Boston Marathon finishing with a time of 3:25:23. That was a personal best (PB) for the runner as well as another Boston qualifying time– something which she is thrilled with.

“I got a PB on one of the hardest courses,” says Schneider adding that she’s excited about the BQ time as well. “I’m going every year.”

As for the Boston experience, she said she rates it 85 to 90 per cent. “To travel was very exciting,” she says. “The hotel room was awesome.”

This week, she’s focusing on resting and recovering because, as she explains, the hills on the streets in Boston really battered her quads. “When they say it’s a quad killer, it’s a quad killer,” says Schneider. During the marathon, she enjoyed the warm weather, ran well and she’s satisfied with her time.

There’s lot to love about running on the streets of Boston– the energy is incredible and the crowd is as excited as those who are on the course. This was the largest race Schneider has been to. In fact, she hasn’t set foot in the U.S. for over a decade. She was excited to have been able to be in that atmosphere.”There’s lots of people cheering you on,” she say. “I ran without music for the first time and I’m glad I did.”

Her dad, Uwe, and stepmom, Ellie, watched her race from their home in Guelph. They are being proud of her in persevering to change her lifestyle to that of a runner. “They were really excited,” she says. “They said ‘Is this your life now?’ I said ‘Yeah.'”

And her parents weren’t the only ones showing their support from her hometown. She says that when she finished the marathon, she had congratulatory messages on her Facebook from those who are supporting her. That’s something that’s incredibly important to her.

And from Schneider’s end, she’s also giving back to the people from Guelph while she’s running. As she has mentioned before, there are addicts in the city who look up to her and are inspired to get clean because of her accomplishments. “I spoke to some of them,” she says. “They were all really proud. I know they were cheering for me.”

So for the entire 42.2K, she had those people on her mind. “Every time I stepped on one of those timing mats, I said ‘That’s for Guelph,'” says Schneider.

So what’s happening going forward? The people who organize the Waterloo Marathon, where Schneider’s success all started, have invited her back. “I’m going to attempt to do Waterloo. We’ll see what happens,” say Schneider.

That race date is on April 24.

Didn’t get a chance to look at our web feature? Interact with the video and audio clips of Schneider telling her story here.