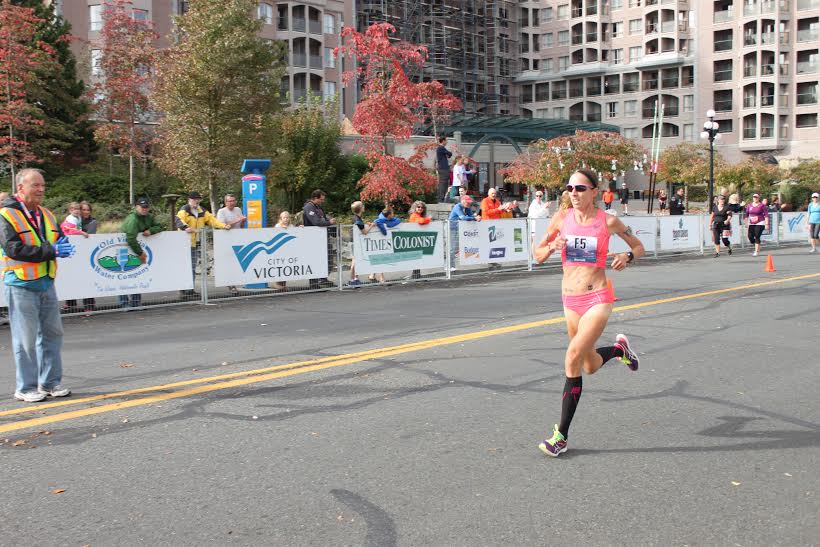 Erin Burrett, a Canadian runner from Nanaimo, B.C. has certainly had an exciting fall this year. Burrett, who is a lifelong runner made her debut in the marathon at the Victoria Marathon over Thanksgiving weekend. She placed first in the women’s race running a 2:39:17 at her first crack at the distance and beating Lioudmila Kortchaguina, one of Canada’s most speedy females in the racing scene. We caught up with Burrett about her goals in running.

Canadian Running: How did you decide to get into the marathon. Tell me about your running background and working up to the distance?
Erin Burrett: After high school I found myself burnt out so I took a break from running. I ended up coming back into road racing off and on and then picking it up more seriously in late 2008. In the last few years, I found that I felt strongest as the races got longer so my coach (Matt Clout from West Coast Endurance) and I always figured I would end up as a marathoner. I don’t seem to have the turnover required for the shorter distances. I was initially supposed to debut last fall but a stress fracture in late May put those plans on hold.

CR: Did you have a time you were aiming for?
EB: Yes and no. I had been doing most of my training at 2:38 pace but due to the rolling nature of the course in Victoria, Matt had said anything sub 2:42 would have been good for my first attempt. Deep down though, I definitely wanted sub 2:40. I wasn’t exactly sure what to expect having never raced further than a half before. I knew that anything could happen in the marathon. I didn’t pay attention to my overall time throughout the race and only saw the clock for the first time when the finish line came into view. I was pretty happy to see the clock at 2:39.

CR: Did you expect to win?
EB: While I can’t say I expected to win, it was definitely in the back of my mind. I had told my coworkers leading into the race that I was going for the win if I had a chance. When I found out that two women who were ranked ahead of me had dropped out, I knew my chances of winning increased. I had a feeling that it would come down to Lioudmila and myself if I ran a good race. I was only 20 metres behind at 36K when she turned around and saw me. She picked up the pace and increased the gap. My left glute and hip gave me a slight problems. Even with one kilometre to go, I didn’t think I was going to win but I started gaining ground fast and my legs still felt great. I pulled ahead with 300m to go. Breaking the tape was a mix of emotions from completing my first marathon, to doing so in a pretty good time and of course picking up the win.

CR: What’s up next for you? More marathons I understand?
EB: I have two key races planned for spring which will include going after a fast half-marathon and then another attempt at the marathon but on a faster, flatter course. I want to bridge the gap between my 2:39 and the Olympic standard 2:29:50. Matt and I have a few races in discussion at the moment, but we haven’t locked down locations as of yet. Of course these plans rely on staying healthy.

CR: Do you have a favourite workout?
EB: I tend to enjoy the long runs with change of pace. Sometimes they include progression runs starting from a steady pace and finishing with either 5 to 10K efforts or sometimes they include more fartlek style with anywhere from one to four minute pick-ups mixed with regular long run pace between. I train pretty much 100 per cent alone so sometimes these long workouts are a mental challenge but I feel that helped me in the marathon where I ran pretty much solo between 20K and 36K.

EB: The night before I lay out everything and take the typical race uniform photo for social media. I try to get a decent sleep, but I usually wake up multiple times throughout the night. In the morning, I get up two to or two and a half hours before the start and I eat my breakfast, which is generally a bagel or toast or muffin. Then I relax for a bit and slowly get ready before heading down to the start line. Then it’s simply a warm up (a shorter one for the marathon) which is drills and a few strides.