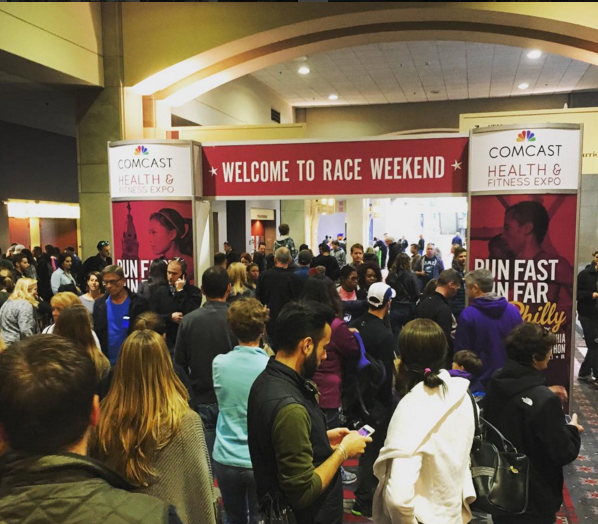 Sunday morning saw the 22nd annual running of the Gore-tex Philadelphia Marathon with a crowd of 12,800 runners gathering at the start line on the windy race day.

Going into the men’s race, Ethiopia’s Teklu Deneke, 36, was expecting to win. Though he says that conditions were very windy and colder than he had hoped, he was able to pull away from the pack crossing the finish line first with a 2:17:44. Second to him was Kenyan runner Abraham Rutto (2:18).

The women’s champion was Gisela Olalde Grandos of Mexico. The 31-year-old runner knows that she can perform better than Sunday’s 2:40:05 marathon however she just had her second child in March. U.S. runner Margaret Vido came in after her with a 2:44:40 time.

There were a lot of Canadian runners present in Philadelphia over the weekend. Since major races in Canada have already wrapped up, many are heading to the U.S. to finish their season.

Among them was Brittany Moran. Moran, who is from Etobicoke, Ont., was the first Canadian woman to cross the finish line Sunday morning. The runner was sixth in the women’s race. She clocked a 2:47:23– a new PB. 2015 has been a strong year for Moran– she was also the first Canadian female citizen to make it to the finish at Boston. There she ran 2:49:59. (See what Brittany brings to the races here.)

Ran far. Ran fast. Ran Philly!! Done and done @philly_marathon!! A windy day but a PB none the less, I will take it! #PB #runphilly

In the men’s marathon, Eric Bang of Toronto was the first Canadian. Bang ran 2:29:52 for a 15th place finish.

Trevor Hofbauer, a 23-year-old runner from Calgary also appeared in Philadelphia. Hofbauer entered into the half-marathon with two goals: to run 1:04 and to make the standard to run for Canada in the world half-marathon championships. Hofbauer did meet that standard. He ran 1:04:28 sticking with the lead pack for most of the race. He placed seventh overall.

Some dude called me a MF during my morning shakeout. Oh Philly, so welcoming

Canadian Running was also in Philadelphia on the weekend. Check out some of our best shots:

The scene from the expo of the #philadelphiamarathon this afternoon.

Rocky is pretty psyched about this year’s #philadelphiamarathon race shirt.