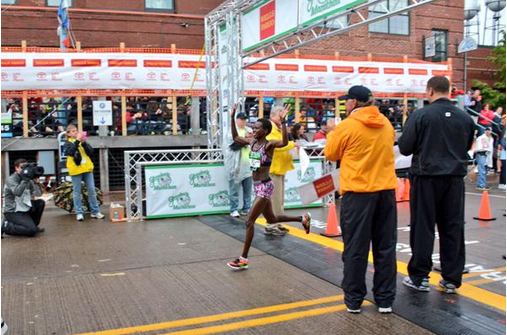 Grandma’s Marathon is a point-to-point course known for being a fast course that is mostly flat with a few gentle hills. It ran from Two Harbors along the shores of Lake Superior in mild weather yesterday morning.

Some fast times came out of this year’s Grandma’s Marathon though no course records were broken. Elisha Barno from Santa Fe came in first place running a 2:10:36. Behind him was Dominic Ondoro running a 2:11:17. Ondoro holds the course record of 2:09:06. In third place was Jordan Chipangama running the marathon in a time of 2:11:35.

As for the women’s race, Jane Kibii came first. She ran a 2:32:06 marathon yesterday. Lindset Scherf finished second (2:32:19) and Sarah Kiptoo came in third place with a 2:32:51. Each of the three women hold a spot in the top ten fastest women’s times ran on the course.

This popular event is also an old one. The first ever Grandma’s Marathon took place in 1977 when just 150 lined up at the start. It got it’s name because the first sponsors were a group of well-known grandma’s restaurants in Minnesota.