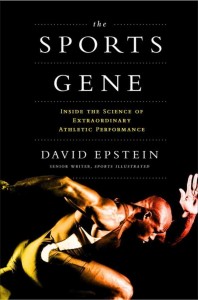 How long did it take you to research and write the book?

In ernest, I would say it started in the beginning of 2010 when I was working on a feature for Sports Illustrated. I’d had interest in those topics and being a runner myself and being interested. Specifically in terms of genetics, I would say the whole process — research and writing — took about three years. The first year I didn’t really type a word. All I did was interview scientists, read scientific journals, and do some of my own data analysis. So that was a year of just purely reporting. Then I wrote and continued reporting for the next two years.

What were some of the most interesting things you learned through researching the book?

I’d say one theme that was coming through in exercise genetics is a concept of trainability. We all know training groups that have five or ten people doing the same workouts and yet they never end up crossing the line at the same time. Sometimes they even end up getting more different from each other. I guess I knew it intuitively, but I never thought about the science behind it.

Now, science is moving towards finding that one talent for their biological setup that allows them to benefit the most from a specific hour of training compared to the next guy.

You were an 800m runner yourself in college and that’s an event that differs from others in the fact that there is a huge range of body types that often excel in it. Do you ever look back and think if you knew what you know now that you might have changed how you trained?

Yeah, I think I would have. At least, it may have saved me some time. For awhile after getting into running I thought “Oh, I have to do more mileage,” because that’s what people around me were doing. But I’ve always been more of an explosive guy, and had pretty good vertical jump and foot speed. So, it sort of took me two years of beating my head against the wall doing distance before I realized this isn’t me. I moved down to different types of training with higher intensity and lower mileage and I became a better cross-country runner on 35 miles a week than I had been on 90 miles a week. I think I could have saved myself some time just by understanding my biology being different from other people who were succeeding and that I might need different training.

The other thing I noticed was I did do a variety of physiological tests and I would say my physiology most closely matches short track speed skaters, so if I were going to go back and try that, that might be the perfect fit for me.

Has writing and researching the book changed how you watch sports?

Yeah, definitely. One of the things that got me curious about the book in first place was watching on TV Jennie Finch strikeout major league baseball players and calculating the transit time per pitch and saying “why can’t they hit that?” So, I started to learn about anticipatory skill which sort of allows elites to see the future. I see that now everywhere when I watch sports, how athletes are able to react to things faster than they should be able to.

Also, some people have asked if doing this research took away any of the enjoyment of sports. For me, it’s actually increased it because I view sports as the greatest stage to look at human biology, biological diversity and seeing people trying to find the perfect training environment for their unique biology.

When people read the book and started to write me letters about their own training I just loved that.

You cover what might be some taboo topics when you reach into race and genetics. Did you have much push-back from anyone about the book?

Honestly, I had more push-back before the book came out. I remember distinctly speaking about that topic with the head of a kinesiology department at a major research university in the U.S. He told me that he was doing a study about the response to a dietary supplement of exercisers and he had found differences between his black and white subjects and he told me that he would never publish it because he said, while there are biological differences, that could somehow be construed that there are intellectual differences. That was his fear. So he was advising me not to write about ethnic differences. I did get momentarily spooked by that. I thought “Oh man, what am I getting into? Am I getting into something I’m not ready for here?”

So I put the project on hold for about a month. The section of the book where I talk about what race does and doesn’t even mean from a genetic perspective, I went back over it and over it. I sent it to some moral experts and then I felt really confident so I went about and braced myself for the impact. The push-back has been almost nil. And I’m shocked by that. I hope that’s because people feel like I did a reasonable job and I took time in the book to discuss. I point out that when we ignore ethnic differences and ignore that background you can actually, in a medical context, put people in real danger. Maybe that helped people realize that these arguments are about finding the best outcomes for all people.

It shows through in the book. Who are some of your favourite athletes in the sport to watch these days?

Obviously I’m partial to 800m guys, so David Rudisha is must-see TV anytime he runs. I love watching Nick Symmonds run. I love that late-kicking style and I like his personality, which is good for the sports.

A guy who is obviously far from his peak is Haile Gebrselassie, and he might be my favourite athlete of all time, just because of the way he conducts himself and the records he’s had.

A guy I want to watch run is Dennis Kimetto, who is the winner of the Chicago Marathon. I mean, man, not only did he say he was a farmer as of 2010, but he said “Boy, if I’d have known I was that close to the world record I would have run a little harder.” I’m just excited to see if he can keep improving.

Do you still run or train often?

I do. Nothing like I used to, and I mix it up a bit and I do some cross training, but tomorrow night I’ll be at about a 200m hill near me I guarantee doing 10 by hill-sprint intervals on a cold night in New York. That’s how I do it now.

Now that is interesting actually; the research I did has definitely changed the way I approach the fitness training that I do now. One of the takeaways that I had was that explosive athletes are almost always training too much, so now instead of just putting on mileage, I do intervals. When I go out, I’ll do hard hill intervals and less mileage.

Did you anticipate the book would have so much success?

Absolutely not. If I had anticipated that I wouldn’t have made my mother buy ten copies, which I actually did. I feel like it’s okay to say that now because other people bought it.

I thought that because I don’t have a single answer for every athletic phenomenon, and I’m not telling people how to engineer their children that it wouldn’t really catch on, so I was completely blown away and pleasantly surpassed that it caught on the way it did.

Do you have any ideas for other works in the future?

The first thing I’m doing is writing an afterword for the paperback. It’s longer than a typical afterword, it’s almost a short chapter. It’s about specialization and hyper-specialization in youth sports.

The most common question I was getting from people after the book was “when should my kids specialize?” So the afterword is about that. That will be out in paperback in April.

Any final comments or things you think our readers might find interesting?

One thing I will say is that the things that got me into the project initially was my own experiences. I grew up in an area outside Chicago that had a lot of Jamaicans, and we had these great sprinters. We won 24 straight conference championships. I started to wonder what was going on on that tiny island. I moved up in distance a little bit in college and I met Kenyan athletes and learned that they were all from the same town. So then I was wondering what was going on over there. A real motivator was an interest to explore my own deepest questions that came out of running and athleticism.

One cool stat I keep track of now each year is how many Kalenjin runners, which is the tribe I write about in the book, break 2:10 in the marathon. Seventeen marathoners in the U.S. history have broken 2:10; 72 Kalenjin have done it this year so far. The Kalenjin tribe is about the size of Costa Rica. Can you imagine if 72 Costa Ricans ran under 2:10 in the marathon this year? It’s outrageous. This is the greatest concentration of sporting prowess in any sport in history. We should really appreciate what we’re seeing.