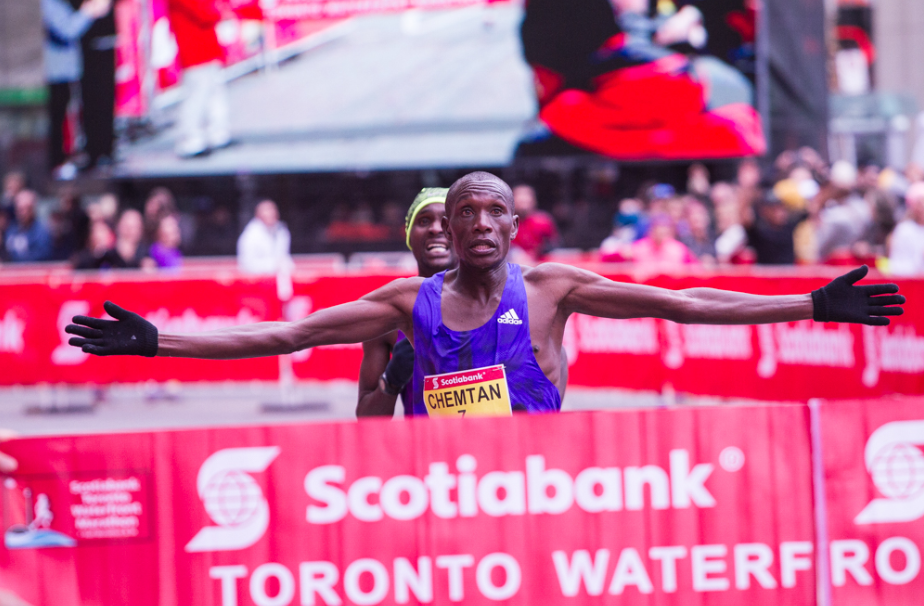 The champions of the 2015 Scotiabank Toronto Waterfront Marathon are Ishhimael Chemton (Kenya) and nineteen-year-old Shure Demise from Kenya.

The 26th annual Scotiabank Toronto Waterfront Marathon took place downtown Toronto Sunday morning with 26,000 runners ready to race at the start. Conditions were abnormally cold for this time of year with temperatures hovering near 3C at the start.

This year’s running of the Toronto marathon is the first one since the race earned its status as an IAAF Gold Label event– it’s the only Canadian marathon to have achieved this status. This year’s race also hosted the Canadian marathon championships with top Canadians also running to reach Olympic qualifying standards to send them to Rio (2:12:50 for men and 2:29:50 for women).

A deep field of international athletes showed up in Toronto this year. Among them was Kenyan runner and pre-race favourite Laban Korir. Korir returned to Toronto with a goal of defending his title. Peter Some, was also on the course. His 2:05:38 PB set in Paris two years ago made him the fastest runner prior to the race.

As for the women, Sharon Cherop, 2012 Boston champion and course record holder at the Scotiabank marathon (2:22:43) returned to Toronto. Her main competition going into the race was Shure Demise, 19 years old and from Ethiopia. Demise made her debut in the marathon early this year running a 2:20:59.

The men’s race today in Toronto came to a sprint finish between Ishhimael Chemton and Gilbert Kirwa. The top runners ran in a pack of seven strong staying with their pacers for most of the race. None of the athletes showed signs of making a move to pull away. At around the 30K mark, five runners ran up front dropping all but one of their pacers. It stayed that way until Gilbert Kirwa and Ishhimael Chemton managed to pull away dropping the rest of the pack after the 35K mark.

Soon after pulling away, Kirwa took a bad fall while turning a corner. The Kenyan stuck through though running up with Chemton. The two raced shoulder to shoulder up until the last 300m of the race when they began to kick. Chemton pulled away from Kirwa in the final moments of the race clocking a 2:08:58. Kirwa finished second in 2:09:00. Last year’s champion, Laban Korir placed third with his time of 2:09:20. 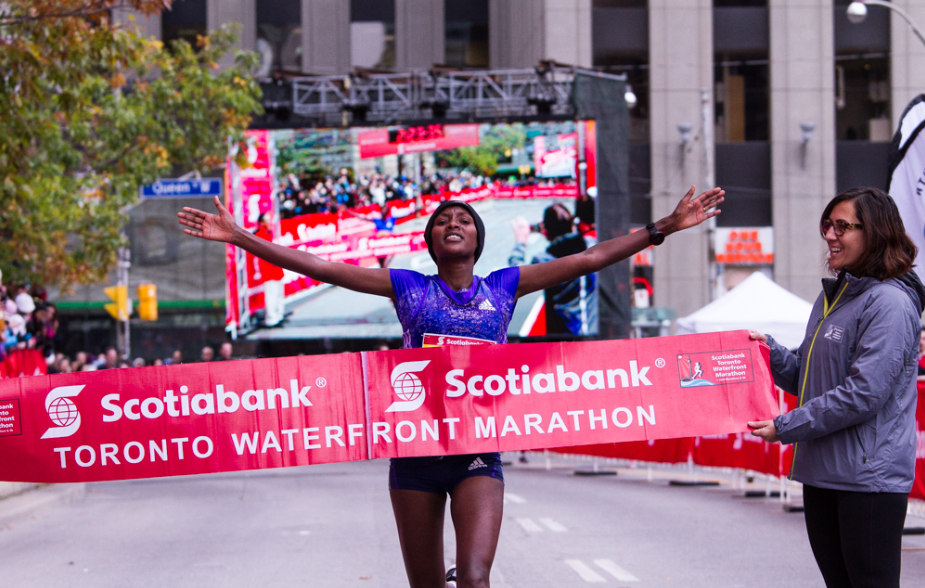 In the women’s race, 19-year-old Shure Demise ran strong up at the front of the pack. With her was Fatuma Sado also from Ethiopia and Sharon Cherop, the 2012 Boston Champion and course record holder.

Demise pulled away from the pack holding quite the lead over Sado and Cherop. She placed first crossing the line in 2:23:37– not a PB for the young runner, but a strong time nonetheless. Sado and Cherop battled it out in a sprint finish in the final metres of the race. It came down to 2:24:16 for both of them with Cherop falling right at the finish. 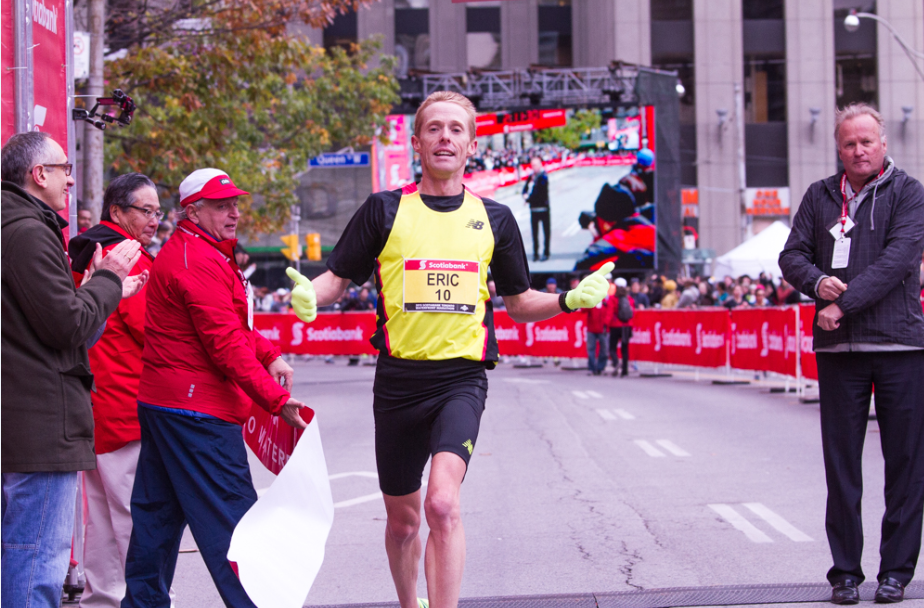 Eric Gillis had a good day in Toronto too. He gave an impressive performance finishing seventh in the men’s with a time of 2:11:31. That’s a qualifying time for Gillis meaning that Rio is going to be his third Olympics. His marathon PB is 2:11:21 and he is now the fourth Canadian distance runner to have made three Olympic teams. Second to him was Kip Kangogo. Kangogo represented Canada in the marathon this summer at the Pan Am Games but his 2:15:26 misses the qualifying standard. He came 11th overall. The third place Canadian was John Mason clocking a 2:22:35. 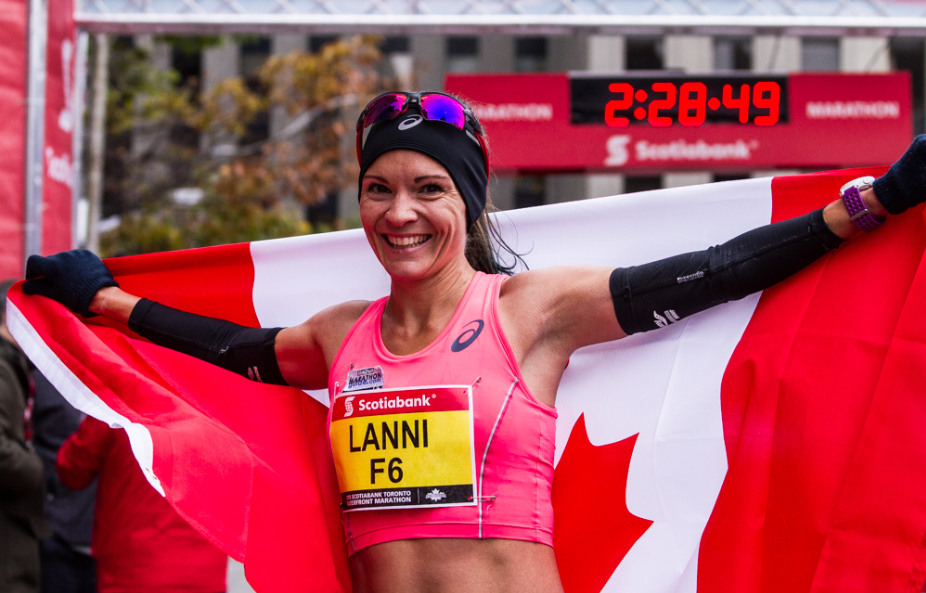 Lanni Marchant was the first Canadian woman to make it to the finish. She went into today’s race hoping to break her national record set in 2013 as well as qualify to go to Rio. She was on pace to break her record for much of the race. In the end, Marchant clocked a strong 2:28:09, just narrowly missing her record but earning herself another championship title. She’s also set to go to Rio. She came fifth overall in the women’s. Leslie Sexton was the second-place woman with her time of 2:33:23. It’s a strong run for Sexton but won’t get her to Rio. Natasha Labeaud placed third with her time of 2:37:11.

Other exciting Canadian news at the marathon today was Tarah Korir’s debut in the distance. The Ontario runner is the wife of 2012 Boston champion Wesley Korir and does most of her training in Kenya where she lives. Korir ran 2:49:57 landing her in 15th in the women’s.

For full results of men’s and women’s races, see here.