Lanni Marchant and Reid Coolsaet performed incredibly well in Vancouver today on the downhill course that takes runners on an ocean side tour to Stanley Park. 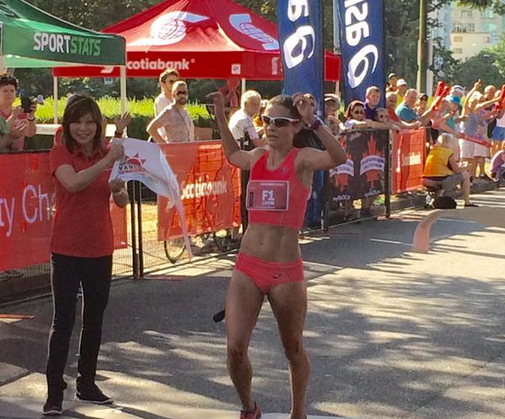 Today Lanni Marchant and Reid Coolsaet are celebrating their wins at the Scotiabank Vancouver Half-Marathon. Both raced incredibly strong at the popular Canadian Running Series point-to-point course this morning.

Coolsaet led for much of the men’s race with his main competition being Matt Loiselle for a chunk of the half-marathon today. Coolsaet and Loiselle were neck in neck up until the 6K point of today’s race. Then, Coolsaet started to open a gap pulling away from Loiselle at the seventh kilometre.

At the 11K point, Coolsaet had a comfortable lead. He finished with a time of 1:05:40. Arya Bahreini came in behind him running a 1:06:34. That was a 24-second lead over Loiselle who finished third.

21:34 at 7k #scotiahalf and @ReidCoolsaet pushing, opening small gap on Matt Loiselle. Will this be over early? pic.twitter.com/CZBgwSHG3n

It’s 39:56 at 13k and @ReidCoolsaet 50m clear of Mart Loiselle, extending lead on hill up to West 4th pic.twitter.com/ZQH3X81tGA

As usual, Lanni Marchant and Natasha Wodak were competing for the win today in Vancouver. The two women have been having a back-and-forth battle all season with a 2:2 score. Marchant came to defend her title on the course. The two stayed together for much of the race. At 8K, they were beside each other. By the 13K point, Wodak was slightly ahead of Marchant but Marchant managed to pull away to finish with a time of 1:11:08. Wodak came in second at 1:12:30.

At 13km @tasha_wodak & @LJM5252 still side by side – Tash putting in a bit of a surge #scotiahalf pic.twitter.com/MoZbVTovjl

Lioudmila Kortchaguina was the top masters woman. She placed third with a time of 1:17:32. catherine Watkins, who has also been having an incredible season full of wins and PBs came in after her running the half in 1:19:04.

The race’s charity is VOKRA a Vancouver volunteer-run charity that places kittens and cats in safe homes for adoption. Wodak showed her support by painting a set of whiskers on her face.