What’s the coldest weather you’ve ever ran in?

Last weekend in Churchill, Man., was the second year for the Polar Bear marathon. The wind chill was -41 C and the course ran along the coast of Hudson Bay where winds gust up to 40K per hour.

The idea for the Nov. 22 event came about in February of 2011 when Albert Martens, the race director, crossed the 40,076K mark in his running log, or the equivalent of once around the world. That day it was -32 C and he got the itch to run a marathon somewhere even colder. 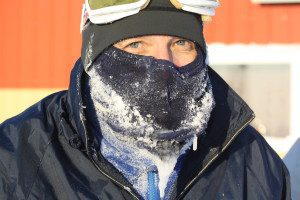 Martens, a resident of Steinbach, a town southeast of Winnipeg, needed somewhere further north to hold the race. Churchill was selected because it’s still in Manitoba. The town, which is over 1,000K north of Marten’s home, is a base for Arctic and sub-Arctic research.

“It’s more of a challenge to test your body and mind against the brutal natural elements outside,” said Martens in an email about the runners who show up for the event. “Some runners are always looking for new tough challenges.”

The event has lived up to its name, although the runners are never actually expected to encounter polar bears while running. Last year runners did see one before the race started, but any that might cross the path of runners are scared off by roving trucks which protect the athletes.

“We assign two runners with similar pace running times to an escort vehicle that will closely follow the runners.  Runners are instructed to stay together and near this numbered vehicle”

The trucks also serve as mobile aid stations that carry food and clothing and are equipped with rifles in case of emergency. The route also has RCMP and ambulance services available.

Martens does claim that polar bears are often less of a safety concern than the wind and cold, which have caused more problems than the bears.

“It’s the polar bear capital of the world, where hundreds of bears migrate to the Hudson Bay each year. Our plans are not to run with bears. Often just after the tourist season, around Nov. 20, most bears will be gone. Depending on the weather, especially when the Hudson Bay is frozen, they prefer seals to skinny runners. After all, they are fat eaters, called lipovores, not carnivores.” said Martens.

Next year the event may introduce new distances, including a possible 50K ultramarathon or 21.1K half, but what really draws many of the runners to Churchill is the scenery along the shore of Hudson Bay, and possibly a glimpse of the northern lights.