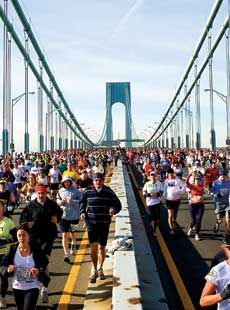 On Sunday, the largest marathon in the world will see it’s millionth finisher cross the line. The 44-year-old New York City Marathon has been run every year except 2012 since 1970.

Last year the race celebrated it’s millionth runner start the race, though not everyone who crosses the startline makes it to the finish, and this year the event will see the number of finishers roll over to seven digits. They’re expected to step across the Central Park finish between 4:00 and 4:10.

Whoever crosses the line as the millionth finisher will be awarded guaranteed entry to the event for life and a $500 shopping spree the next day for “Marathon Monday.”

Asked about the idea that the race would ever reach the popularity it has, NYRR chairman George Hirsch said it was never even considered. “I couldn’t have even thought of the question,” he told Bloomberg during a press conference. “When we had 2,000 people — 88 were women — crossing the Verrazano Bridge in year one, we thought we had won the lottery.”

One Canadian race celebrated a similar milestone earlier this year when the Vancouver Sun Run, which regularly sees 40,000 entrants, registered their millionth runner in April of this year.