This story originally appeared on our site ahead of the 2015 Pan Am Games. 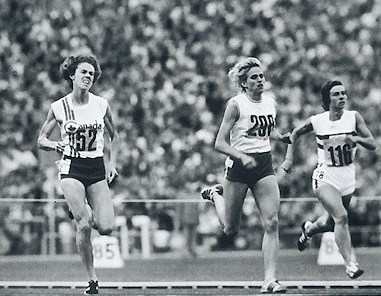 It was 1956 when nine-year-old Abigail Hoffman cut off her hair, shortened her first name to “Ab” and signed up to play with the boys at their junior hockey league in Toronto. As a member of a family of hockey fans, she had grown up exposed to the sport, had been skating since age three and had learned to shoot with a hockey stick at age five. She wanted to be on a team but a girl’s team was non-existent. So she pretended to be a boy instead.

It went well for her. Her talent was undeniable so much so that she made the all star team. The problem: Abigail Hoffman would have to present her birth certificate and be outed as a girl. Sign up time came and sure enough, the truth came out kicking up a big fuss. “I think it’s a lot of nonsense,” said Hoffman at the time when asked about her feelings towards others’ reactions (see 1956 interview below).

Hoffman’s coaches were supportive allowing her to play out the season but by the end of it, she was informed that the league put a new rule in place: no girls allowed. There was talk of including a girl’s team. That didn’t happen. In a CBC interview in 1956, the young athlete explained her understanding of the decision. “Some of the men in the THL didn’t want it, they thought it would cost too much to rent the ice.” Hoffman’s mother stood by her. “We felt that especially at this age, it’s just as appropriate for a girl as a boy,” said her mother about her decision to let her daughter play hockey.

Hoffman takes to the track

Hoffman was kicked out of the league as a child but took to the track to stay in sports. Her career was a long one and her talent for running middle distance showed through. By the age of 15, Hoffman was already competing at the international level running the Commonwealth Games in Perth, Australia. She ran the 880 yard race. It was 1962.

Her accomplishments in sport just took off from there. She represented Canada at the Pan Am Games five times winning a medal in each event. She won gold for Canada in 1963 at age 16 when she competed in the 800m in Sao Paulo, Brazil. In 1967, she won bronze in the 800m when Winnipeg hosted the Games. In 1971 she showed up to the Pan Am Games in Colombia and took home gold in the 800m. 1975 was a big Pan Am year for her. Hoffman went to Mexico City, raced the 800m and 1,500m and brought home silver and bronze.

The Pan Ams Games weren’t her only highlights. Hoffman is a former Olympic athlete having made the Olympic team in 1964 and running in Toyko. She made the finals in 1968 when the Olympics were held in Mexico and again in 1972 when Germany played host. 1976 was the year athletes came to Montreal to battle it out. Hoffman ran the 800m again and was a flag-bearer that year. Her career includes running at the FISU World University Games four times and representing the country at the Commonwealth Games twice.

It’s an impressive resume both for athletes at the time as well as for runners who commit to intensive training regimes now. To be a top athlete of this caliber takes strength, dedication, patience and perhaps most notable for a case like Hoffman’s, a thick skin. 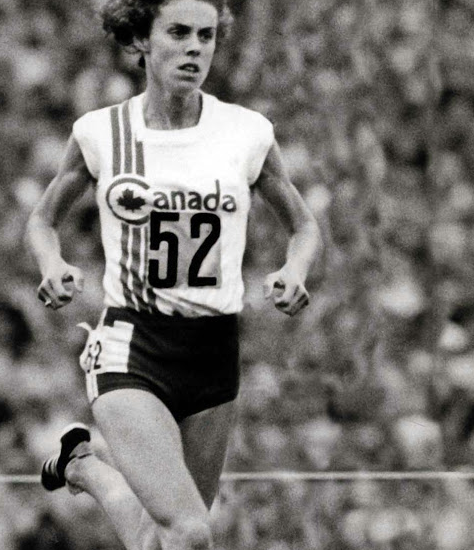 That she had. And it’s Hoffman’s ability to shake off negative attitudes and persevere in her sport during a time when many rejected the idea of women in athletics that makes Hoffman’s story so important to Canadian athletics.

Hoffman experienced sexism in sport for the early age of nine and getting kicked out of the hockey league wasn’t the end of it. While there was a place for women in high level competitions on the track, she dealt with naysayers who claimed that women were too fragile to run or that they were too weak. Many saw the distances that Hoffman and other female athletes ran as simply being too much. But Hoffman rejected all of it.

“People don’t think running 15 miles a week is a good idea for girls? Guess what? I’m going to run 60,” says Hoffman in Play Fair, a new Canadian documentary about women and sport in Canada directed by Donna Gall.

In 1966, Hoffman went to use the indoor track at The University of Toronto at Hart House, which was then, an all-male facility. She was kicked out. This happened despite the fact that by 1966, Hoffman had already represented Canada as an Olympic, Pan Am and Commonwealth Games athlete. She was also a student who had, ironically, chosen to attend the school thanks to the progressive thinking she associated with the school.

She comments on this situation just two years ago at the 2015 University of Toronto convocation where she received an honorary degree. “I thought it was particularly outlandish as this wonderful building with its provisions was located just a few feet from this epicentre of liberal thinking university college,” she says.

Female athletes who go to the Hart House now enter through the doors to see a quote by Hoffman on a plaque. It reads “Only she who attempts the absurd will achieve the impossible.”

“This is a statement about change, about challenging norms which seem natural, acceptable, at least defensible to some but which to others, seem absurd if not downright ridiculous,” she said in her speech at the convocation. “In my case, absurd fit because the restriction I challenged was the very simple idea that a class of people could be prevented from doing something very ordinary. To be specific, running counter-clockwise around an indoor oval entirely because of their gender.”

The track star’s contributions to Canadian athletics and specifically for fairness in female participation in Canadian sport are endless. During the 1960s and 1970s, she was one of the most influential female athletes in the country and she used her experiences to further the conversation of making athletics fair for women. She became the first woman director general of Sport Canada on the Canadian Olympic Association, a role which she filled for ten years. She wrote about fitness for Chatelaine for two years and worked for Health Canada as the director of the Women’s Health Bureau.

She continued in these roles often bringing up the issue of athletes not being properly represented on the committees which hold decision-making power. Her work in sport was so reputable that she was granted the Order of Canada in 1982 and was one of the first women to be elected to the IAAF council in 1985. She is represented in Canada’s Sport Hall of Fame.

It’s been over 50 years since Hoffman won her first gold at the Pan Am Games and 51 years since she was kicked off the track during her workout. Several women athletes have come after her seeking out the thrill of competing on the track.