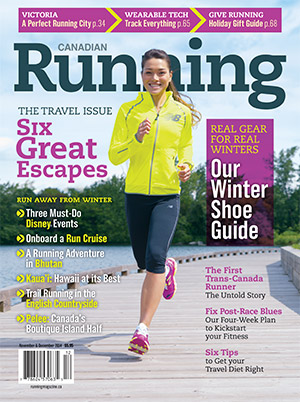 With contributions from Christiane and Stephan Kappes, Karla Bruning and Kerry Hale
Canadian runners dread when winter approaches. We have your anecdote: four incredible destinations that will satisfy every type of runner. We breakdown the best Disney events (p. TK), explore what it’s like to take a running-themed cruise (p. TK), follow a multi-day stage race in the Himalayan hermit kingdom of Bhutan (p. TK) and run what may be the most breathtaking race that Hawaii has to offer (p. TK). It’s time for a running escape.

By David Carroll
In the spring of 1971, a 17-year-old running-obsessed kid from Toronto decided he wanted to do something different – something no one had ever done before – during his summer vacation. So he went to Victoria and started running east. This is the never-before-told story of the first person to ever run across Canada.