From record setters to incredible age-groupers to those that make it all possible, Canada’s running community has several outstanding individuals. We honour seven deserving runners who have made a huge impact on our sport in the past year. We chose J.P. Bedard as runner of the year.

At 10:30 p.m. on Oct. 15, the eve of the 2015 Scotiabank Toronto Waterfront Marathon (STWM), Jean-Paul Bedard readied himself at the corner of Dundas Street and University Avenue, the marathon’s starting line. The temperature dipped below -5 C, and he strode off into the darkness.

“I felt an incredible knot in my gut,” he said. “I think it was all the pent-up emotions finally finding release.”

Bedard, 49, set out to run the stwm course three times consecutively for the purpose of raising awareness and creating dialogue about sexual abuse. A victim of sexual abuse himself, this is a cause that’s close to Bedard’s heart; helping others – and himself – triumph over trauma has become his life’s mission. 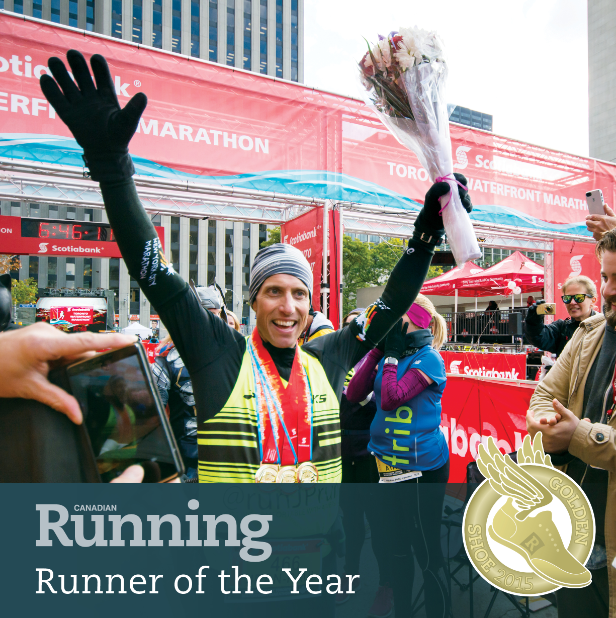 “We all go through adversity, and it’s not something to be afraid of. We have huge inner strength and resiliency that we rarely tap into, but when you need it, it’s there,” he said. “Trauma has, in some weird way, been a gift because it’s allowed me to access this and give it to other aspects of to life. In long-distance running, you need that, too. I’ve gone through way worse than running 126 kilometres.”

Bedard was born on June 1, 1966, in Toronto. The youngest of five, his childhood was marked by unhealthy parental relationships, divorce and physical abuse by his alcoholic mother. He played on several school sports teams, and when he was nine, his hockey coach sexually abused him. Bedard reported the incident to his father, who quickly followed up with the school board, but the young man had already skipped town. No one pursued the matter. “That set a precedent in my mind that an issue can get addressed, but not dealt with,” Bedard said. 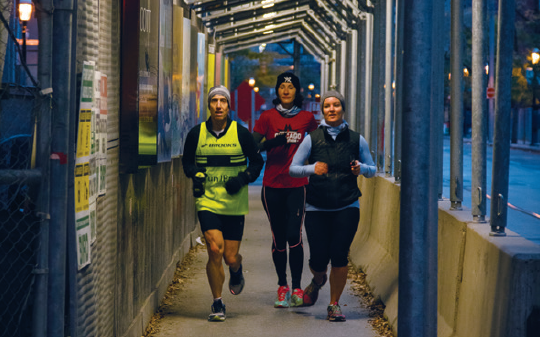 Then, when Bedard was 12, he was violently raped by two young men in a ravine. “That was a pivotal moment, but I didn’t realize it at the time,” he said. “I didn’t tell anyone.”

Regardless of gender, the negative effects on the survivors of sexual abuse are well documented, although men are less likely to report assaults and seek assistance. They feel stigma, shame, fear, and often question their sexuality, especially if their perpetrators were also male. Many men may try to find help, but they quickly discover that sexual assault and rape crisis centres may only provide services to women, or if they can access services, there are none specifically designed for men. Only three organizations in the country are dedicated to providing services to male survivors.

Bedard certainly fits the textbook childhood sexual assault profile. “After the incident, my life derailed quickly,” he said. “By Grade 8, I was drinking daily, and then I got kicked out of high school. At that point, I was playing hockey and football, but dropped out because I associated it with trauma. I was quite depressed and suicidal.”

The one bright spot in his life was his marriage. They have been together for 29 years and married for 28. “I couldn’t keep going with the addiction stuff. It was a low point and I was quite depressed and suicidal. It was just a bad, bad scene.” Bedard has been clean and sober for almost 19 years. “Things got better right away,” Bedard said. “I had been numbing myself for years. I never really made the connection between why I was drinking and what was the cause.”

Bedard had reached a point about three years ago where he simply couldn’t keep the secret about the sexual violence in his past hidden anymore. “ I couldn’t keep feeling burdened under the weight of all that energy required to bury, ignore, numb and anesthetize it,” he now realizes. 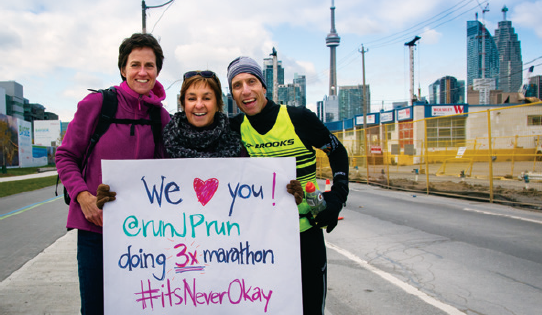 For the first time in his 15 years of sobriety, he was closer than ever to picking up a drink or a drug. “I’m not exactly sure what happened, but there was definitely a shift in my running,” he says. For years he had used his running like every other drug. “It was something to escape into, a way of shutting down my mind for a while, but now, I was making a conscious effort to literally run towards what scared me most.”

He spent weeks trying to figure out how to tell his wife about the sexual abuse in his past. “Once I got to a place where I felt I could initiate that dialogue with Mary-Anne, I sat her down and told her what happened.” But Bedard said that full disclosure was a long process and was not one coherent event. It took them multiple difficult conversations, unfolding slowly over the course of nearly a year.

“I initially only had the courage to tell her about the childhood sexual abuse with my hockey coach when I was nine,” he said. “It wasn’t until much later that I was able to share some details about the violent rape that took place in a ravine when I was 12 years old.”

And here is where running really helped Bedard. “I went through a period of about six months where I would cry on most runs,” he said. “It was as if, once I had given myself permission to access those memories of the rape, more and more details began to trickle out during my runs.” But it wasn’t until each night that those memories had the most resonance. “I was plagued by chronic night terrors, and my wife was waking me up three or four times a night,” he said of that period. Bedard spent most nights in a cold sweat, shaking.

Three years later, he’s still under treatment for post-traumatic stress disorder and night terrors. “The memories of the rape are playing out like a film, and every now and then, that film plays a little longer, and more and more details filters down to me,” he said of this process, which is still unfolding. “Often, when I go to that place in my memory while out on a long run, I can smell the acrid sweat of one of the men who was holding me down on the ground,” he said. Running, by contrast, has given him a safe place to process these memories in that he’s able to sit with them for as long as he’s able to tolerate them. “If the memories become too overwhelming, then I just up the tempo on my run, and that seems to be enough to shut down my brain a bit and reconnect me with the here and now.”

Premier Wynne, an avid runner, jumped at the chance to get involved and support Bedard at the Scotiabank Toronto Waterfront Marathon. She ran alongside him during the first 5k leg of his third lap around the course, the start of the official marathon. During the run, Bedard and Wynne both wore the hashtag #ItsNeverOkay on their jerseys. They talked about how they could work together to stop sexual violence, support survivors and create safer environments.

“I was honoured to join Jean-Paul on his run,” said Wynne. “I admire his dedication and bravery in opening up about the sexual abuse he endured, and, as a male survivor, starting a dialogue about
these important issues.”

“My wife inscribed one of our anniversary cards: Who knew at the time that when we said, ‘For better or for worse,’ that it would be our worst that would make us better,” Bedard said. “That’s what my run was all about – what I thought was the worst in me is actually the best. That’s why we sign up for long races, and that’s the beauty of our sport – it brings out the best in us.”