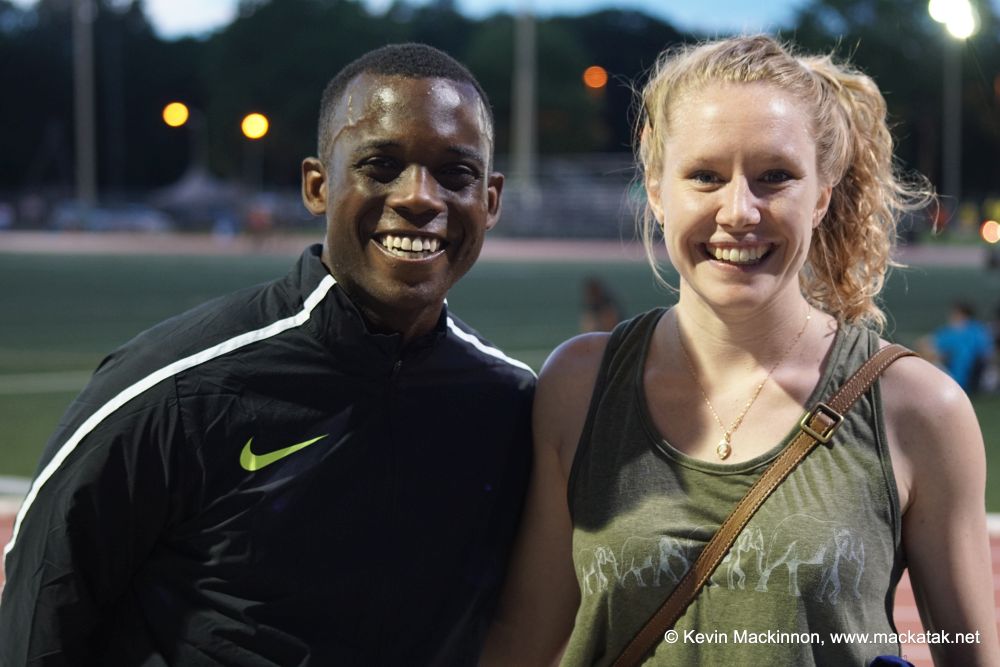 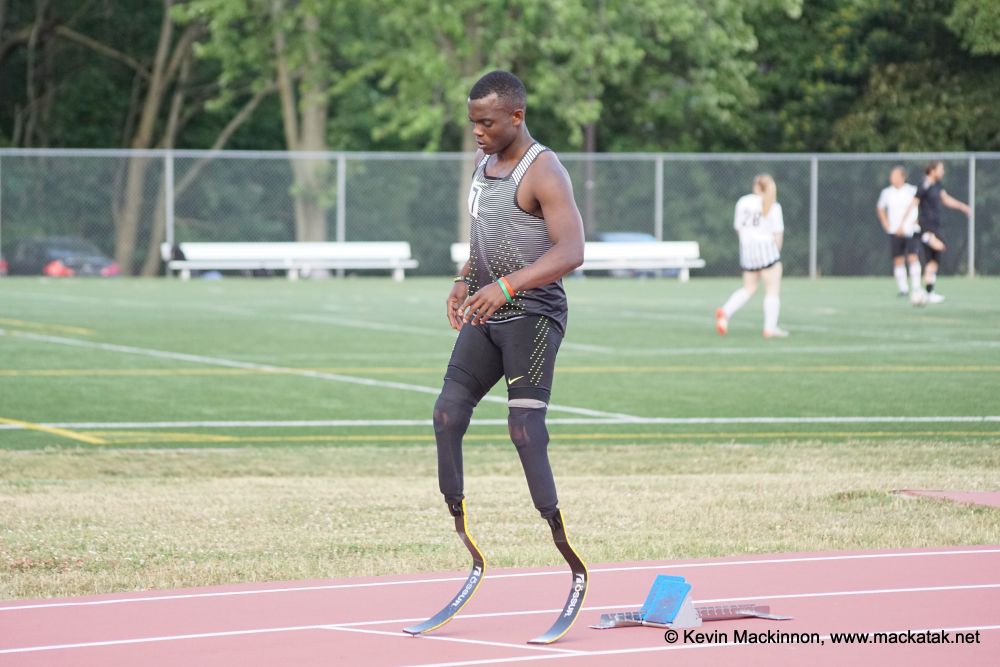 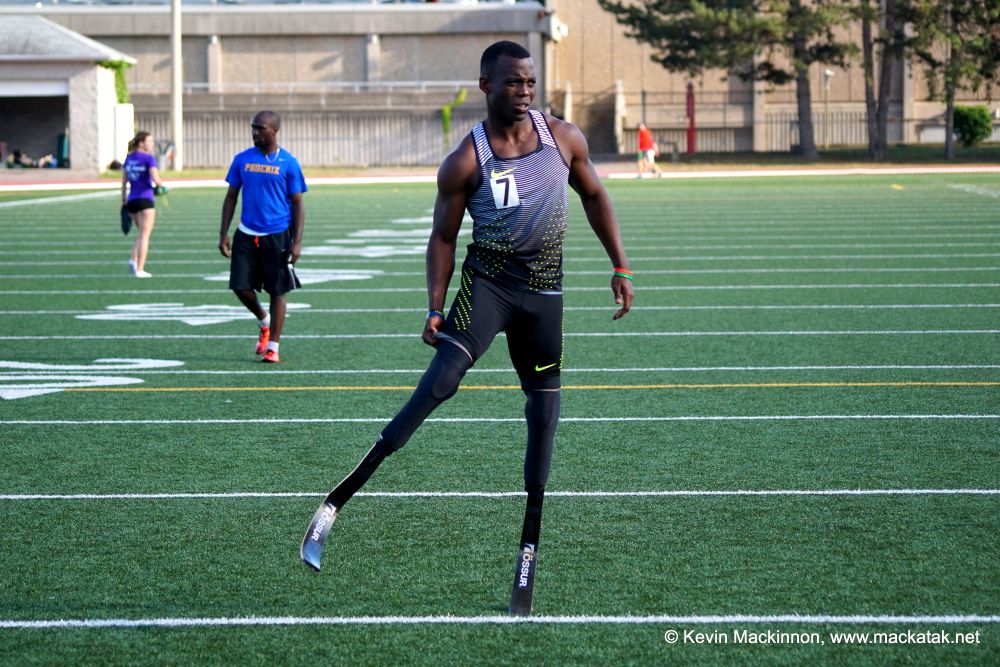 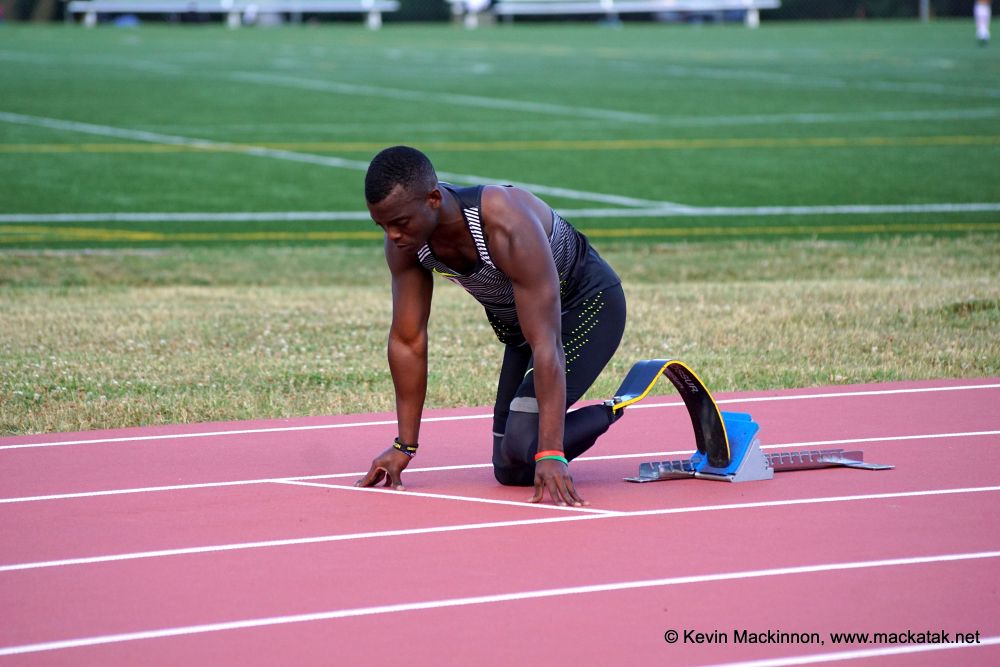 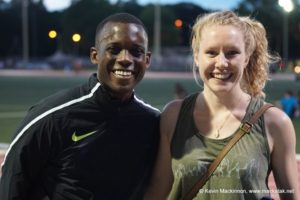 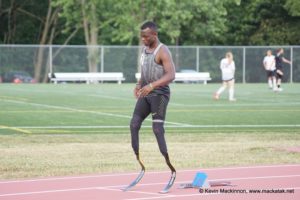 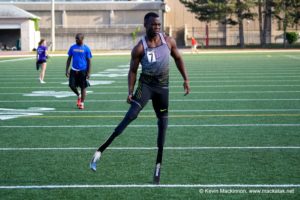 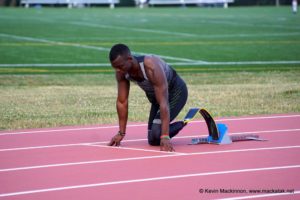 The pressure is on. Patrick Blake Leeper, the 400m silver medalist from the 2012 Paralympic Games, is trying to qualify for the U.S. Olympic trials. To do that he has to run 45.4 by Sunday.

Leeper, a double amputee sprinter, was in Hamilton, Ont. last night trying to achieve that goal. But here’s the thing: it was also his first race back after serving a one-year suspension for a positive drug test after last year’s U.S. Paralympic national championships. Out partying the week before that race, Leeper got drunk and had some cocaine. A few weeks later his life took and complete turn when he received news that he had a positive test.

“The pressure is on,” the 26-year-old said just minutes after his race yesterday where he ran a new American record of 46.54, the second fastest time ever for an athlete running with two artificial legs. Only world record holder Oscar Pistorius has ever gone faster (45.39). In fact, Leeper was hoping to better that time when he stepped out onto the track at his race. “I do like the pressure. I came here and hoped to break the record, but in the bigger picture, I’m happy. I’m back running again. I get to inspire some people.”

Rising to the top

Leeper’s story is one of inspiration. Born with a congenital birth defect, he was fitted with his first pair of prosthetic legs at just nine months. In 2009 he wrote to the Challenged Athletes Foundation asking for a grant for some running legs. They came through and within two years, he had set a new American record for the 100m and qualified for the Paralympic Games in London, where he took silver in the 400m and bronze in the 200m.

He returned from London to a life of celebrity and started to hang out with “not good people,” according to his coach, former world championship medalist and Super Bowl champion, Willie Gault. Alcohol became a regular fixture in his day-to-day existence.

“Power, prestige and pleasure were the three things that ruled my life,” Leeper says of that time period. “Having that power, thinking I’m better than everybody else. The prestige of being on the world stage and thinking I’m above everybody else – I’m on TV, look at me. And pleasure, thinking I deserved a lot of things. I wanted to please myself. The trials and tribulations that I went through made me desperate and humble, and having a sense of gratitude and a little bit of humility is what a true champion is all about. I’ve learned that this past year.”

Serving a ban from competition

Leeper was lucky to have some of the right people arrive in his life. Bob Babbitt, one of the co-founders of the Challenged Athletes Foundation, was one of the first to call after news of the suspension. Bob Lorsch, an LA entrepreneur and millionaire, had met Leeper at a fundraising dinner and remembered the inspirational young man. Then there was Willie Gault.

“That year was hard,” Leeper says of his year out of competition. “At one point I thought my career was over. I had to take the first three or four months and get my life back on track. After I did that I had to ask myself ‘Do I want this, and how bad to I want it? Am I willing to go to any lengths to get back?’ Once I made that decision, some amazing things happened in my life. Willie Gault came into my life, Rob Lorsch came into my life. They said ‘If you want this, we want it just as bad as you do, let’s go and get it.’”

Now his life is filled with “appointments I promised people I would make every day to keep my life on track,” along with hours of training on the track and in the weight room.

Heading back to the track

The suspension ended at midnight Tuesday morning. Leeper and his team reached out to McMaster track coach Paula Schnurr, a two-time Olympian herself.

“McMaster University and the Hamilton community really supported me,” Leeper says. “They came out and cheered me like I was one of theirs. Coach Schnurr, she’s an angel. She and her husband took care of me.”

First up on race day was the 200m. Leeper came out of the blocks much slower than his competition, but by the 100m point, he was flying past the rest of the field. His time of 21.49 broke the old American record by over a quarter of a second – an eternity in the world of sprinting. In the 400m, Leeper couldn’t hold his form and had to “settle” with that 46.54, another American record (the old standard was 48.3).

“Technically he didn’t execute the way he should have, but it’s understandable because it’s his first race in over a year,” Gault said after the race. “He broke two American records, so I can’t be too disappointed with that. The goal is for him to run efficiently, which he didn’t do tonight. He got a little bit excited and dropped his form and technique. It’ll all come with races. I think it’s a really good start.”

RELATED: Behind the scenes of Emily Setlack’s killer comeback

“It’s been rewarding on both sides,” Gault said of working with Leeper. “He’s been an inspiration to a lot of people we work out with at UCLA. Able bodied Olympians and guys who are going for the Olympic team and gold medalists – they all look at him and he encourages them.”

Leeper has two more chances to try and meet the U.S. Olympic trials standard before Sunday – he’ll run again tonight at a meet in San Diego. Whether he achieves that standard or not, he’ll head to Rio as a favourite at the Paralympics later this summer. But, most importantly, he’s back with a new perspective on life and sport.

“This is fun. The partying and being out and being seen, that’s not fun to me anymore. This, right here, running and being able to compete, kids coming up to me and asking about my legs, that’s fun for me.”