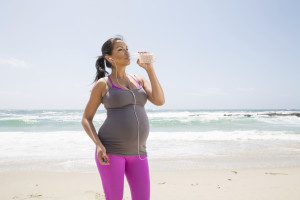 More studies are coming out in support of running through pregnancy, but questions remain about how intensely expectant mothers should exercise with a baby on board.

In the low-intensity range, a Texas study published last year in Medicine & Science in Sports & Exercise showed that non-exercisers who started up a “minimum requirement” workout program during their pregnancies had a lower rate of C-section deliveries and returned to normal activities faster than the non-exercising group. However, the birth weight of their babies was not affected.

By contrast, a study published this year in the British Journal of Sports Medicine concluded that women who followed a moderate-intensity exercise program three times a week in the second and third trimesters of their pregnancies were less likely to have a high birth weight baby.

Two other recent studies on intense exercise among pregnant women raised some concerns that maximal efforts may temporarily lower fetal heart rate and umbilical blow flow. But in both of those studies, the abnormal values returned quickly to normal and the babies were delivered without complications. So at this time, there’s no evidence that very intense exercise will do any harm to the baby.