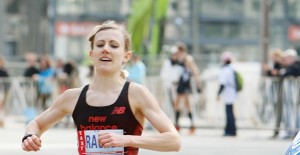 The two winners of the Boston Athletic Association’s Mayor’s Cup cross-country championship were both from outside the United States, the women’s champion being Toronto’s Rachel Hannah.

Hannah won the race through Boston’s Franklin Park, beating a strong field of elites that included last year’s NCAA champion Abbey D’Agostino who was making her professional debut. She finished the 5K cross-country run in 16:37, using the race to prepare for more upcoming cross-country events at home in Canada. It was her first time racing the Franklin Park event.

“It’s quite an honor to win here,” said Hannah after the race. “I’ve heard about this race and have been running for a long time, and wanted to come find a competitive race to start off my cross-country season.”

The men’s 8K winner was Mitch Goose of the U.K. who lives in New York City.