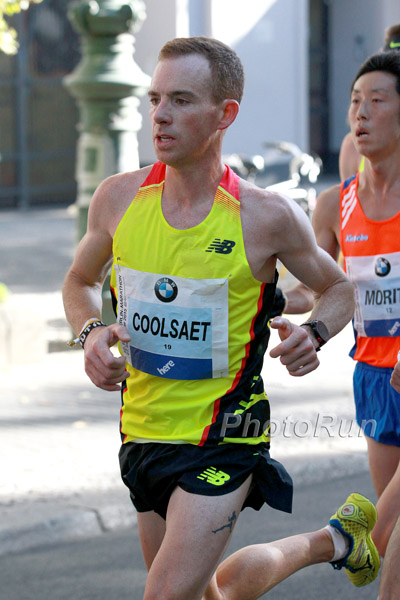 Over the weekend, Reid Coolsaet raced the Berlin Marathon placing sixth and running the second-fastest Canadian marathon. The Hamilton runner was looking to set the record, and came very close with his time of 2:10:28. Coolsaet is in Berlin exploring the city over the next few days. We caught up with him to talk about his race and what’s coming next.

Canadian Running: Talk to us about the marathon. What do you like about the Berlin Marathon?

RC: Berlin is the fastest course I’ve run and the crowds are great. Having a solid pack through 25K was amazing and even when I took off alone it was exciting to chase the Canadian record.

CR: What were your hopes going in?

RC: I had three goals: to break 2:10, to break the Canadian record and to run a PB. I achieved one of three, so I’m happy.

CR: You got close to the Canadian record. How does it feel and do you think the record could be in your future?

RC: I’m happy with being the second-fastest Canadian. I’ve been in this position before. I still believe I’m able to run under 2:10, I just don’t know when I’ll have another shot. Who knows what the record will be the next time I shoot for it?

CR: How did you celebrate yesterday’s race?

RC: After the race I got some currywurst, fries and crepes. Later that night, I celebrated with the other athletes at the Berlin marathon after party.

CR: You mentioned feeling in trouble between 5K and 10K. Talk to us about that. How do you stay mentally tough even when worried in a race?

RC: 5K to 10K felt fast and I was worried I couldn’t maintain that pace. That segment was run in 15:12 so I didn’t have to maintain that pace anyways. In a marathon you can have good patches and bad patches. I try to stay positive that things will get better if I’m struggling.

CR: Tell us about Rio and what’s in store for you going forward now.

RC: Rio will be the main focus of 2016. I’m looking forward to getting back to the Olympics and improving on my showing from 2012. The next little bit I’ll be recovering and then getting in a solid base for 2016.