The Prairie Inn Harriers hosted the Pioneer 8K in Saanichton, B.C. on Sunday with Rob Watson (23:47) and Natasha Wodak (26:31) besting their respective divisions.

The race was Watson’s third consecutive win dating back to the Fall Classic in Vancouver and, more recently, the Boxing Day 10-Miler in Hamilton, Ont.

Beautiful day for a foot race. That went well, very happy with the effort. https://t.co/sDxm9cORfF

Wodak entered Sunday coming off a victory at the 2015 Canadian Cross-Country Championships, a title she won for the second time at the end of November in Kingston, Ont.

The race was run under partly cloudy skies on Sunday morning (the race began at 11 a.m. local time) with temperatures around 7 C. 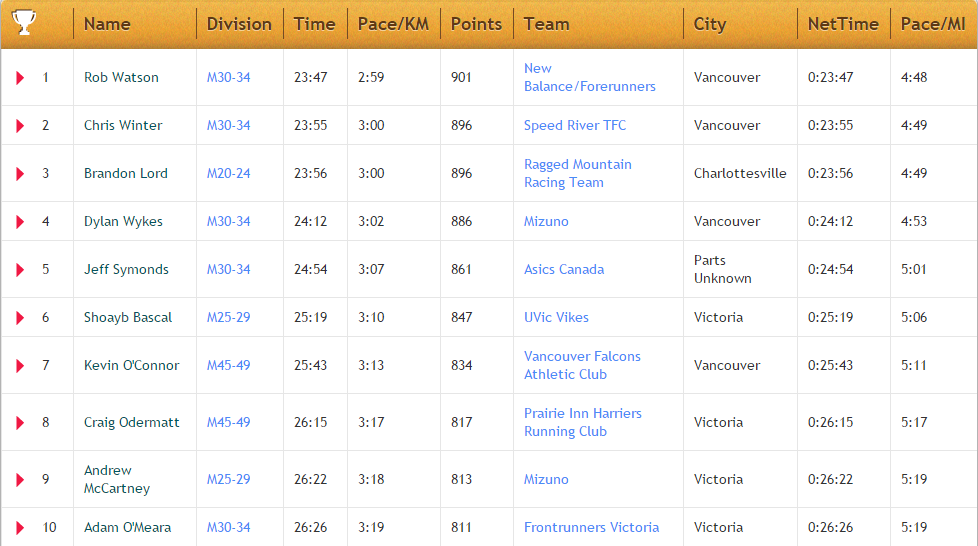 Olympian and Canada’s third fastest marathoner of all-time Dylan Wykes finished in fourth running 24:12 following a heavy week of training — Wykes put in more than 51 kilometres of combined work this past Thursday and Friday.

Jeff Symonds, one of Canada’s top triathletes and a contributor to Triathlon Magazine Canada, rounded out the top-five finishing fifth in 24:54.

Wodak’s ridiculous course record of 25:28 set in 2013 lives another year as the Vancouver resident cruised to victory with a 35-second-plus margin over Rachel Cliff.

Lord and Watson were presumably using Sunday’s race as a final tune-up before the Houston Half-Marathon next weekend.

The Canadian standard for the World Half-Marathon Championships is 1:06:00 but a top-three ranking (see current rankings here) is needed in order to qualify for the spring championships in Cardiff, Wales.

Sunday’s race was the opening race of the BC Super Series, an initiative between BC Athletics and local road races, new for 2016.