Oh where, oh where should we begin this next update? Just kidding, I know exactly where to begin: how about that Brianne Theisen-Eaton! What a beauty of a performance!

When we first got to Moscow there was a bit of worry, as apparently Brianne was kinda sick. She was quarantined in her room and was scarcely seen… Then the competition started, and well, we all know how that turned out! What an absolute beast. Way to go Brianne, making all of Canada proud!

The Canadians did work in those multi events here in Moscow! The vibe in the Canada camp is very positive right now. We have two medals and everyone is competing like animals. I’m really digging all this positive energy. This is a very special group of people we have here. I am proud as balls to be associated with this team.

It is always a very special experience to get to represent Canada on the world stage. We have an amazing country, folks. Every time I am travelling abroad, people see the maple leaf and smile. We have such a great global reputation. Yesterday, I was running in my Canada shirt and I had two serious, stern looking Russians smile and cheer as I went by. One said, “go Canada!” and the other said, “Wayne Gretzky.” I laughed and responded with “Go Russia! Go Ovechkin!” And for some reason I said it in my best Russian accent. I’m not sure why though, I don’t speak a lick of Russian, so I figure that if I use a Russian accent than maybe that will help them understand better. I think my logic may be a bit flawed there.

Anyways, aside from Brianne rocking the track, there was a lot of other cool stuff going on at the stadium. It was a great night to be a track fan. I was very keen to catch the 800m final. With Rudisha and the other two Olympic medalists out of this competition, the 800m was wide open. I was really pulling for the Americans, and Nick came oh so close to scoring that gold! 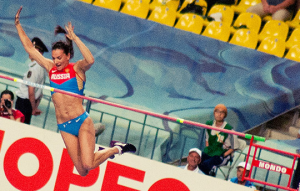 Then there was the women’s pole vault. Isinbayeva is a friggen rockstar in this country and that stadium was absolutely rocking every time she vaulted. The Russians were stoked when she won. They even got the wave going in the stadium — the wave! But it was weird because they do the wave in the opposite direction over here. All of us Canadians were a bit confused, but we managed to get the hang of it. Last night was most certainly a night to remember. Almost made me forget that I gotta run a marathon in three days… almost.

Quick update on my preparation: I am prepared.

Hmm… so, I’m kinda running out of things to talk about here, as the race gets closer my blinders come in and focus narrows in on the race. If there is ever a time when I’m supposed to be entertaining and engaging three days before a major, major race is not that time. Sorry!

So if ya have any questions or anything shoot me a tweet or something (@robbiedxc). It’ll make my job here a bit easier and give me something else to think about rather than that daunting 42.2K I have here on Saturday!

Be well Canada, you guys rock.