“I was so weak and I can’t remember the last mile of the race.”

Kip Tisia came from Rochester, N.Y. with a single goal: to smash the course record at the GoodLife Victoria Marathon. The 26-year-old Kenyan went out aggressively, establishing a lead on a field of runners that included the last three winners of the race. He was on pace to break the course record of 2:13:42, but with less than a kilometre to go Kip slowed to a shuffle. He walked for several minutes, and was caught on video hunched and stammering, fighting to make it to the finish line. Then, he fell to the ground, and began crawling with bloodied palms and scraped knees. Ultimately, Kip Tisia collapsed and could not continue. He was just 300m from the finish line.

A video of Kip Tisia’s collapse surfaced just after the race and has been viewed nearly 500,000 times on Facebook. We reached out to Kip at home back in Rochester, N.Y., where he’s lives and trains, to ask him what happened and how he feels about the attention this video has received by the global running community.

According to the winner of the race, you had a big lead. Why did you take such a big lead?

So for this one race, I had been working on it for a while. I read and studied the course map and I knew what I was getting myself into. 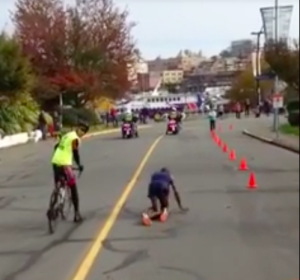 When in the race did you start to feel weak?

Before 30K, at about 25-26K, that’s when started feeling like I needed sugar or that type of nutrition. I was very strong at this point despite me feeling like I needed to eat a banana or something. I stopped after 30K at the water station to check a box that was on the roadside to see if there were any gels, but it was just garbage that athletes left after eating the gels.

Did you feel sick before the race?

I was very healthy during the race and I did not have any problems.

In the video that I’ve seen of you, you looked like you were fighting to finish the race. Did they make you stop or did you decide to stop?

According to the doctor’s report, my sugar levels were very low. The doc told me that’s what made me weak. When sugar levels go down, that even affects the brain. I guess that is why I couldn’t remember myself after the last mile. My brain went blank.

Now you can see how important the nutrition along the course is. Like I said before, after 25K, I started craving for sugar and I kept asking for Gatorade but there wasn’t any left.

How do you feel about seeing that video of you, and knowing that so many people have now watched it?

I feel sad, I wish that had never happened. I would rather they would be watching a video of me breaking the course record and running a 2:12 or faster. That was my original plan.

Do you remember what happened in the video?

No, I was so weak and I can’t remember the last mile of the race.

How do you feel now?

I feel very good now and I have been running. I have been taking a lot of electrolytes and been doing easy running. I did 50 minutes easy this morning.

Tell us a little bit about your background. How did you end up in Rochester, running races in North America?

I come from Bomet District in the remotest part of Kenya, from a village called Leldaet. I am from a family of seven kids and I am in the middle. Went to Tenwek High School where I played volleyball. At this time, I wasn’t running competitively. I had a passion for running and I would compete, though I was not any good back then, but I always made sure that I finished.

After high school in 2004, I was at home for a little while where I would help my mother on the farm. We grew farm produce and we would sell those so we can help pay school fees for my younger brothers and sister.

In 2006, my younger brother had already been running. He told me about running and earning an athletic scholarship to come and compete for college here in the States. So, I started running and competing in local races in Kenya and before I know, I was doing so well.

I applied for different colleges and Youngstown State gave me a full ride and I came over in January of 2009. Back then, while in Youngstown State University, that’s when I knew my running had just started. After school, I came to New York and I lived with a Kenyan family that I knew from Kenya. I’ve been running since then and I am very happy with my progress so far. For someone who loved a different sport, I am one happy man.

What’s your plan for bouncing back from this tough experience?

The race didn’t break me. I will come back stronger. I will be back for redemption. I will come and crush the course record. I am even stronger now than before.

Update (Oct. 19, 2015): A spokesperson for the GoodLife Victoria Marathon has indicated that there was indeed adequate electrolyte drink and gels and waffles on the course at the eight designated aid stations. Tisia also acknowledges that he was offered but did not set up elite bottles before the race; something that he says he will certainly do in future races.