Interesting new study in the September issue of Journal of Sports Sciences that Amby Burfoot recently tweeted about, which appears to show that running on grass causes more hemolysis — the rupture of red blood cells — than running on asphalt.

It’s been known for a long time that prolonged running causes hemolysis. In fact, most forms of prolonged exercise can cause some hemolysis, simply because blood is being pumped around so vigorously and exposed to high oxygen fluxes. But running is particularly susceptible because of the footstrike: the cells get squashed as they pass through the capillaries of the foot at the moment of impact. Is this a problem? Well, excessive hemolysis can play a role in iron insufficiency — but this is generally only a problem if there are other exacerbating factors like overtraining. In this case, hemolysis is mainly interesting not because it’s a serious problem, but because it can tell us something about how different surfaces affect footstrike impacts.

The new study, by researchers in India, is very simple. Ten runners ran for an hour at 60-70% max heart rate on grass, while another 10 did the same on asphalt. Blood samples were taken before and after. The researchers expected to find more hemolysis from the harder asphalt surface, but they instead found the opposite. So what’s going on? Although the grass was superficially smooth and even, they speculate that its underlying unevenness affected the runners’ strides:

Running on uneven and inconsistent surfaces like the beach or grass can cause more injuries because each step creates varying pressures and forces in the feet, ankles, knees and hips as runners most constantly adjust to the surface. These natural surfaces also tend to slope and create a dangerous off-centre force on the ankles and feet while running. Even though the grass surface appeared to deform relatively more than asphalt, it was assumed that the uneven nature could have led to inappropriate pressure distribution and impact forces on the foot, which could have resulted in an increased haemolysis in these runners.

As Burfoot points out, this is reminiscent of Benno Nigg’s ideas: whether a surface is hard or soft, your leg automatically adjusts to cushion the impact. But on surfaces where you’re unable to correctly predict exactly how your foot will land — i.e. grass — that automatic adjustment can’t take place, and that’s when strong uncompensated forces shoot up your legs.

So it all fits together, right? Well, I have one caveat. Here’s the data from the new study for the two key measures of hemolysis (unconjugated bilirubin and lactate dehydrogenase, for those keeping score at home): 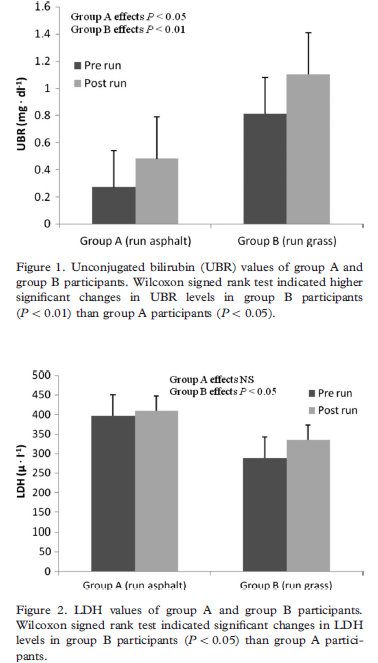 As you can see, the pre-run differences between the two groups (which were assigned randomly) are greater than the change from pre- to post-run! So statistical analysis may suggest that the two groups responded differently, but for now I’d treat this finding very cautiously. This study really should have been conducted as a randomized crossover trial, so that each runner was measured under both conditions. Bottom line: great idea for an interesting study, but until the results are replicated somewhere else I’d take the conclusions with a grain of salt.