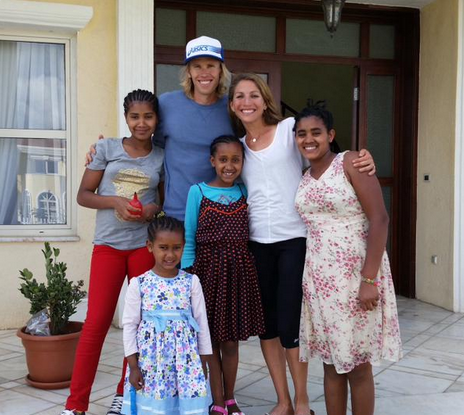 American running couple Ryan and Sara Hall have just gone from a married couple to a family of six. This comes after the distance stars adopted four Ethiopian sisters: Hana, Mia, Jasmine and Lily. The girls are ages 15, 13, eight and five, respectively.

The couple has been planning to have children for a long time now. “We had always talked about growing our family through giving children a home that might not otherwise have one,” wrote Sara in a recent blog post about her new family.

When the time was right, the two runners began to go through the process of becoming adoptive parents and jumping through the loopholes to meet all criteria.

They began their search in Ethiopia. The reason being, explains Sara, is the country has four million orphans. “Though adoption is only one fractional solution to this orphan crisis, for those few it is life-changing,” she writes.

As they started looking, they found children most in need of homes were those over the age of three. Many prospective parents look only for infants. By age 16, children are no longer eligible for adoption. That deadline would have been fast-approaching for Hana who is currently 15.

The Halls met their now daughters this year after time spent training in the country. They visited the girls in the orphanage without the kids being aware that they were contemplating bringing adoption. When the Halls invited them into their family, the girls were thrilled.

Going forward will mean adjustments for the two competitive runners. They still plan to compete at high levels however they know that taking off to training camps around the world will not be nearly as feasible. Because of Ethiopia’s running culture though, the four girls already love to run.

Check out Ryan’s video  of the two youngest, Lily and Jasmine, running below!

Excited for you to meet these 4 sisters, now our daughters, adopted from Ethiopia! Hana, Mia, Jasmine & Lily Hall pic.twitter.com/oGmovklIaV

Our girls love to run! Shot a little video in Ethiopia of the two youngest the other day. #ProudDad https://t.co/A2OhChTExo — Ryan Hall (@ryanhall3) September 12, 2015

Already loving being a dad! My heart is bursting with love for all my girls