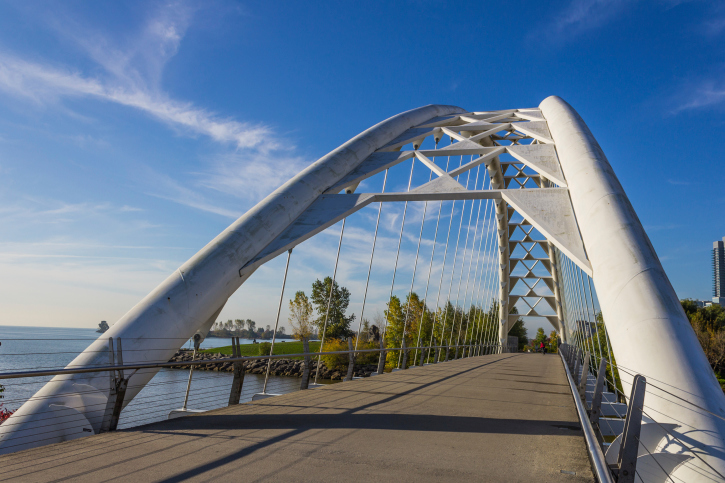 Rick Wright heads south and watches for roots along the soon-to-be-frozen ground. The trails in Toronto is where he sorts out most of his problems as he runs the nearly half-marathon distance to his work at Mountain Equipment Co-op (MEC). His feet move quickly bringing him from his home in the city’s north down to the shores of Lake Ontario at the southern edge of the city. For the most part, he follows along Mimico Creek– the body of water that draws a diagonal from his house to the paved water front path that takes him east until he reaches his work in the downtown core.

“When I’m running, I see things I’ve never seen before,” says Wright. Despite living in the city for decades, there are always new details which have gone unnoticed. When Wright nears the lake, he looks up and sees a sign with the words “Exit stage left.” He’s reminded of the 1981 Rush album. It’s details like this, he says, that get missed in the car or on the bike.

To get to his shift at MEC, Wright runs the 19K route through trails and along the water before he cuts up into the big city bustle where the store is located. To get to work on time, he leaves about an hour and a half ahead of time– an hour and 45 minutes if he’s being on the safe side. That time is usually used to reflect, sort out issues, or just zone out. “I have fewer worries, I get that chemical buzz,” he says. “When I’m done the run, I’m disappointed.”

This is something he does two or three times a week. The rest is done on a bike. He never drives. “Once I started working for MEC, I got in the habit of putting away my vehicle and running.” Upon arriving, he has time to shower and change before heading onto the floor to help other active people get the right gear for their sport of choice. He’s been at this job since 2007 when he made the switch from working in education. He started run commuting that same year. “I’m a real happy camper here,” he says. “No pun intended.”

RELATED: “Stories from the run commute: I run every day since returning from my maternity leave.”

Wright is 61. He grew up in rural Ontario and has been running to some degree since he was in school– he was on both the track and cross-country teams. When he took his running out to the roads, it was not yet a popular sport (not even close). As he runs along Toronto’s trails now, he thinks about how, in the early days, there would be only a handful of other runners out on the roads.

This is a hobby which he has continued throughout his life. He has done his fair share of racing with trail races being his more recent focus. But right now, he has no race goals at all. He deliberately took a break this year switching his focus to running to work on a regular basis, year-round to enjoy the feeling of getting out. Right now, he runs for its own sake. This is a decision he made after struggling with a love-hate relationship with the sport. The buildup to the goal races just wasn’t enough. “At the end, I’d be disappointed, not in my performance, but that it was over,” he says. “I was falling out of love with running.”

But that’s something that Wright has been able to solve. Rather than stopping running, he pulled out a hydration pack and threw in a change of clothes, his phone, his wallet, and water. As for clothing, right now in early December, he’s layering up: a base layer, a thin mid-layer, soft shell jacket and thin tights are his go-to. When temperatures dip, he’ll make necessary adjustments because as he says, “There’s no bad weather, just inappropriate gear.” Spoken like a true gear salesman.

Funnily enough, when he stopped focusing on his times, they got faster. Maybe he’ll get back  at the racing later he says, or maybe he’ll try a duathlon– it’s to be determined.