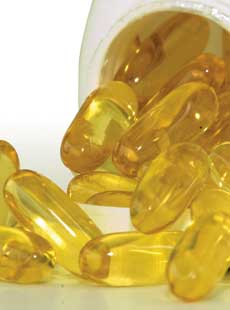 In the last decade, the popularity of fish oil supplementation has exploded into a billion dollar food-supplement industry, riding on the back of the support of the Mediterranean diet and promise of research studies showing fish oil’s anti-inflammatory properties. Some have gone as far as to claim that fish oil offers therapeutic benefits for those suffering from cardiovascular disease. A new study from the University of Pennsylvania has questioned the benefits of these anti-inflammatory effects.

The fish oil pill that you take is a synthetic version of marine fish lipid-derived molecules. These are called specialized pro-resolving mediators (SPMs) and have shown anti-inflammatory properties in cell culture tests as well as tests on live animals. Conventional thinking then extended into the assumption that these anti-inflammatory properties are beneficial to overall health.

What researchers from the Unversity of Pennsylvania focused on was the difference between conusming fish oil through the actual consumption of fish and consuming it in supplement form. The two are not the same. When you eat fish, you are consuming the omega-3 polyunsaturated fatty acids in their triglyceride form, which are bound to a glycerol backbone. Fatty acids are stored this way in the natural world because of the tendency of free fatty acid to oxidize rapidly. However, when you create fish oil supplements, you separate the fatty acid from its glycerol backbone. What this means is that the natural form of marine fatty acid is much easier to digest than the supplement form.

The researchers gave healthy volunteers high doses of fish oil that had been previously shown to lower blood pressure and platelet aggregation. They also analyzed subjects taking lower doses, such as those taken by the general public. What the researchers were looking for was the formation of SPMs indicating an acute inflammatory response and resolution.

Basically, what the researchers found was that the body failed to consistently recognize SPMs, in response to inflammation. This leads to skepticism as to whether fish oil supplementation truly has health benefits of anti-inflammatory properties, or whether the body simply has its own efficient system for anti-inflammatory response.