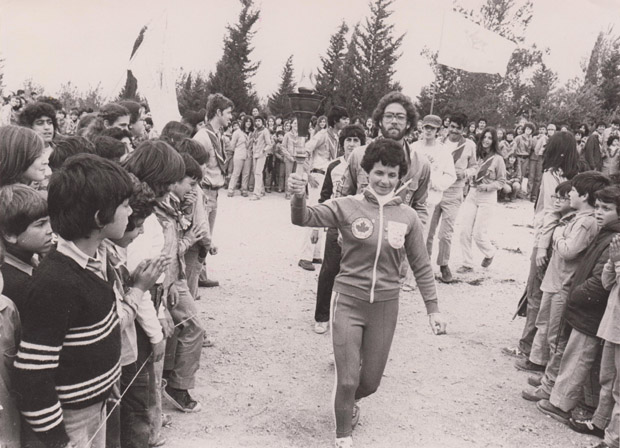 The extraordinary story of Sylvia Weiner, a Canadian who survived the holocaust and went on to be a pioneering marathoner

Her 4’11” frame has been a fixture on the Montreal running circuit for decades. Sylvia Weiner, now 84 years old, has been running out of the YM-YWHA for over 50 years. She’s known for her quick shuffle up Mount Royal, witty comebacks to often cheeky male running mates, and perfect attendance. Barring a medical emergency or a hurricane, Weiner runs every morning. Rain, sleet or shine in Montreal, or the balmy winters in Miami.

“I used to run three races in one weekend,” Weiner says from her winter home in Florida. “Short races – in the morning, I would run a 10K and then later on a 5K and the next day another 5k. One year I ran seven marathons,” she says. “It’s not like that anymore. Now I run every morning. Different people, different times. One of them is a grandfather now and I knew him when he first got married.”

Her running buddies say the sport defines her life.

“I was the kid of the group when I started running and she was the older one,” says Jeff Waxman, 57, from Montreal. “Here was this frail, small woman with legs like little pistons. She trained with me for my first marathon. She’s a legend at the YMHA. Her photos and awards are all over the place. But she doesn’t talk much about her past.”

Weiner’s impressive race numbers are hard to deny. Participation in 75 marathons, over 2,000 shorter races and more age-group titles than she can recount.

She’s also a running pioneer. In 1975, at age 44, she earned the first women’s master’s title at the Boston Marathon. The year before in 1974, she was one of just a few-dozen women competing in the previously male-dominated race. During that 1975 race, Weiner remembers having to fend off cheering Wellesley College students who lifted her up in the air and offered her beer mid-race.

At 3:21:38, she finished as the first 40-and-older female, but to little fanfare. Twenty-two years later, her name was engraved with other winners during the 100th anniversary ceremony of the Boston Marathon.

I always wanted to live. I never believed I was going to survive. That I did, helped me move forward. 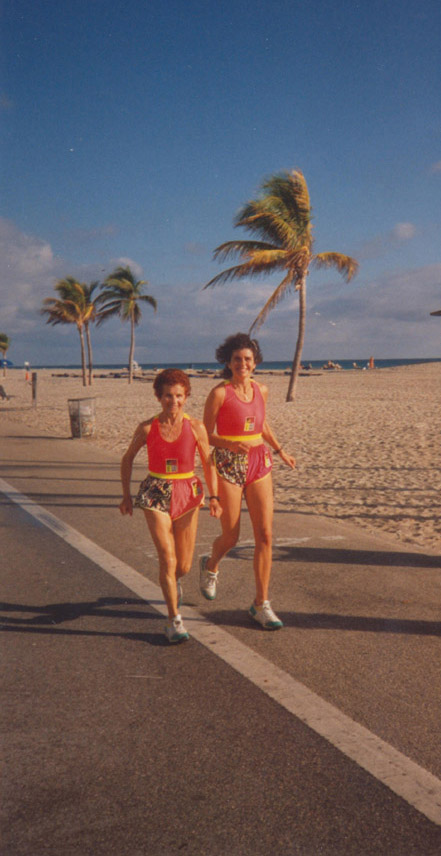 But there is a darker chapter that preceded Weiner’s celebratory one. The numbers for that part of Weiner’s life are still visible on her left arm in faded green ink. A tattoo she unwillingly received before she was even a teenager.

At age 12 in the midst of the Second World War in Poland, Weiner was separated from her parents and seven siblings, who were taken away to the Treblinka extermination camp. It is believed they perished there. Weiner was shipped between three concentration camps – Majdanek, Auschwitz and Bergen-Belsen – between 1942 and 1945.

The six-digit number was tattooed on her arm when she was imprisoned at Auschwitz-Birkenau, the largest of the Nazi concentration and death camps located in southern Poland. More than 1 million people – mostly Jews and other perceived enemies of the Nazi state – died there. Many were gassed to death in the bathhouses there, while others died from overwork, disease and insufficient nutrition.

During her imprisonment, Weiner lived in cramped barracks shadowed by the clouds of darkened ash billowing out of the camp’s chimneys. “I remember watching the new arrivals to the camp,” recalls Weiner. “The chimneys were burning and the people didn’t know. Then they smelled the burning f lesh and then they understood.”

It was at this camp that Weiner was overlooked by the infamous Josef Mengele, the notorious concentration camp physician who performed brutal experiments on prisoners. “Mengele would come into the barrack many times and choose girls I slept next to. Then they were gone forever,” says Weiner.

She may have been spared from Mengele’s attention but Weiner wasn’t immune to the dire conditions. She suffered from typhoid fever, twice. During her second bout, she lay beside another sick young girl named Anna, from Holland. The two girls lay uncovered on the barrack’s bare floor, vulnerable to the brutal elements and riddled with lice. But while Weiner was able to endure, her friend didn’t. “She was burning up with a fever, and I was getting better. I left the barrack one day, and when I returned, I was told she had died.”

Ten years later Weiner saw the book The Diary of a Young Girl, and she recognized the face on the cover. “I realized the famous diary was written by the Anna I knew,” Weiner says.

At the time of Frank’s death in the barracks, Weiner had little time to mourn. She was struggling through the terror. “I always wanted to live. I never believed I was going to survive. That I did, helped me move forward.” 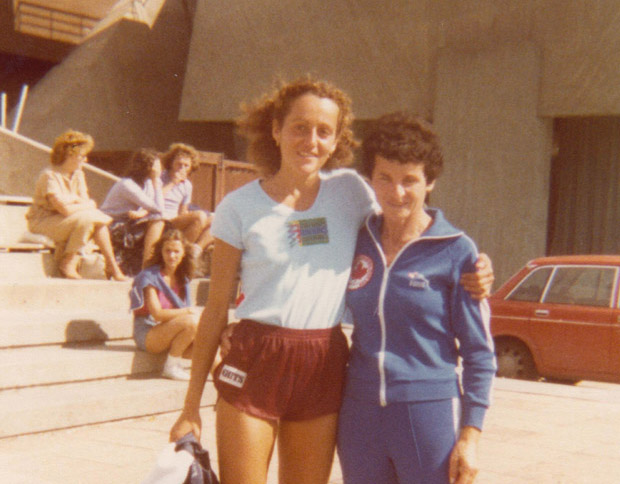 Weiner survived the camp and after two years living in the converted barracks in Bergen-Belsen, she connected with a distant relative living in Montreal. She moved there when she was 16 and started to live the life of a free person. Weiner eventually married and had three children.

“There are memories from the camp I can never lose,” says Weiner. “I told myself that it’s going to be like that for as long as l live so I tried to have a normal life.”

While Weiner tried to resume a sense of normalcy as a mother and homemaker, she still suffered. Sleepless nights. Mounting anxiety. Dangerous dips into depression. The memories of her time at the concentration camps were just too vivid, and didn’t fade with time. Like a soldier suffering from post-traumatic stress disorder, flashbacks of the inhumanity she witnessed would interrupt her daily life, leaving her paralyzed by fear.

A doctor told Weiner that while she had nothing physically wrong with her, her nervous system was under constant strain. He prescribed tranquilizers and sleeping pills. The medication eased some of the symptoms but left Weiner feeling weighed down and not her best self. It was amid this fog of prescription drugs and autopilot living in the 1970s that Weiner was introduced to running.

“I wanted to register my daughter in daycare at the YMHA but I was told I had to be a member,” says Weiner. So, she joined a fitness group. One day, the group went on a short run around the park. Weiner remembers feeling like she was going to hyperventilate. But she also recalls feeling good, physically and emotionally, for the first time in years. The next week, she joined the run again. Even though she still found it tough to breathe and she was the only woman running, Weiner made it a weekly activity. The physical effect of the running was just too good to pass up. She could endure the disapproving glances during a time when it was still shocking to see a woman out for a run.

“A friend told me, women are not supposed to run. You should be ashamed of yourself. Play tennis instead,” says Weiner, who defied them all by joining the ymha men’s running group. Known as the Wolf Pack, named after its founder Wolf Bronet, a fellow Holocaust survivor, the running group met regularly and trained for races. Bronet encouraged Weiner, telling her that if she stuck with the strict training regime, she could probably qualify for the Boston Marathon, which had officially opened up to women in 1972. Weiner started running with the group three times a week. She reduced her doses of prescription drugs, and eventually she didn’t need them. “The running calmed me down,” Weiner says. “At first, I didn’t understand what others meant when they talked about the runner’s high, but then I started to feel elevated during runs, and the high lasted hours after my workout.”

Weiner became a Wolf Pack regular and trained with them for Boston. Her commitment and speed eventually wore down the not-so-welcoming male members. “They didn’t like that I was there, but I tried to be nice,” says Weiner. “I bought the team Wolf Pack crests for our jerseys.”

She first ran Boston in 1974 in 3:47. The next year, she nabbed the first-ever women’s master’s title. And she continued to run marathons for over 20 years.

Weiner’s daughter Debbie is also a runner, and joined her in numerous races. Weiner’s two sons run occasionally but not as frequently as Debbie and certainly not as much as their mother. Weiner’s late husband was not a runner. During one race, Weiner recalls him offering her a piece of pie. “I was just near the finish, and I was yelling at him, ‘Get away with the pie!’” says Weiner with a laugh.

Weiner says her favourite races are the Boston Marathon and a marathon she ran in Israel. “It was a tough marathon,” Weiner remembers of the hot and arid climate, not conducive for distance running. “But when they called out my name in Tiberias, it was very emotional.” 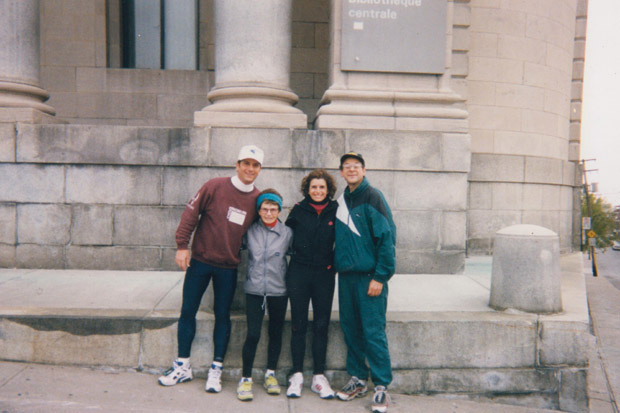 She raced shorter distances until 2014, when a melanoma diagnosis required surgery and took her out of competition. Even after surgery, she still runs every day.

“Running is Sylvia’s life,” says Elliot Mechanic, Weiner’s former running partner and her dentist in Montreal. “Runner is the first word that comes to mind when describing Sylvia. She doesn’t look like a runner. I was 30 when I started to run with her, and she was around 55. And I thought, ‘What is this little old lady doing running?’ Then she started to run and she was the real deal. She runs effortlessly. She would run every day, even in the worst weather. She lived for the race.

“She’s a young person in a shrinking old person’s body. And she has the best sense of humour. We guys would be as crude as possible to see how far we could go with her. And she would always have the best comeback to our lewdest jokes.”

Mechanic says that her wit shows her resilience and ability to deal with the darker side of humanity. “I have her book she wrote about her experiences during the Holocaust. But she never talks about those days.” While she may not talk about her difficult past with her running buddies, Weiner speaks to students at elementary and high schools in Miami and Montreal about the atrocities that she witnessed.

“A little girl gave me a note at one of my talks. She wrote, ‘Sylvia, I would like for you to know that I love you and all your strengths. You are an inspiration. Keep sharing your story because the world is listening. Sincerely, Jasmine.’ And then she drew a heart.”

Weiner says she always seeks to see the positive side of her life, and closes many of her talks with running stories.

She may not race any more, but running remains a daily part of Weiner’s life. Her identity is defined not so much by the survivor’s struggle but by the grit and endurance it gave her in the 70 years that followed.

“I didn’t think I would live this long,” says Weiner. “Time goes on. I’ve made good friends. Many of them runners. And it gives me a good feeling that I am accepted.”