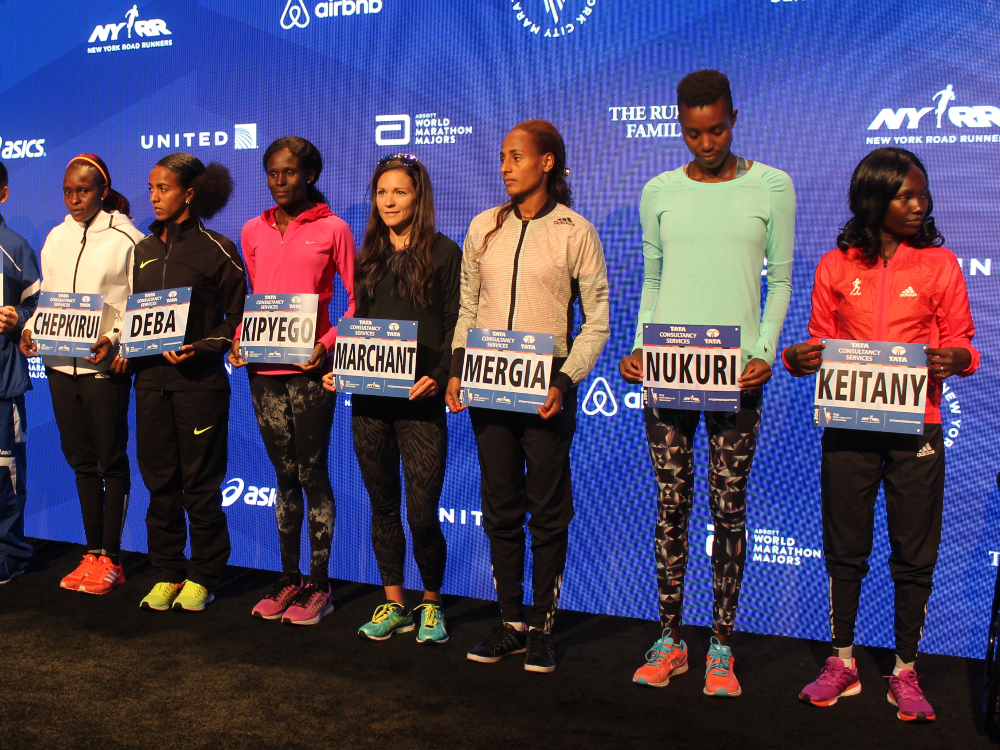 The world’s largest marathon will have the running community’s attention on Sunday morning as the New York City Marathon gets underway with the women’s race at 9:20 a.m. local time. There will be three Canadian elites on the start line including an Olympian, a world championship marathoner and one of the nation’s top masters runners.

Stream (live as of 9 a.m. EST, provided by CBC Sports)

See the Canadians to watch for on Sunday morning.

The fastest woman in Canadian marathon history will be making her New York City Marathon debut on Sunday. The Olympian, who contested both the 10,000m and marathon in Rio, has a lifetime best of 2:28. Because the NYC course is rather challenging in terms of elevation, Marchant will likely be going for placing rather than a record-breaking time. The New York City Marathon runs through the five boroughs: Staten Island, Brooklyn, Queens, the Bronx and Manhattan.

“New York has been on my bucket list, and it’s, from what I’ve been told, the best experience,” she says. “So I’m hoping to go out there and share that experience.”

“I took a full week off and just enjoyed Rio and watched my teammates compete, and then I went to Argentina for about five days,” Marchant says of her transition back to training after the Olympics. “So that was my introduction back into running. I just ran easy a couple of the days that I was there. And then by the third week, I was back to just running every day. And then by the fourth week, we introduced workouts and doubles again. So we took a good four weeks to really ramp it up.”

The women’s field has a fascinating dynamic this year as there are a number of women who have run under 2:20. There are a number of Americans, notably Molly Huddle, who will be making their debuts at the distance. Olympic triathlon champion Gwen Jorgensen is also in the field and will be running her first marathon less than three months after Rio.

Rob: " this is great, I'm gonna win!" @jkent_ "no chance bud." Rob: "yeah, you're probably right…" Justin was indeed correct, I was no where near the win. But at least I had myself a great time. Thanks to @runcrswest for putting on a great event at the #eastside10km. Congrats to everyone whom ran and rolled, Vancouver has an amazing running community and I am proud to be a part of it.

Known as one of Canada’s most popular marathon runners, Rob Watson will be on the start line at a major marathon for the first time since London last April. He is aiming to run under 2:20, a time he has eclipsed many times in his career. He has run Chicago, London, Boston, paced Berlin, and will check off the New York City Marathon as he approaches running all six World Marathon Majors. The only one he has not participated in is Tokyo. (Though Watson may not count Berlin as he did not finish nor try to.)

“Gonna give it a go,” Watson tells Canadian Running. “2:19:59 or bust.” The 33-year-old has 10 times broken the 2:20 barrier in the marathon. Though he has scaled back his running slightly from past years, where he has represented Canada at the world championships, Watson wants to run 20 sub-2:20 marathons. He has a 2:13:29 lifetime best.

Defending New York City champion Stanley Biwott is one of the favourites to win and defend his title.

Meet Marilyn Arsenault @1fastdiva, Saucony Hurricane Athlete & Founder of Mindful Strides, from Victoria, BC. Marilyn is running this weekend’s @NYCMarathon. Follow her story on our Facebook page and wish her ? good luck! #FindYourStrong

One of the nation’s top masters runners, Marilyn Arsenault, is the third Canadian to watch for at the New York City Marathon on Sunday. She holds multiple Canadian masters records and has represented Canada at the IAAF World Cross-Country Championships.

Among her records is the women’s 45-49 marathon record, a 2:40:20 clocking, her lifetime best, at the 2013 Toronto Waterfront Marathon. She’s 48 and resides in Victoria where she operates Mindful Strides, a coaching clinic for runners looking to improve their form.