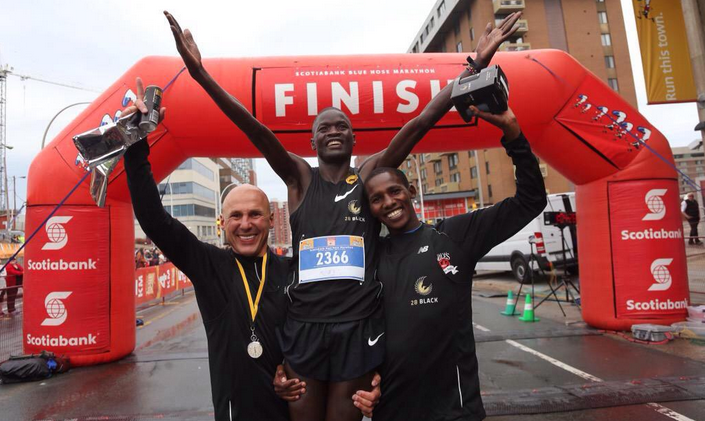 Two-time world marathon champion Abel Kirui of Kenya ran the half at the Blue Nose Marathon today in Halifax to honour the late Cliff Matthews, a well-known Halifax coach.

According to The Chronicle Herald, the two met this winter when Matthews was in Kenya training Canadian elite masters runner Denise Robson. He went with another well-known Halifax man, Ethan Michaels — a runner who sponsored Kenyan athletes to race last year’s Blue Nose Marathon. The trip had a sad ending though when Matthews died of a heart attack. He was 70.

After Matthews’ death, Kirui said he would come to Canada to race the Blue Nose Marathon in the coach’s memory. He entered to run the half-marathon today running it in 1:04:03. That was quite the win today. Jason Guy came second place behind the elite runner. He ran a 1:19:43 half-marathon. The Blue Nose Marathon is Halifax’s most popular running event but local runners are not likely to see Kenyan elites on the course.

This half-marathon was ran just weeks after Kirui had to drop out of the Boston Marathon. Days before, he got an illness which impacted his performance. The 33-year-old runner made it to the 35K mark before dropping out.

Right now he’s focusing on running at the world marathon championships Beijing hoping to take his third title. Kirui has a marathon personal best of 2:05:04 which he set in Rotterdam in 2009 when he placed third.