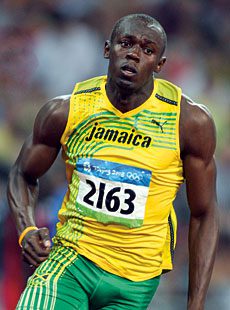 Usain Bolt is the 2013 World Athlete of the Year.

The 27-year-old won the award for the fifth time in six years. Bolt became the most decorated athlete in the history of the IAAF World Championships this year when he won triple gold in the 100m, 200m and 4x100m relay. Bolt now has eight gold medals and 10 medals in total.

Fellow Jamaican Shelly-Ann Fraser-Pryce was named the top female athlete of the year. She also won the same events as Bolt this year in Moscow.

At the awards ceremony in Monaco Bolt said he would spend 2014 focusing on breaking his own 200m world record of 19.19. “The 200m is much easier than the 100m to try for a record and that would be my main focus this season,” Bolt told the BBC.

Bolt said that a potential sponsor did a background check on the situation and were informed that Jamaican athletes could be banned from competing at the 2016 Olympics.

“I know we’ve been going through a lot when it comes to drug testing, Wada and the IAAF, but this is causing a lot of problems for me,” Bolt told the Guardian. “When a sponsor came up to us and was saying ‘we’d like to sponsor you’. They then used an agency that does background checks to figure out if it’s viable to sponsor you and it came back that Wada had said I would not be eligible to run at the next Olympics. That information is not correct, so there are a lot of things that are going on with this drugs thing that I really feel they need to clarify because, for me, it’s causing problems for me when it comes to making money from my sport.”

In September, Bolt re-upped his contract with Puma for $10 million annually until 2016. The world’s fastest man has said he will probably retire after the Rio Olympics, but may extend his career into 2017 in order to run at the World Championships in London.