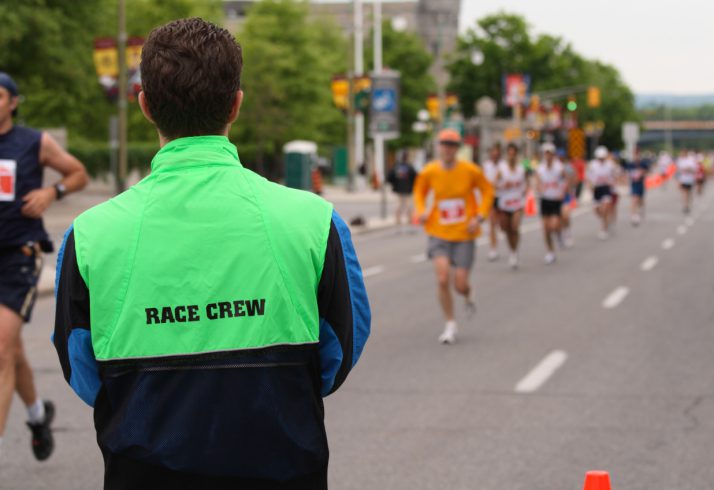 An event of 36,000 participants that can attract nearly 500,000 spectators needs a lot of hands to help out.

The Boston Athletic Association this week opened volunteer applications for the 2014 Boston marathon, and with so few entry bibs to go around a great and different way to experience to event is as a volunteer. The volunteer applications have opened early to account for needing about 10,000 volunteers to help the marathon go smoothly, 1,500 more than last spring. Applications are open until Jan. 6 , 2014, and with the race nearly sold out in almost all avenues for obtaining bibs, helping out can be a great way to experience the race.

In 2010, Dr. Anne Marie Hospod volunteered with the medical tent at the New York City marathon. She had run the event in 2008 but was fresh off completing her medical degree and was looking for a new way to see the race. She’s also helped out at other races, including Toronto’s Yonge Street 10K.

“I loved the energy of the race, and wanted to be a part of the medical volunteer community at a race that I loved so much,” said Hospod in an email.

In 2010 Haile Gebrselassie dropped out of New York City marathon with an inflamed knee shortly after crossing the Queensboro bridge with the lead pack. Hospod was stationed in mile 16 medical tent.

“He entered from the back of the tent—and to be honest, we were quite star struck,” said Hospod. “Of course, as medical professionals, we kept our cool and went to talk to him as if he were any patient. Our medical director began the questioning, but I asked him how he felt, and how his knee had been feeling prior to and during the run.”

Volunteers at Boston get a special volunteer jacket and a free ticket to the post-race party, but Hospod claims it’s not about the perks you pick up, but the experience of seeing the event from a different perspective. It’s also not easy. All the medical volunteers are expected to attend a multiple-hour seminar and are given a “mini-textbook” of plans for treating certain injuries, schedules for the day and emergency plans.

“It is astounding to realize the extent to which every detail and every possibility is considered. The organizers work diligently and are very systematic with their planning. […] The medical tents were set up to take care of the most common complaints that are present out on the course. […] The medical issues also change depending on the runner’s pace and training of course. The faster runners stop because of acute problems, whereas the slower runners stop mainly because of cramping, poor nutrition, or dehydration. It makes a big difference if a runner is out on the course for three hours, compared to six hours.

Hospod, an avid runner herself, says the experience and memories will definitely bring her back to volunteering at more races in the future, but she may never get another chance to meet Haile Gebrselassie. Of course, she never expected that when she first signed up to volunteer either.