Ed Whitlock is one of the most talented and intriguing runners alive.

The 85-year-old Milton, Ont. resident holds age group world records from track distances to the marathon, in some cases being 30 minutes better than the next fastest person in history. Canadian Running had the chance to catch up with Whitlock shortly after he ran 3:56 at the 2016 Scotiabank Toronto Waterfront Marathon. Whitlock broke the world record for 15K in upstate New York one month after his Oct. 16 marathon.

In 2016, he reshuffled the age group world record rankings for men 85-89 following his birthday in March. Many look up to Whitlock as a source of inspiration as he continues to run fast times, sometimes world records if age grading is taken into account, in his mid-eighties. 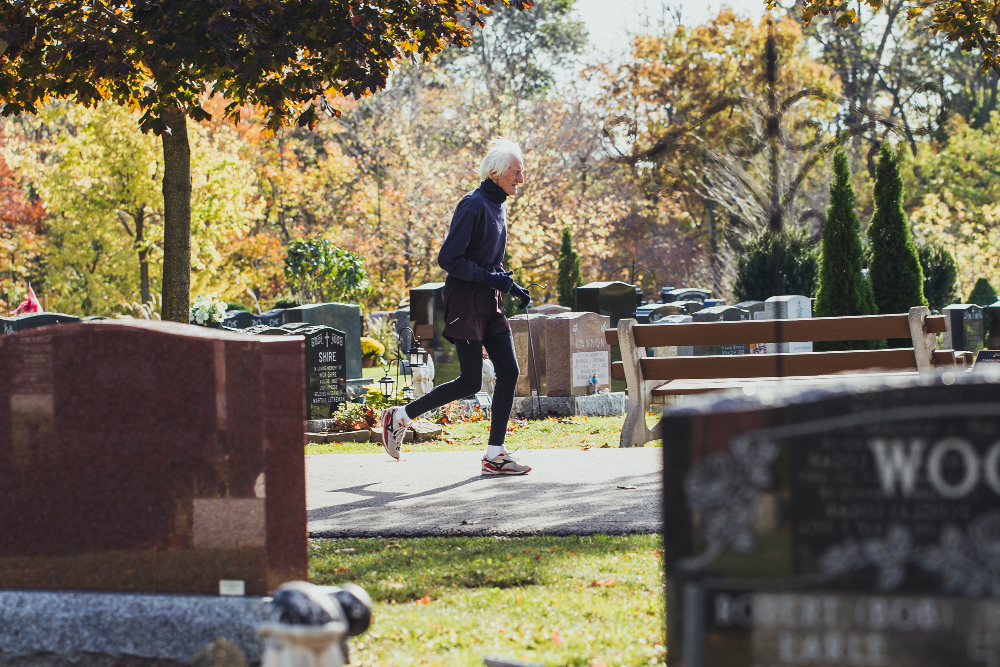 One of Whitlock’s most documented training rituals is doing daily runs at the cemetery just steps away from his home in southern Ontario. There, he does laps, though he does not keep track of the number, and runs for upwards of three hours at a time. The rationale is that it’s plowed in the winter, is sheltered from the wind and, in the event of injury, his home is just blocks away.

Whitlock, who grew up in England, was a standout runner in primary school and into college. His medals and trophies are on display at his home and tucked away in the corner of his kitchen. Injuries derailed his running career after college leading him to quit the sport, for the most part, until his forties. His goal of a sub-3:00 marathon at 70 helped vault him into running celebrity status. He accomplished that goal when he was 72, a feat replicated by no one else in history.

See the five-page feature of Whitlock in Canadian Running‘s January/February 2017, which will be hitting newsstands in the coming weeks. You can subscribe to the magazine here to be the first to receive each bi-monthly edition. (There is also an annual trail special released each spring.) In the piece, Whitlock discusses whether a marathon at 90 is in the cards, the notable people he trained with and raced against during primary school, one being Alan Turing, the man who helped solve the Nazi Enigma code during the Second World War, and much more.

If you haven’t already, make sure to watch the five-minute video on Whitlock at the top of this page.