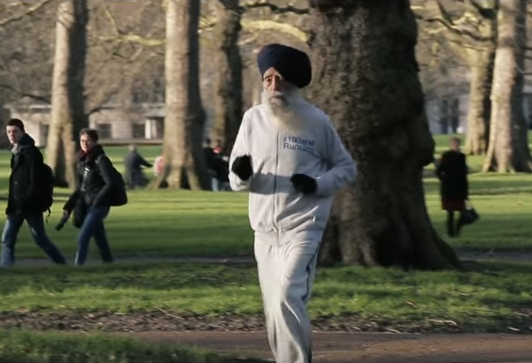 At 104 years of age, Fauja Singh still incorporates running in his daily routine.

“I have won marathons in England, Canada, in the United States but now in India, I only want to win hearts,” Singh describes in the video.

When Singh reached the century mark, he raced at the Ontario Masters Association Fauja Singh Invitational Meet, a special event put on in Toronto, where he set numerous world records from the 100 metres up to the 5,000-metre distance.

In 2011, Singh became the first person to complete a marathon at 100 years of age by finishing the Scotiabank Toronto Waterfront Marathon.

Singh was born on April 1, 1911 and originally said he would retire after finishing the 10K at the Hong Kong Marathon in 2013.

RELATED: The average age of a track fan is 55, Seb Coe wants it lower.

A British citizen, Singh was born in the Punjab region of India, located in the northern part of the world’s second-most populous country.