The race is known for its hot temperatures and extremes of elevation change, and Walmsley’s achievement is all the more amazing when you take into account the temperatures reached (41 C at the mile-78 river crossing) and the 5,513m of elevation gain and 7,000m of descent.

Walmsley is a trail guy who has never run a road marathon. He’s been building a rep for outrageous speed–and spectacular fails–since before his first WSER effort two years ago, when a wrong turn took him two miles off course and destroyed his chances of finishing 30 minutes ahead of the course record, which he was on track to do. (He finished 20th.) His intended comeback last year ended in defeat when he couldn’t keep nutrition down and had to drop out of the race. Some wondered–foolishly, it now appears–if Walmsley had what it takes to get the job done. They’re not wondering any more.

Here are some screenshots of Walmsley’s Strava data from the weekend’s race. The first shows the race overall.

This second shot shows the final 5.63K, from No Hands Bridge to the finish at Placer High School in Auburn, which Walmsley ran at 5:10 per kilometre pace, after 14 hours of running. 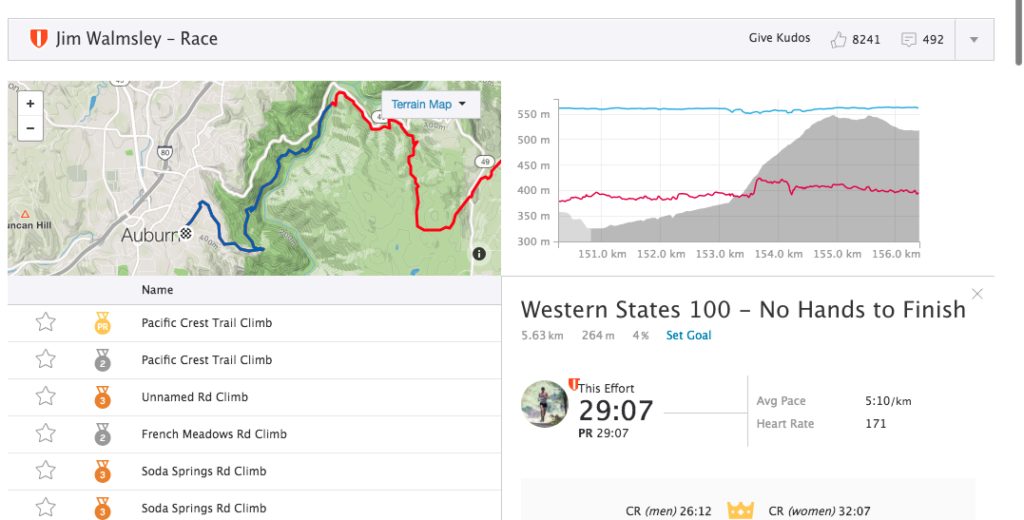