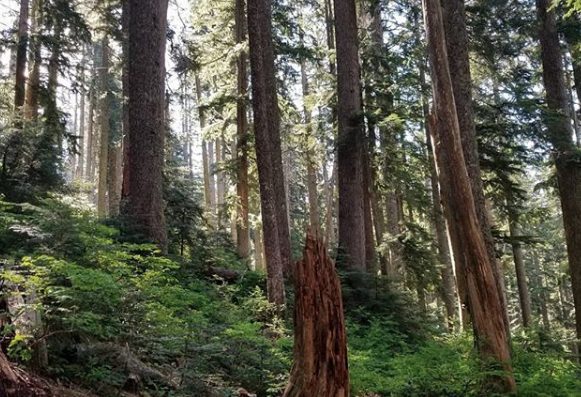 Two Vancouver residents, Ron Adams and Neil Wakelin, made their way along 30 miles (48K) of roots and rock to celebrate their 28th Knee Knackering North Shore 50K races yesterday. Adams, in the 60-69 age category, completed 35.7K; Wakelin, in the 70+ age category, finished the race in 9:50:20.

It was the 30th running of the race, which started back in 1989 with a handful of people. Local ultrarunning celebrity Gary Robbins was on hand to announce the finishers as they descended into Deep Cove, and course record-holder Ellie Greenwood was also present, volunteering at an aid station.

THIS is trail running. Guy comes into half way station of 30 miler @kneeknacker shoe literally ripped in half. Bystander takes own shoes off his feet and hands them over. Trail ❤️ community Rocks! pic.twitter.com/1MlrgjLMSB

Just slightly longer than a traditional marathon at 30 miles (48K) and billing itself as Canada’s largest ultra, the Knee Knacker starts at Horseshoe Bay and follows the Baden Powell Centennial Trail up and over Black, Cypress, Grouse and Seymour mountains, ending at Deep Cove.

Though the 4,800m of elevation change makes it anything but easy, the race’s convenient location, well-stocked aid stations, numerous volunteers, post-race festivities and well-maintained course make it highly accessible, and the finish rate is over 90 per cent. A high percentage of finishers are first-timers at this race. Runners must finish within the 10-hour cutoff.

The one and only Peter Findlay, former record holder and 20 time finisher is currently 1st male over 50 (he’s 59!) at the Dam in approx 2:45 elapsed. #kknstr18 pic.twitter.com/MN1oN3l7Zj

The top finishers overall were first-timer Mike Sidic in 4:55:29 and Darbykai Standrick (5:22:53). This was Standrick’s third win (she also won in 2015 and 2016), and a seven-minute improvement over her previous PB at this race.

North Vans Jeanelle Hazlett is 4th woman at the Dam (half way) in 2:54 elapsed. #kknstr18 pic.twitter.com/jmbIibvdqj