If you spend enough time gallivanting about in the forests and hills, your apex-predator status in the food chain will be challenged. You might disturb some wasps, encounter a cougar, or even stumble upon a Sasquatch.

Sasquatch spotted!!! I'm not superstitious… just a little stitious. Have you noticed something strange on our Sherman Pass/SR 20 webcam before? If you look closely by the tree on the left there looks to be something… might be Sasquatch… We will leave that up to you! pic.twitter.com/RaDGqQdEUF

Just south of British Columbia’s border, the Washington State Department of Transportation has shared the latest glimpse of what generously looks like a Sasquatch. It doesn’t look all that fast or graceful, but still… 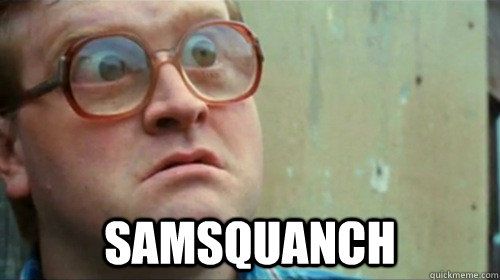 “Bigfoot is blurry, and that’s extra scary to me.
There’s a large, out-of-focus monster roaming the countryside.
Run, he’s fuzzy, get out of here!”
~ Mitch Hedberg

Luckily for our brave readers, running is the best strategy against the average Bigfoot or Sasquatch encounter.

Animal threats of the non-Sasquatch variety

But what about wasps? These little menaces can strike at any time, and in the drier summer months they become especially treacherous. They can be incredibly quick over short distances, upwards of 25 to 40 km/h. Fortunately they do lose steam after a short chase. So practise up on your hill repeats and pick-ups, and consider carrying an Epipen, for real.

Owls are another alpha predator that have been known to test the occasional trail runner. I’ve experienced a terrifying barred owl encounter, which involved an initial sneak attack, multiple follow-up dive-bombs, and embarrassing amounts of frantic flailing. It turns out that this is a thing that happens to people. Owls think that they run the forest, what with their massive talons and silent flying abilities. You certainly can’t outrun them. The aforementioned flailing tactic did take us to a draw, with neither of us seriously harmed… and now I have a whole new respect for owls–a bunch of beautiful majestic jerks.

My home on Vancouver Island has a lot going for it. Especially cougars. Of the estimated 4,000 cougars in Canada, 3,500 live in B.C. Of these, nearly a quarter reside on Vancouver Island (itself only three per cent of B.C.’s land area), resulting in the highest concentration of cougars in the world. Fortunately, the risk of being attacked is extremely low.

There are less than 125 confirmed cougar attacks in all of North America’s history. After 15 years of trail running and playing outside, I have only ever had one cougar encounter. It was terrifying. He blocked my path and stared at me like an appealing menu item. I had my knife ready, and with all the bluster I could muster, I was able to shout, jump and intimidate the large cat until it sauntered off. I proceeded in the other direction in a state of shock and awe. That day I was running quietly, and alone. Two mistakes. These days I frequently bark like a dog to warn bears and cougars that I am coming through, and I make group trail runs a priority.

Run with friends and take precautions, but most of all get out in the trails and have fun. Trail running is still much safer than running near cars, even with Sasquatch and cougars lurking.