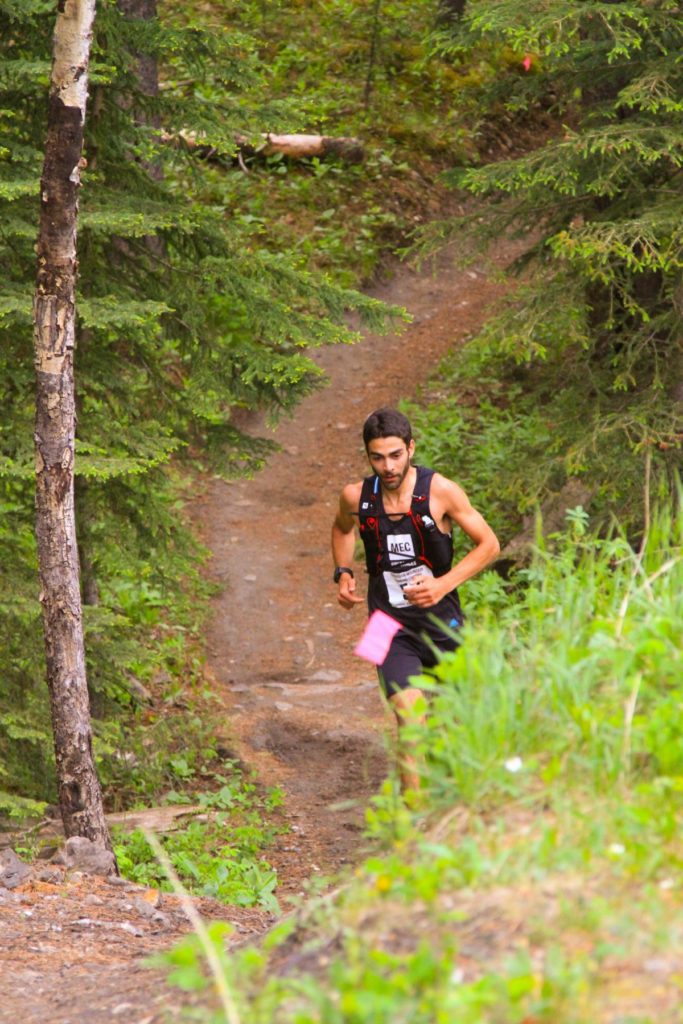 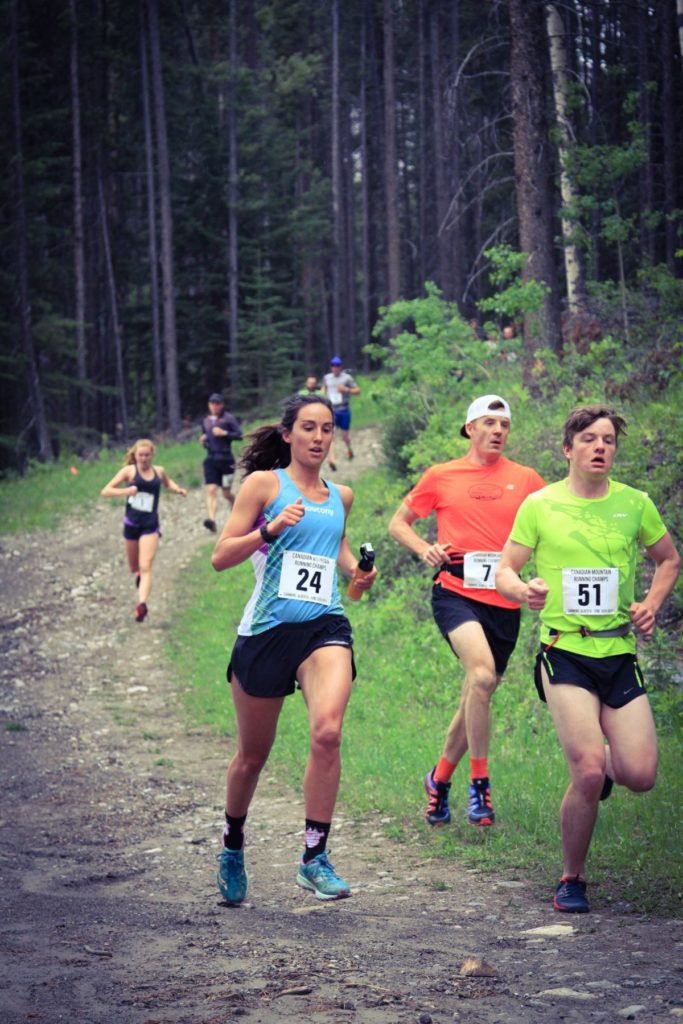 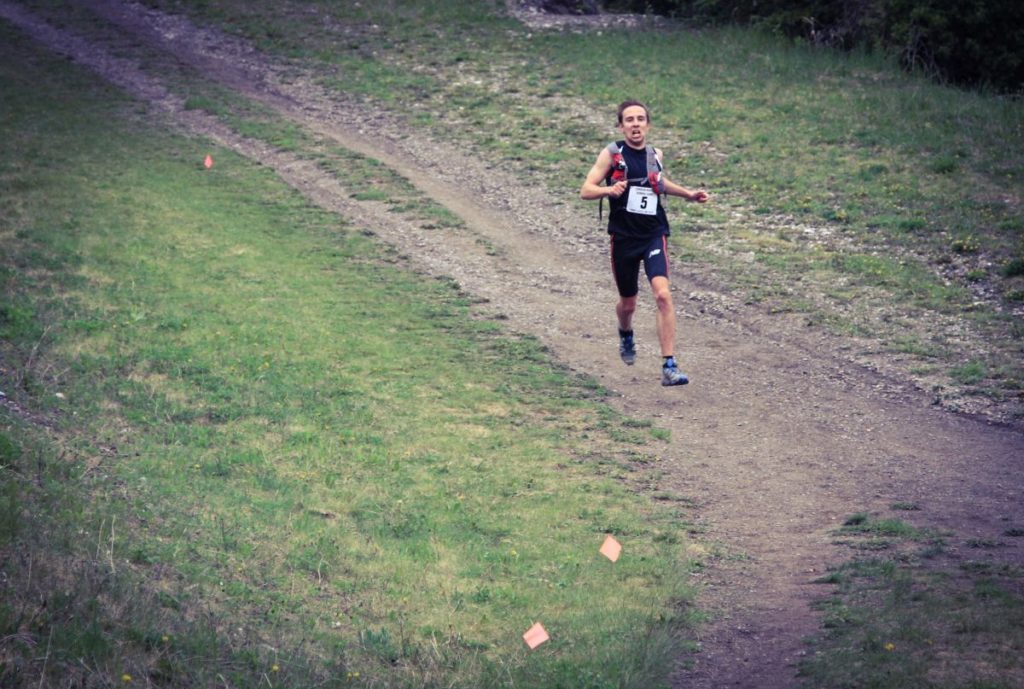 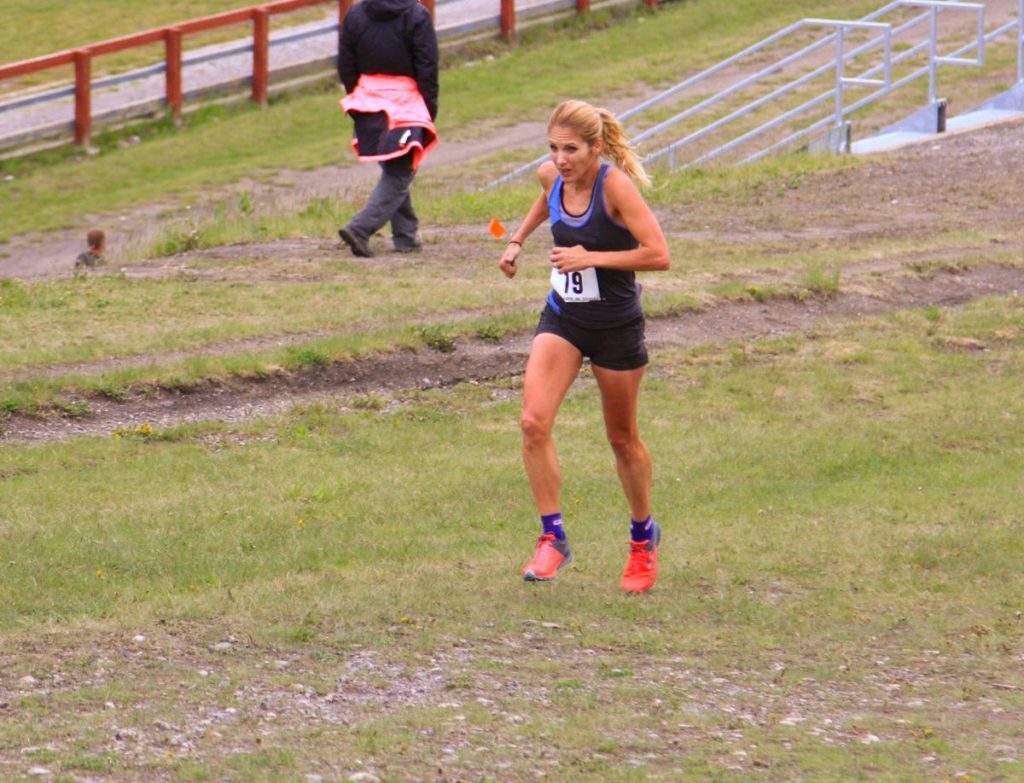 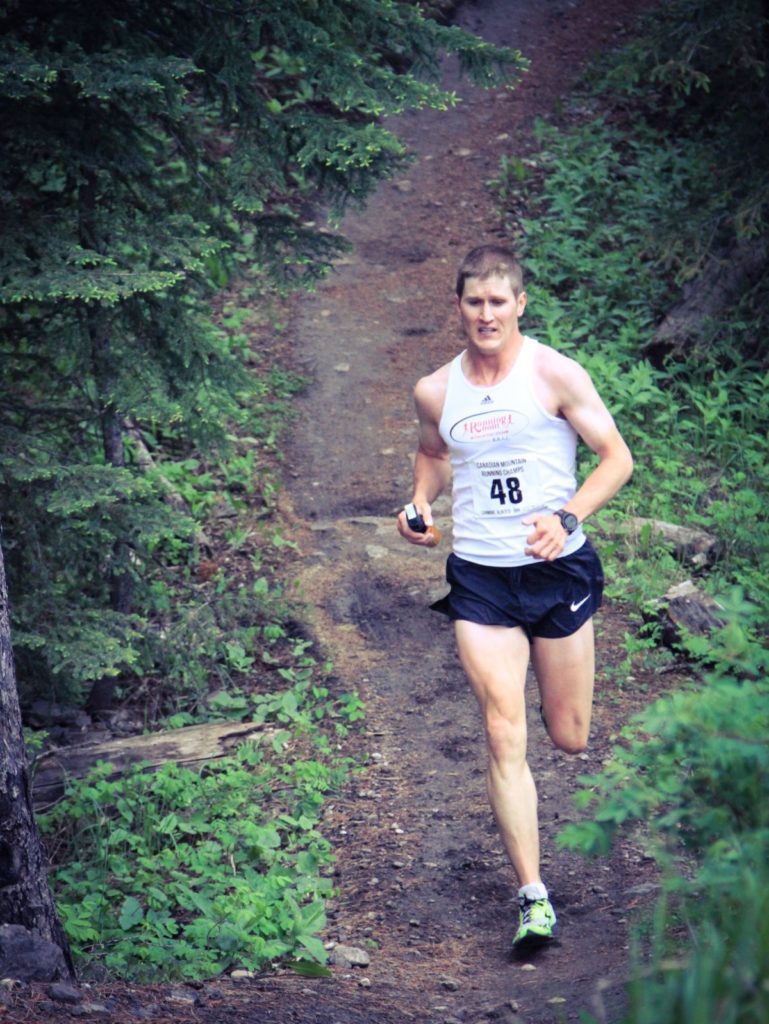 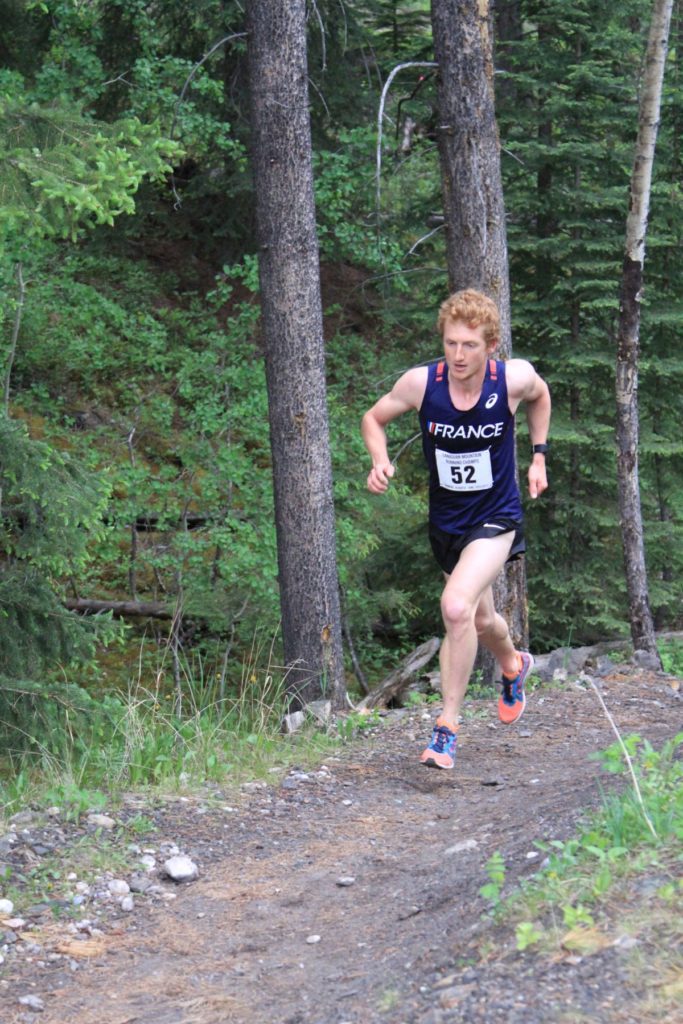 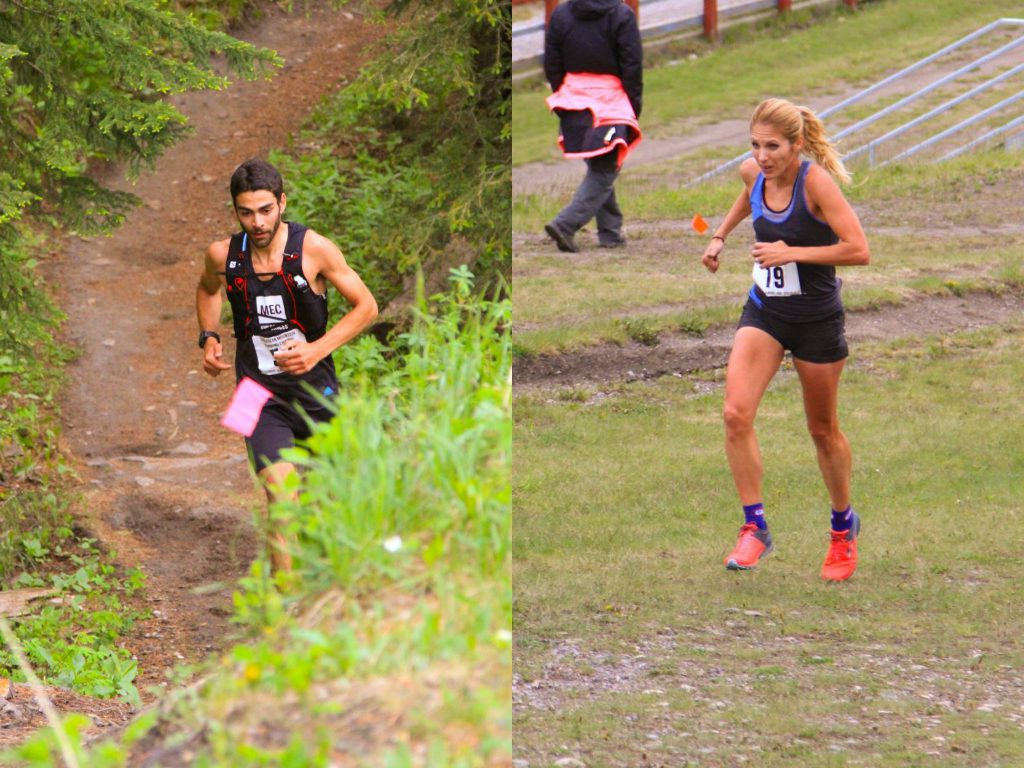 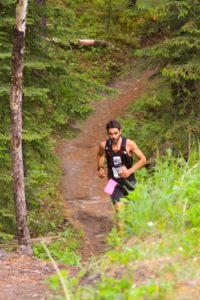 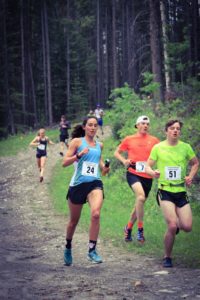 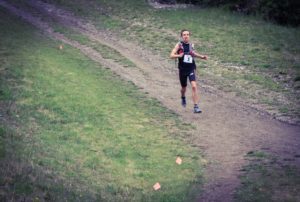 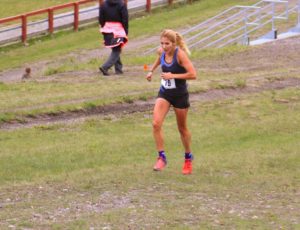 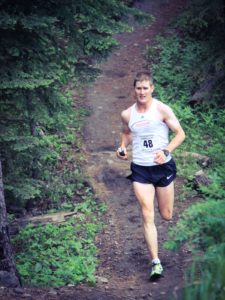 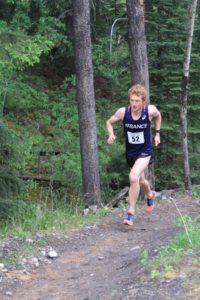 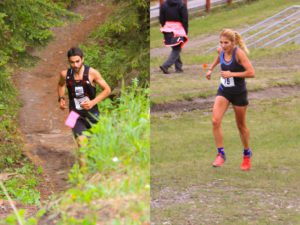 On a cool Saturday morning in Canmore, Alta., the 2017 Canadian Mountain Running Championships, hosted by 5 Peaks and coupled with its sport/enduro/kids’ races, let loose sixty-some athletes into the provincial park.

The route tackled some gnarly climbing on double and single track for the first kilometre and a half or so, then undulating downhill single track, some more climbing and more descending.

Women’s overall winner, Meggan Franks, described the course as a “roller coaster” and an excellent example of the sort of course runners would see on international routes.

“It’s a lot harder on your legs, a little more technical… I thought it was fantastic that the course designer at Canmore found a way to do that,” she says. “Usually when I run nationals, we go up first, then down and that’s it.”

Alberta-born Franks now lives in Mississippi, where she works at the university and coaches some high school students throughout the state. Her husband is both the coach of the Mississippi State University track and field team and her own coach. The downside of being a mountain runner who lives in Mississippi is that her landscape is, um, pretty lacking in mountainous terrain. Leading up to the Canmore race, Franks said that most of her hill workouts were done on her treadmill (equipped with a 15 per cent grade). “There’s a mile-long hill that’s about 35K away that I can train on sometimes. But I work and I have kids so it has to be on the weekends.”

RELATED: How to train for hills where (or when) there are no hills.

The lack of real-life hills didn’t hinder this second-time national champion from dominating the race in Canmore. (Having family in Alberta, however, meant her dad could be her race support.)

“I’m not good at going out really fast — I’m usually pretty cautious. But I tried to take the lead as quickly as I could without being not smart. I felt (at first) I went out a bit too fast but as soon as I hit the single track I was like, no it’s good.” She went on to establish a “safety gap” of about a minute. “I knew there was some talent in the field so I made sure that I had another gear if needed.” The calculated risk worked, as she maintained her lead through the end.

Franks is planning on racing worlds in Italy later this summer, so she’s going to spend, she says, “the next six weeks training as hard as I can” with the hopes of finishing in the top-20.

Men’s winner Matthew Travaglini, by contrast, has had plenty of access to the mountains. The former varsity track runner from the University of Windsor (Ont.) has lived in Calgary for the past year. Working at MEC selling (among other things) running shoes, he has accumulated the types of coworkers who dragged him out to try trail running.

“We’d all meet up in the mountains and go for a run. It definitely helped me (in this race) because being primarily used to track or road running, the tough part is the downhills. Not that they were super technical with the roots and rocks and slippery dirt, but (my) being confident was definitely from my experience with those guys.” He mixed up those workouts with some practices with the University of Calgary Dinos track team.

He says that the Canmore race was the first real mountain race he’s ever done. “I really didn’t know the competition, so I just told myself to go in and try to stick with the leader and be uncomfortable for the first lap, then see what I could do on the second lap.” He broke into a group of three on the first lap, which he managed to escape on the third.

“I tried to work the (last) uphill because I knew that I could get going with the last downhill and I came away with the win,” he says.