This year, runners everywhere made up for the lack of racing opportunities by running fastest known times (FKTs). FKTs are route records that runners have recorded on trails and paths all around the world, and although they can’t replace in-person races, they’re still a way for runners to get a much-needed dose of competition. All FKTs can be found at fastestknowntime.com, so once a route becomes official, it’s released to the public for all to chase. There were so many FKTs run this year, and while we could make a list of the top 25, here are just a few of the best ones we’ve seen in 2020. 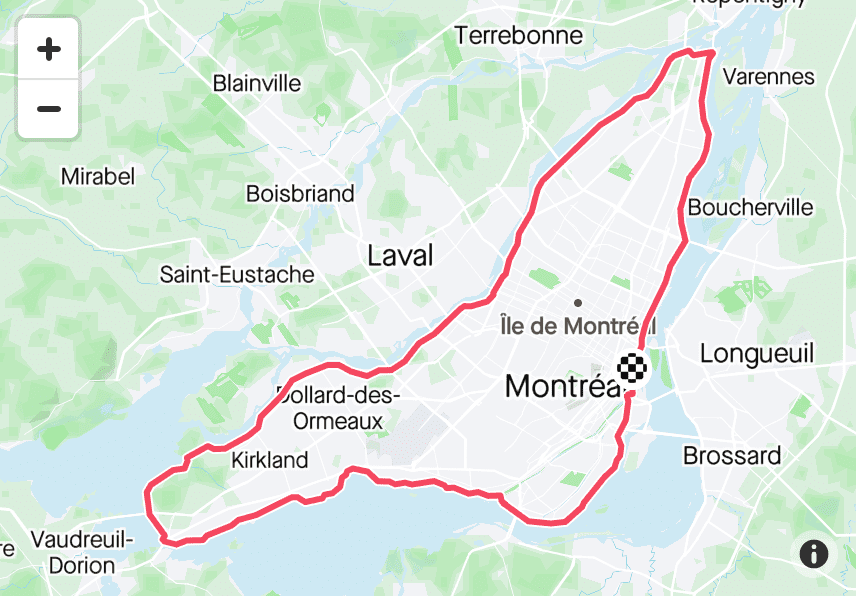 There were many FKTs run and attempted in Canada this year, but we’ve narrowed it down to a top three. First off, we have a route that Quebec ultrarunner Mathieu Blanchard ran in April. Looking for a run to replace his spring race, Blanchard decided to run around the island of Montreal. This 125K run, titled the Montreal Circumnavigation, took him 10 hours, 29 minutes, which is still the FKT for the route.

RELATED: Why distance doesn’t matter when it comes to FKTs

Next up is the Double Canmore Quad Challenge, which Alberta resident Andy Reed ran in July. The traditionally single-lap Canmore Quad is a route that sees runners cover four peaks, running up and down each, as quickly as possible. The Double Canmore Quad is, well, double that, and athletes run each peak twice. The four peaks are the Mount Lady MacDonald, Grotto Mountain, the East End of Rundle and Ha Ling Peak, and after running each twice, Reed’s route worked out to 106K and 10,000m of elevation gain. He completed this gruelling run in 26 hours, 33 minutes, and that FKT still stands several months later.

Finally, there is one of the longest FKTs on Canadian soil: the Bruce Trail FKT. In September, German runner and Toronto resident John Harrison Pockler set off on a nine-day journey, starting in Tobermory, Ont., at the beginning of the Bruce Trail. Almost 900K later, Pockler made it to the other end of the trail in Queenston, Ont. He ran the 890K route in an amazing nine days, 17 hours, beating the previous FKT by four hours.

The FKT that was talked about the most this year has to be the Pennine Way in the U.K. Three athletes conquered the Pennine Way, a 431K route through England and Scotland, in 2020. First to triumph on the route was American ultrarunner John Kelly, who broke the 31-year-old FKT by 40 minutes, running two days, 16 hours and 40 minutes. Not even two weeks later, British ultrarunner Damian Hall smashed Kelly’s time by hours, completing the route in two days, 13 hours and 31 minutes.

Just a couple of months after Kelly and Hall had their battle on the Pennine Way, Hall’s compatriot Sabrina Verjee took a shot at the route. Verjee owned the previous women’s FKT for the route with an 82-hour time to her name. This year, though, she was aiming for a massive jump to a 72-hour result. Horrible weather ultimately prevented her from reaching that goal, but she still ran an enormous PB on the route, finishing in 74 hours, 28 minutes.

Kelly gets another mention on this route, this time for the Grand Round. This challenge included 300K of running and 600K of cycling, and it saw Kelly run several high-profile routes in the U.K. After starting with the 98K Paddy Buckley Round in Wales, Kelly rode 290K to England’s Lake District. There, he ran the 106K Bob Graham Round before hopping back on his bike and riding 320K to Scotland, where he ran the 96K Ramsay Round. This was an absolutely wild challenge that Kelly finished in five days, and although it’s not on the official FKT website, it still deserves a spot on this list.

Perhaps the coolest of all FKTs in 2020 was run by a three-women team on a route called the Grand Canyon R2R2R-alt. In October, Suzanne “Sunny” Stroeer of Germany and Americans Christin Douglas and Lexi Miller started their 72K journey on the South Rim of the Grand Canyon. From there, they ran down into the canyon, jumped into the frigid waters of the Colorado River and then continued running up to the North Rim. That was only half of their run, though, and after hitting the North Rim, they turned around and returned to the start.

Running from rim to rim to rim (hence the name R2R2R), this is an incredibly difficult challenge. Throwing in the two swims across the river makes it even cooler (literally). The women finished the route in 22 hours, 27 minutes, and although this is the only known time women have completed this run, it’s still a really impressive time, and it could remain the FKT for quite a while.