WHEN LIGHTNING crackles, flat Winnipeg roads are inhospitable for running. Thunder overhead warns against heading out to run on this Prairie landscape but still Jacob Morris sits in his van, stubbornly searching on his smartphone for a running article that tells him that it’s perfectly safe to run on flat landscape in a thunderstorm. He doesn’t find one. You can’t compromise with lightning strong enough to divide the sky and so the run must be postponed. The 26-year-old stops looking, and waits patiently for the gloomy weather to disappear.

“No matter where you are whether it’s rural Manitoba or downtown Calgary or the heart of Halifax, depression and anxiety are affecting people everywhere.”

In the van with him on this day is his team. They are making a documentary about Morris. Winnipeg is one of the many stops they make in a month-long period this summer. While waiting for the storm to clear, Morris thinks about the challenge he has taken on. Called Run To Wellness, it’s a goal to run a half-marathon in 10 Canadians locations in 30 days while furthering the national discussion surrounding mental health. In the summer of 2016, Morris’ most difficult period is behind him but since running played such a big role in ending his period of anxiety and depression, he decided to take on this challenge to give hope to others going through a similar struggle. If he can run this series of half-marathons around the country, despite how he was feeling a year and a half ago, others can hopefully gain emotional strength from that.

“We wanted to take on all of Canada to show that no matter where you are whether it’s rural Manitoba or downtown Calgary or the heart of Halifax, depression and anxiety are affecting people everywhere,” says Morris. There’s another twist: since Morris, has roots in the film industry, the team is making the cross-Canada trip into a documentary to be released in a few months. In that sense, the month-long trip is partly the happy ending of Morris’ struggle with depression, partly a mental health campaign, and partly a career-related project. 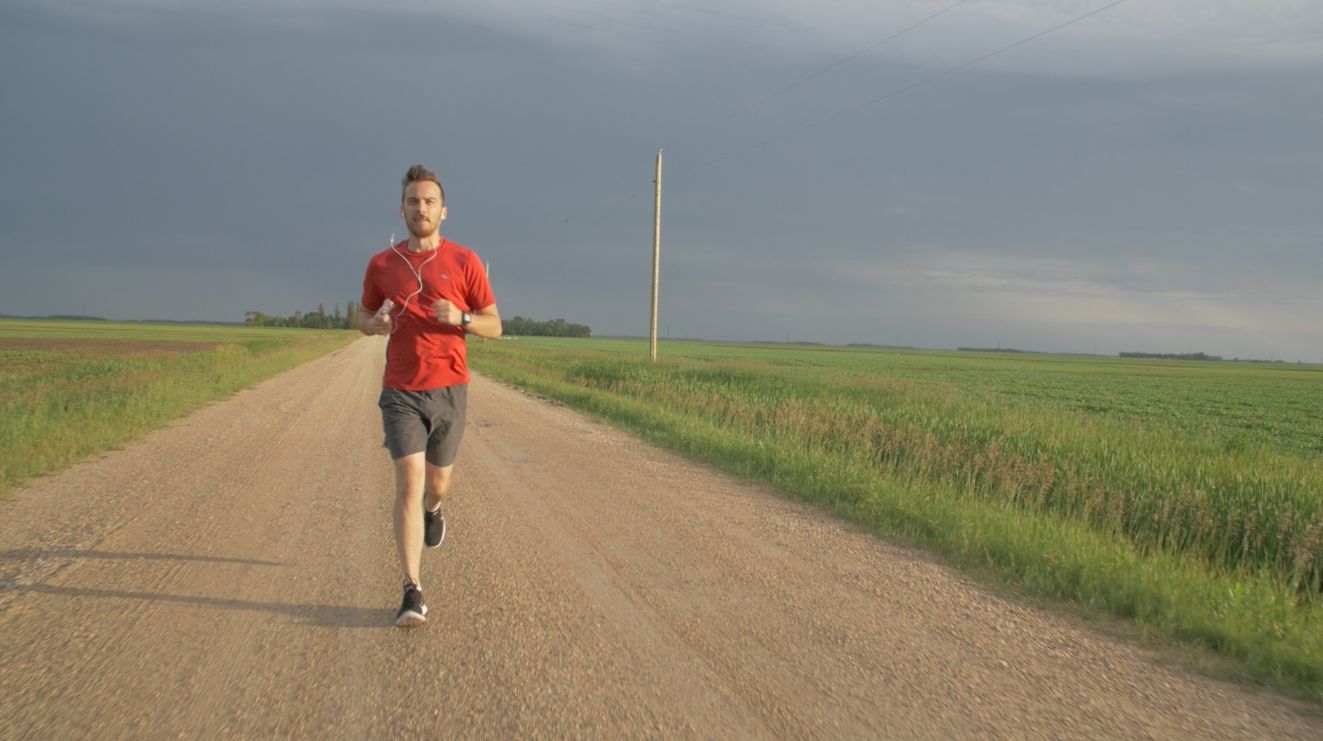 “There were times when I felt like I was dying but part of me was OK with that.”

NEARLY TWO YEARS AGO, Morris was working full time as a video producer. It was busy, fast-paced, demanding and more than full time. It was the industry he aimed to be in, yes. But work-related stress was the leader in a long domino line and it wasn’t long before other parts of his life started to fall. He wasn’t looking forward to anything. He felt stuck and anxiety was taking over. “There was a lot of work stress and I wasn’t doing things I was passionate about,” he says. “I was waking up every night with panic attacks. There were times when I felt like I was dying but part of me was OK with that.”

That was the winter of 2015. At first, he pushed on convinced it would pass but instead he started keeping to himself more and more. When he did see friends, it was easy to fake it and act cheerful. His friends know his as that energetic person– the one who is outgoing and friendly at parties. “I could turn on that facade and be that person,” he says. In reality, he’d wake up unenthusiastic for each day and begin the a.m. hours debating with himself on whether or not it was even worth getting out of bed.

By February of that winter, things hadn’t improved. They had gotten worse. He came to the realization that something was horribly off and he would have to make some sort of change. It was something he was alone in at the time as he hadn’t yet figured out how to voice his concerns. “I was someone who bottled up all of my emotions,” Morris explains. “Coming to terms with the fact that I was suffering, that was the hardest thing for me to overcome– saying ‘I’m not OK right now.'” 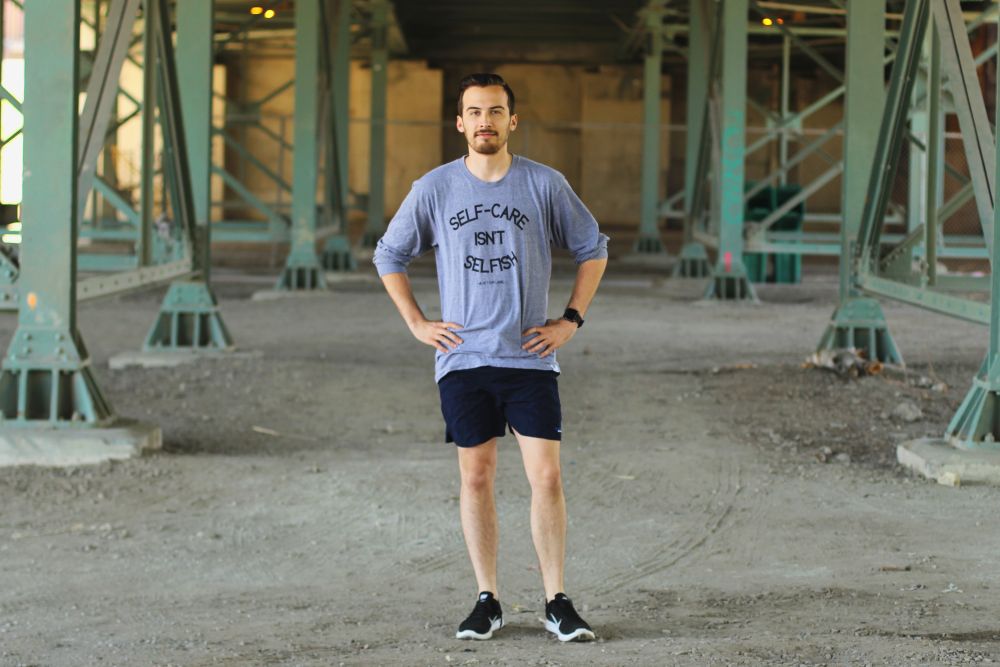 “Running was definitely something that saved me.”

Running is cheap therapy. That cliche has been working overtime but it’s true. Morris says that February of 2015 was his hardest period. Soon after, he joined the ever-expanding group of runners who take to their running routes, wear down the rubber soles of their favourite shoes and smile at the battered pair. It’s a souvenir of their fight against mental health issues.

For Morris, the running started with basic runs around the block in his Toronto neighbourhood. He returned from the first one feeling a sense of ease that hadn’t previously been there. It was as if he had found a way to chip away at that day’s anxiety. Even if he had just put a slight dent in that problem, it felt good. “That’s when I discovered running because it’s something I could do for myself,” Morris says. It was good to have a goal. He kept working at increasing the distance and liked the sense of community he got from the running scene. So he kept at it. “That was the building blocks of learning how to deal with my mental health.” Gradually, he went out more and more building up distance as he went along. One day, it seems he made a breakthrough: while out for a comfortable and easy 5K run (an easy distance at that point) he felt strong so he continued. Morris wound up running the half-marathon distance for the first time. It was the starting of Run To Wellness, though he didn’t know it.

By May of that same year, things were picking up. “I was really developing myself as a runner,” he says. Now, it felt like he had some sort of grasp on the mental health issues he had been facing. When once, he was a closed book, now he began explaining what had been going on to his friends, family and girlfriend. “Running was definitely something that saved me,” Morris says. 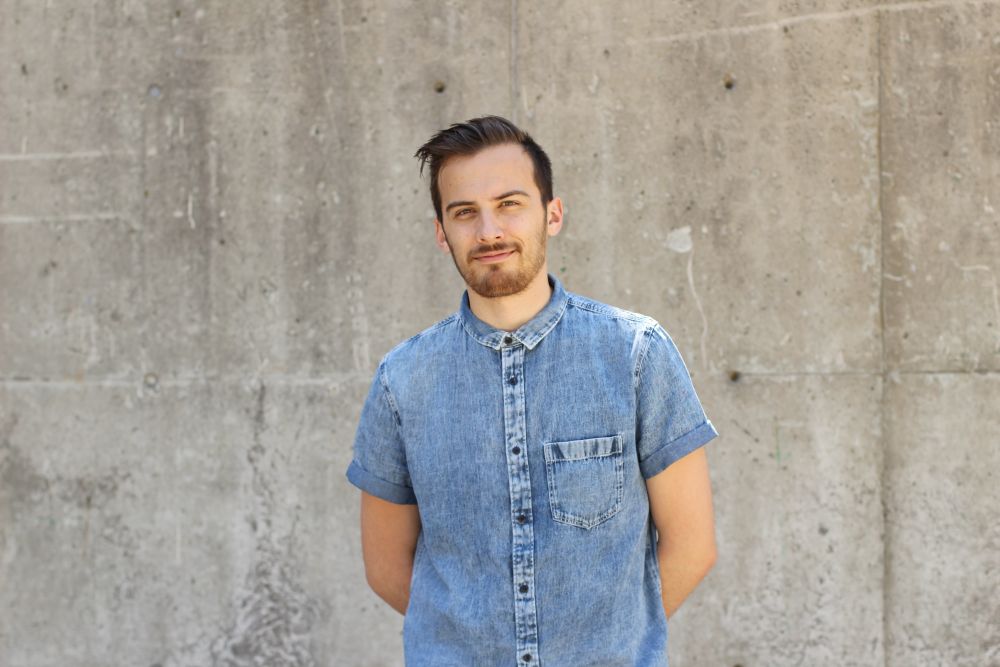 FROM LATE SPRING onward, he continued to commit to the main thing in his life that was helping him cope: running. It evolved and as he ran through the summer of 2015, his winter state of mind faded. When early fall rolled around, he got an idea. “I said ‘Why not take what I’m doing in my career and use my voice to add to the national mental health conversation by taking on a challenge,'” says Morris. It became to mental health campaign Run To Wellness and he partnered with the Centre for Addiction and Mental Health (CAMH).

The main point of the campaign is showing people suffering with mental health conditions that there is a way to gain control back. Morris has run half-marathons (not at official races) in prime locations of Canada such as Vancouver, Calgary, Edmonton, Halifax, Winnipeg and hometown Waterloo, Ont. As part of this, he has opened up to strangers about his story. He finished his half-marathon runs earlier this summer. The response from those who he has close relationships was a positive one. Getting feedback from strangers though, prompted him to continue. “It was difficult at the start to open my mouth and talk about my struggles. I found it really encouraging to receive messages,” he says.

The demanding producer job is now behind him as he takes a different approach to his career– freelance film projects and continuing to work on this autobiographical documentary being two focuses which he puts his energy into. These activities have brought the passion back to his day again. This newfound career satisfaction is a result of what the running lifestyle brought in to his life. “While I’m in a good place right now, one of my coping strategies was physical activity,” says Morris.

SITTING IN THE VAN with his crew in Winnipeg, Morris expected the storm wouldn’t last all day. The rain let up. From his seat in the car, he looked through the window and watched the storm clear. When it did, he got out for his run.