In 2018, the International Paralympic Committee placed height limitations on runners using prostheses (commonly referred to as blades), forcing many to use shorter blades in competition than they would usually wear. The rule was put in place under the assumption that taller athletes have an unfair advantage in races, but a University of Colorado study published today suggests that tall does not actually mean faster.

“We found that height makes no difference when it comes to maximum speed,” Alena Grabowski told CU Boulder Today. Grabowski is one of the authors on the study and an assistant professor in the Department of Integrative Physiology at the University of Colorado. Grabowski also pointed out that athletes are forced to purchase extra blades and equipment because of this rule, which she says isn’t based on science.

Grabowski and the rest of the research team monitored five elite sprinters who have double below-the-knee amputations while they ran on a treadmill. During the tests, the runners used different types of blades and a variety of combinations of stiffness and height, adding up to 15 tests in total. 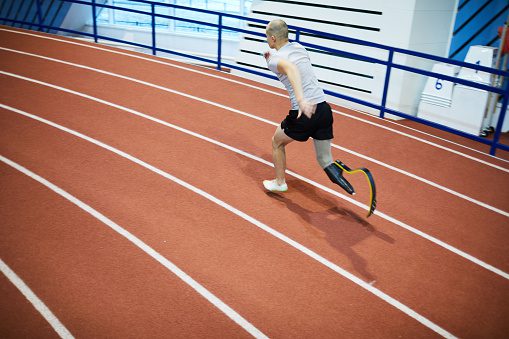 The test was simple, with the athletes starting at a jog and working up to their maximum speed. The fastest speed reached by any of the subjects was 10.8 metres per second, which works out to about 1:33 per kilometre. In addition to watching their speed, the researchers monitored the subjects’ biomechanics as the speed increased with the different combinations of blades.

Ultimately, the team found that it was the shape of the blade which makes a difference in speed, not the stiffness or height. Using J-shaped blades, subjects reached speeds eight per cent faster than in the C-shaped alternative.

“Biomechanically, the idea makes sense: Longer legs equal longer steps, so you would think you should be able to run faster,” Paolo Taboga, another author on the study, said. “But we found that while you do take longer steps, you cycle your legs slower so in the end the two even out.”

For now, blade runners will have to continue to adhere to this rule, but the research team hopes to conduct another study with a larger sample group in an effort to convince the IPC to remove the height restrictions altogether.