After the success of its inaugural year, the North American Golden Trail National Series (GTNS) will be returning in 2022, sponsor Salomon has announced. Runners are invited to race any of the five U.S. and Canada-based races for a chance to compete in the GTNS Grand Final at Madeira Ocean Trails in Madeira, Portugal in October. 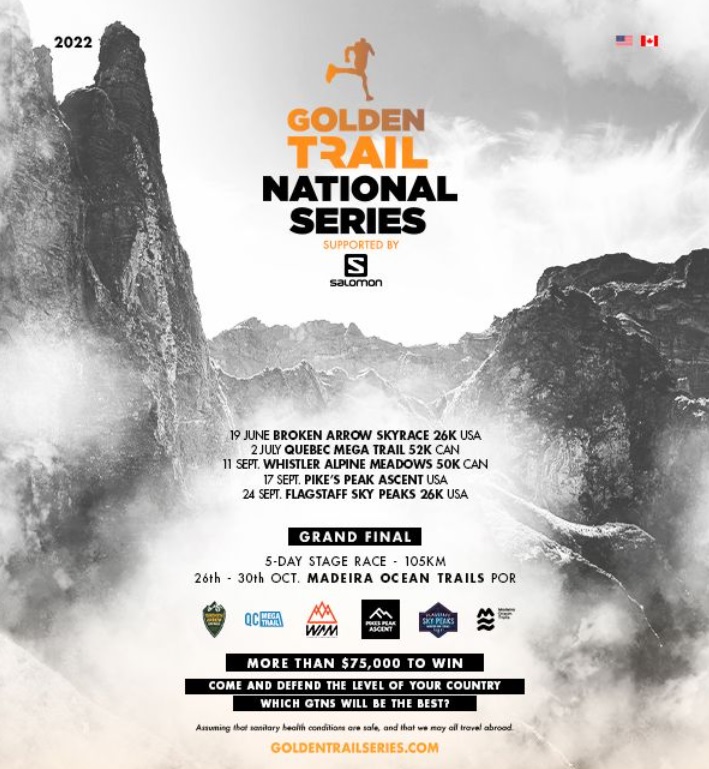 The 2022 series is comprised of four qualifying races and a final, all of which will take place in either Canada or the U.S. The top two men and women from each GTNS race will be invited to race the final at Flagstaff Sky Peaks, and from there, the top three men and top three women will receive an invitation to race the Grand Final at Madeira Ocean Trails, which will feature the top athletes from each of the seven GTNS around the world.

The five races that make up the series are:

The Broken Arrow 26K showcases some of Palisades Tahoe’s most famous terrain. From the valley floor at 6,200 feet, runners will ascend nearly 5,000 feet as they navigate the rugged terrain of one of North America’s most challenging ski resorts. The course is characterized by plenty of vertical gain over a technical and physically-demanding landscape that’s mostly above the tree line.

The Quebec Mega Trail 50K is the biggest ultra-trail competition in Canada, and features over
7,775 feet of vertical gain throughout the course. The race starts in the village of Saint-Tite des
Caps and then climbs up the challenging Mestachibo trail. Runners will then complete two ascents and
two descents of Mont-Sainte-Anne (MSA), finishing with a 21 km loop in the northern trails of
MSA.

Starting with one massive climb, the Whistler Alpine Meadows 50K is a full point-to-point race route that features 9,200 feet of elevation gain. Beginning at Whistler’s Cheakamus Canyon area, the course heads over the very top of Whistler Mountain to bring runners along Singing Pass and finishes up on the challenging windy single track of the Comfortably Numb trail system.

The Pikes Peak Ascent is a half marathon distance to the summit of Pikes Peak with an ​elevation
gain (start to summit) of 7,815 feet (2,382m).The course runs mostly on Barr Trail, which has an average grade of 11 per cent, is often narrow, winding, or steep along with sharp turns and abrupt changes in elevation or direction.


The Flagstaff Sky Peaks 26K will feature some of the top trail runners in the world going head-to-head on the volcanic edge of the San Francisco Peaks. Runners will climb for the first 6 miles from the base of Agassiz Peak to the slopes of Arizona Snowbowl Ski Resort. From there, runners will ascend nearly 2,000 feet (610m) in the next mile, topping out at just over 11,500 feet, before heading back down through winding single track onto the iconic Arizona Trail, which spans 800+ miles from Mexico to Utah.

The Ultra-Trail World Tour series comes to an end

“We are thrilled to bring the Golden Trail National Series back to North America this year after seeing so
much involvement and support from the trail running community in 2021,” says Stephanie Gardner, sports marketing manager for Salomon USA. “By continuing this race series, we can help further invest in the North American trail running community and provide them opportunities to compete at a global level.”

For more information about this year’s series, check out the GTNS website.