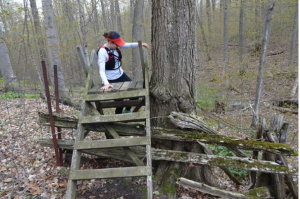 Rhonda-Marie Avery, a 36-year-old runner from Barrie, Ont., finished a 20-day, 885 km run and hike down the entire Bruce Trail, starting at the northern end of the trail in Tobermory, Ont., and ends outside Niagara in Queenston Heights. The run concluded on Saturday.

Avery was born with Achromatopsia and only has 8 per cent vision but is still an avid runner, swimmer and cyclist.

“There’s so much danger potential. No one really expects this from someone who trembles walking across a Wal-Mart parking lot,” Avery told the Welland Tribune. She had been running each day since Aug. 4, when she left Tobermory, accompanied for five days of the trip by Cody Gilles, who has plenty of experience on the Bruce Trail himself. In 2012, Gilles set the record for the fastest running of the entire trail at 12 days, seven hours and 39 minutes.

Avery, also a mother of three, ran the route with guides the entire way that helped her navigate the trail. The guides run ahead and behind her, calling out obstacles and potential hazards to Avery and each other.

“If there weren’t other people calling things out, I would have been dead the first day,” she said.

The run was used to raise funds for Achilles Canada, an organization that connects disabled athletes with guides, allowing them to compete in events they otherwise would not be able to.

She spent over 10 hours on the trail each day, with some days nearing 14 hours of hiking and running.