One of Canada’s oldest events has a great field and more than 16,000 runners, and could see course records in both the half and marathon

One of Canada’s oldest marathons will be celebrating a milestone year potentially with course records.

The BMO Vancouver Marathon has brought together perhaps its strongest elite field ever for Sunday’s 45th running. The men’s race features two East Africans who have run 2:10. Ethiopia’s Gemechu Lemma (2:10:02) and Kenya’s Jonathan Kipchrichir (2:10:27) are the class of the field, and it should be a two-man assault on the event’s record of 2:13:40. The course has been changed multiple times since Australia’s Garry Henry ran 2:13:40 back in 1980. The modern course, which we’ve selected as one of the most beautiful in Canada, is also challenging, with a few significant hills. Look for them to go out at 2:12 pace and hope that Sunday’s warm forecast doesn’t curtail their attempt in the second half.

Related: check out this crazy timelapse video of the 2015 BMO Vancouver Marathon

On the women’s side, it should be a thriller. Canada’s Lioudmila Kortchaguina has returned to defend her title. As one of Canada’s top masters runners, she has both the experience on this tricky course and the speed to win for a second year in a row. Her top competition should be two much younger runners from Ethiopia. Elsa Taffera (29) ran 2:32 last year and Hirut Gangue (24), who placed second in Vancouver in 2015, ran 2:34 when she was just 20. A third top Ethiopian, Dehininet Jara could also be a factor, having run a 2:35 in China in 2015.

But don’t count out two tough Canadians. Ellie Greenwood ran 2:42 for the win in Vancouver back in 2012 and knows the course well, also running the race last year. She’s one of the best ultrarunners in the world and should never be underestimated. She plans on using this race as a hard training effort for next month’s Comrades Marathon (an 89K race in South Africa). Another local trail specialist, Katrin Jones, could contend. She ran a 2:42 PB last year in Ottawa and placed third in 2013 at this race. Finally, Canadian Jessica Harper, who turns 24 on race day, hopes to improve her personal best of 2:48:21 from last year at Chicago. Could she sneak in to a podium position with a breakthrough run?

The half-marathon could be the most exciting event in Vancouver on Sunday. It’s playing double duty as the B.C. championships, so a great local field will produce many quick times. 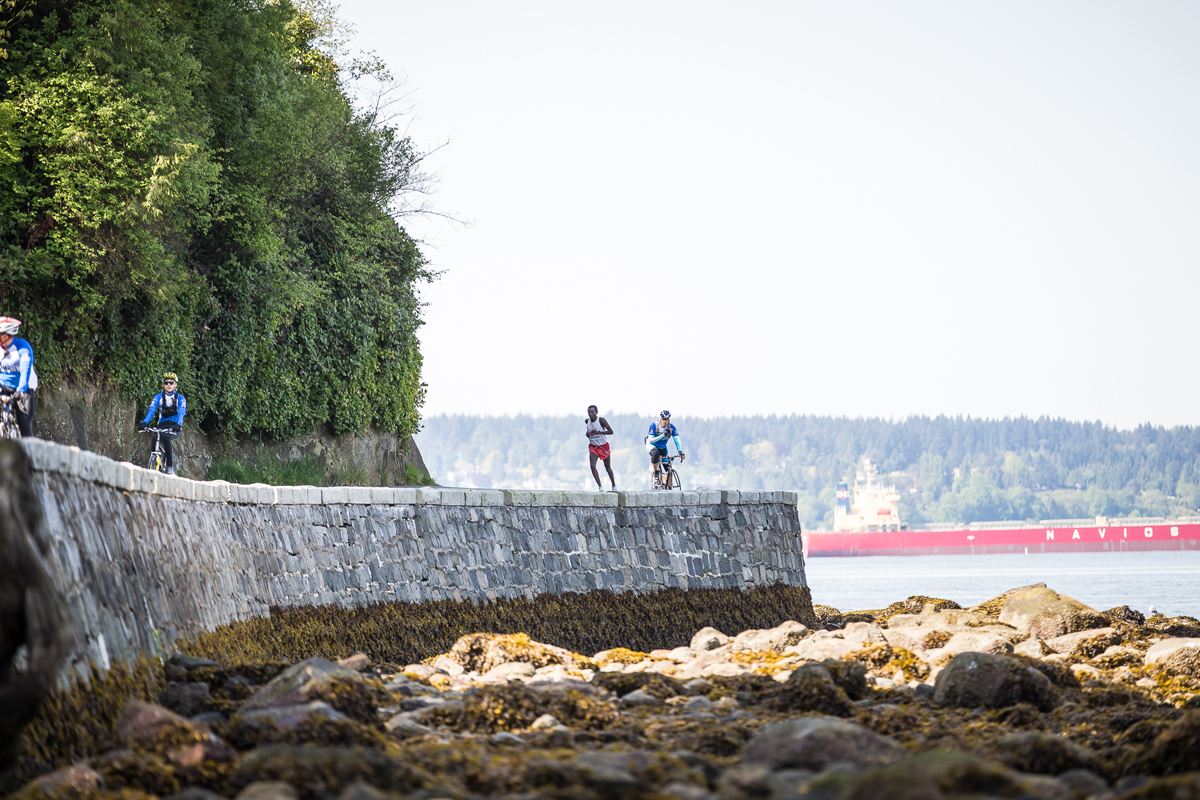 Up front, Kenyan Paul Kimugul is back after setting the course record of 1:02:36 in 2014. He’ll be in tough with his training partner Christopher Cheruiyot, a 24-year-old who ran an impressive 1:01:42 last year. They could both be in trouble if Ethiopian Wabi Adisa Gudeta is on his game. The 28-year-old clocked 1:01:12 last year.

Locally, the B.C. title should be hotly contested by a group of strong sub-1:10 runners. Former Speed River athlete Terence Attema has moved out the west coast and is in the field. Kevin Coffey, Nick Hastie and Nicholas Browne will also line up, as will veterans Jim Finlayson and Jerry Ziak.

On the women’s side, the course record could easily fall as well. Returning champ and record-holder, Jane Murage of Kenya, is back and in great shape, aiming to run faster than last year’s 1:12:53. She ran 1:11 a few years ago, and will be pushed by fellow countrywoman Lenah Jerotich. The 28-year-old ran 1:11:29 at the Cardiff Half-Marathon in 2015.

The women’s B.C. half championships will be headlined by Sabrina Wilkie and Lisa Brooking. Wilkie has had a solid comeback year after giving birth to her son in 2015. Brooking, who moved out west a few years ago after running for the University of Windsor, has a comparable PB (1:17) to Wilkie, which could produce a fast result for both runners.