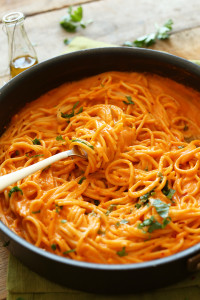 Most people seem to associate eating pasta with running marathons. I’m not a huge fan of pasta. I’d prefer to have my carb source be from yams, rice, or quinoa. (Unless we’re talking macaroni and cheese, in which case I love pasta) That being said, it is nice to mix things up a bit. The other night I was on a Pinterest recipe binge and found several which called for nutritional yeast. It’s not an ingredient I’m familiar with so I did some research to figure out what the deal was. It’s really popular with vegans and vegetarians as it has a very nutty, creamy or cheesy flavouring which is a fantastic substitute for cheese in sauces, toppings or spreads. I adore cheese so it’s hard to buy into a cheese substitute; nothing else can truly stand in for cheese. Still, nutritional yeast is also high in vitamin B, which is great for runners. So, knowing these things, I wanted to try a recipe that calls for nutritional yeast.

The Minimalist Baker has lots of vegan and vegetarian recipes so I knew that was going to be good place to check for some recipes. I came across a recipe for vegan roasted red pepper pasta, which has a creamy sauce which looked fantastic. Relatively simple to make, just a little bit of time to roast the peppers but all the other prep can be done in the waiting time. It’s supposed to be a vegan meal, but I added in broccoli and some roasted chicken to ramp up the protein and fibre content of the meal. It worked out wonderfully. So, I can safely say that, from my one experience with nutritional yeast, I’ll try some other recipes.