Runners tend to be a competitive bunch. If you aren’t Olympic-bound, fear not, there are still world records out there within your grasp. Canadian Running has compiled some of our favourite random running records – if you try to beat any of them, let us know!

1)   Fastest marathon while carrying an egg on a spoon

Dale Lyons of the UK ran the London Marathon while carrying an egg on a dessert spoon in 1990. To beat his record, you would have to run faster than 3 hours and 47 minutes, with your own precarious cargo.

2)   Most runners to complete a marathon while linked together

At the iWelt Marathon in Germany in 2012, 73 friends from the group known as CaBa’s CaBaNauTeN, ran while linked together. If you have the ability to convince 74 friends to take part in such an attempt, we’re already impressed.

Stephen McAdam and Nathan Saber ran Geelong Cross Country Club Half Marathon of Victoria, Australia in 2012 wearing a two-person pantomime costume. To beat them, you would have to complete the race with a time faster than 2 hours, 3 minutes and 20 seconds.

4)   Fastest marathon in a superhero costume 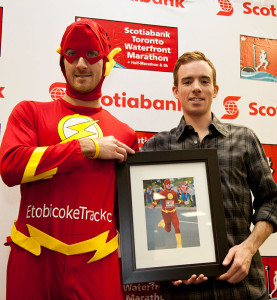 Superhero costumes are a staple at many road race start lines. Next time you see one, you might want to ask if the wearer is chasing a record of some sort, like Stephane Hetherington did at the Scotiabank Toronto Waterfront Marathon. He ran the race in 2 hours, 33 minutes and 58 seconds while dressed as “The Flash.”

If you don’t think you can chase down a speed record, why not focus on the ridiculousness of your outfit, like Jean Paul Delacy of the UK did when he ran the London Marathon in 2010 while dressed in a 7.04m giraffe costume. 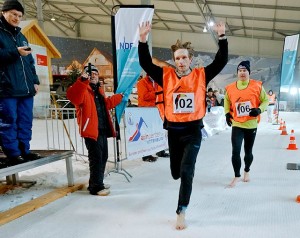 In January, 2013, 361 runners participated barefoot and on ice in Heerenveen, Netherlands. Maybe an attempt to break this record is just what the wavering barefoot running movement needs to rekindle its fervour.

David Babcock knitted a 3.70m scarf as he ran the Kansas City Marathon in 2013. We award him the title of “Ultimate Multi-tasker.”

8)   Oldest couple to complete a marathon together 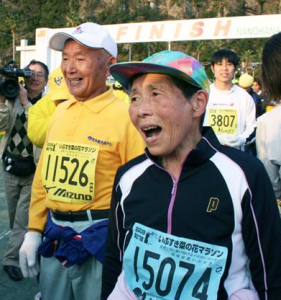 Shigetsugu Anan and his wife, Miyoko Anan, aged 83 and 78, became the oldest couple to complete a marathon together after they finished the Ibusuki Nanohana Marathon with a time of 7 hours, 36 minutes and 22 seconds. They ran the entire race side by side (which makes our hearts melt a little).

In 2011, James Fraser of the UK ran the Yeovil Half Marathon while wearing a functioning respirator. He finished with a time of 1 hour, 51 minutes and 31 seconds.

10) The most rubik’s cubes solved while running a marathon

The record is particularly impressive to those of us mere mortals who wouldn’t be able to solve a rubik’s cube if given a indefinite amount of time to work on it. Shane White completed 175 cubes while running the Rock ‘n’ Roll Savannah Marathon in Georgia, USA in 2012.