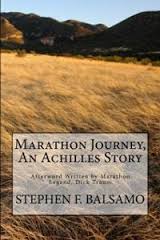 Stephen F. Balsamo’s novel, Marathon Journey, An Achilles Story is a touching edition to the growing genre of inspirational running books. Though Marathon Journey is a work of fiction, the protagonist Adamu’s life bears similarities to that of Lopez Lomong, the South Sudanese refugee turned American Olympic track athlete, who was the flag bearer for the United States in the 2008 Summer Olympics. Like Lomong, Adamu flees the violence of the Sudan, bringing his love of running to the United States. Those who enjoyed Lomong’s autobiography, Running for My Life, published in 2012, may want to check out Marathon Journey.

Instead of chapters, Balsamo breaks the book into “miles” of plot (totaling 26 segments, mimicking the marathon), taking readers from the flatlands of the Southern Sudan to Oregon, the American running Mecca, and finally to New York, for the revered New York City Marathon. The novel weaves together the story of Adamu with that of his American sponsor, William, an ex-collegiate track athlete in the midst of a mid-life crisis and coach Bellinger, a mourning retiree with nothing left to live for. Together they push their physical limits and in return, find peace with their pasts.

Though at times, the dialogue is stilted, Balsamo’s heart-warming story shines through in this novel of healing and friendship. Their training for the iconic New York City Marathon is a tale of beating the odds and running for others, as well as yourself. New runners will sprint through Marathon Journey’s fast-moving plot and find motivation in the drive of an innocent young man with a horrific past, to run simply for the joy of it.